Sent off one of my favourite psa 10 cards for reholder due to debri and weird square scratches on the plastic, which was affecting the eye appeal of the graded card.

After getting back my card, I immediately spotted some whitening that wasn’t there before.

Will think twice now before reholdering any more cards unless it is necessary.
Have not looked at my previous graded submissions, who knows how many of them have extra damage caused by PSA, even though they can be small and not that noticeable.

Thanks for reading and have a good day

So sorry for you, even as they are minimal damages it still sucks, what card was it?
Opening a slab even by PSA has its risks I guess… but when you send them to PSA you expect that things like this shouldnt happen. I never used the reholder service, but was about to send a 1st ed spanish charizard as it was an older cert, but now that I will be attending to an arita signing event I will crack it myself… wish me luck

I can’t claim any compensation though. The damage is so minor that it looks like an ordinary psa 10. What a bummer. Can’t do anything about it.

I’ve read about this multiple times so I’m afraid to re-holder my older label expensive PSA 10s as much as I’d want to make them consistent with my other slabs. I’ve read that Beckett is more gentle with cards from a few users on here who’ve done it but that could just be luck for all we know. For what it’s worth, I’ve seen even worse than this. I don’t know if the thread is still out there, but one guy had his PSA 10 Unikarp re-holdered and the edge really got chewed up that it almost would be a PSA 8 if re-graded probably which was really sad because it’s such an expensive card.

Yea I remember I read the unikarp post before. Tragic.

I had some cards came back with damage I didn’t see before but didn’t take any before photos. These were for grading not reholder. Thought I might have miss out the damage but looks like psa do and can actually damage cards in their hands.

Have another card that just finished reholdering. After seeing the scans at psa, I see some new whitening at the edge. Sighs PSA. Disappointing.

I’m not sure what PSA’s damage rate is, but I suspect that it is lower than what we would assume. Just to add to the sample size here, I’ve had about ~5 reholders this year with no problems. We might be biased toward focusing on the negative events because nobody highlights their positive experiences.

That said, it is really awful when it does happen

I had a PSA 10 sports card (over 5k usd value) that I sent in to get reholdered. The card came back with a piece of plastic inside which dented the card since it was caught inside the slab during the reslabbing process. After a couple months, PSA finally confirmed their fault and compensated me the market value difference between PSA 10 vs PSA 9 (the new grade assigned due to the damage). Overall, I lost over 1.5k usd due to the negligence of PSA.

This said, I still use PSA since they are Pokemon market standard…

Sorry to hear that buddy. Yea still gonna use psa since they hold the best value for Pokémon.

I just feel disappointed and frustrated that I sent 2 valuable cards for expedited reholder at different times in different submissions, and yet both came back with extra damage/whitening. I would expect psa to be experts in cracking their holders, and managing the cards with care.

I’m not gonna have any expectations for psa anymore. Psa damages my card again when I send it for grading/reholder? It’s fine I’ll take it since it’s still a psa 10. At most I’ll just sell it. It’s all up to luck anyway, all out of my control.

Hi all, my second expedited reholder from another submission just came back.

Sadly to say, they did not exercise enough care and manage to damage this card even worse than my first card in this post. 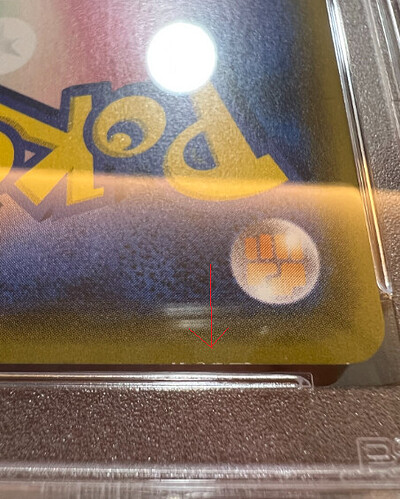 PSA is the leading grading company for collectibles. I always thought the chances of damage by PSA is overblown. But to get two different high value cards damaged back to back in two different submissions? Thanks PSA, love ya. Thanks for making my psa 10 into a weak 10. Might have to try out CGC soon.

no need for assignment when they’re already handling everything AAAYYYYYYYYY

That’s too bad for sure! I’ve read a couple stories with CGC & card damage as well, but not in regards to re-holder service. You can find a recent discussion here: CGC Damaged card, trying to determine next steps

In addition, I also read a couple stories of people having their cards suddenly ‘lost’ when sent to CGC. This was during the backlog/busy period though. Some people think their cards were stolen, but it’s really hard to say. Leonhart also posted a very in-depth video when he was tracking down his lost Charizard he sent to PSA that got lost for months and it finally showed up after a very long time.

So overall, it seems that every grading company can have issues at times with these things. None of them are perfect, unfortunately.

Not saying this is entirely the case or even the case at all in your situation, but…

We have an ability to overlook certain things when we own a card and/or not looking over it with as much scrutiny as we do when we are looking for damage. I STILL send cards in for grading, get them back and see something I swear wasn’t there. Check it again and again, then the images and realize it was. Cards inside a PSA case are even more difficult due to the glare and edges of the holder inside the case. Not to mention pictures can look wildly different with even the small amount of light and angle and backdrop, so the before and after would need to be exactly the same, especially Japanese new backs.

Thanks for the input. Don’t think it applies to my case here sadly. I’ve make sure to check over and over again and took before photos to use as reference. The damage in the 2nd photo is too significant to be missed out during my inspection.

Yeah seems that if you’re in bad luck you might have your reholdered card back with edge wear.
I also experienced something similar: 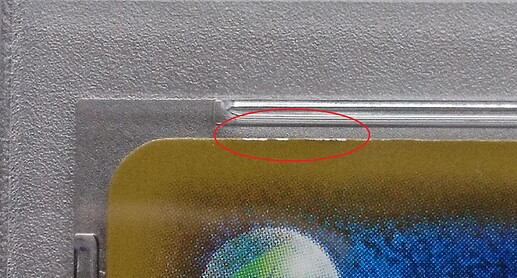 103SP_21920×1034 216 KB
Which I immediately filed a CRC and sent back for confirmation, and it’s currently being put on hold waiting for reviews.

However the above was not the worst I’d been through:

PSA4946×334 58 KB
Translation: PSA is sorry to inform you that we reviewed the card again after removing the particle, but then noticed that the card was damaged, which caused the grade to drop from 10 to 4.

PSA4_21920×818 180 KB
And yes, this damage was apparently due to accidentally clamping the card while closing the slab.

So yeah, things happen, just have to consider carefully whether you want to risk damages by going through the holdering process again.

Thanks for sharing! Its unfortunate that they damaged your cards too.

Definitely not gonna send any more cards for reholdering , unless it is absolutely necessary (big cracks down the slab, etc).
Even though the chances of damage are slim according to others, the risk is STILL there. That is enough to deter me from sending.