There have been a TON of leaks for Pokemon Scarlet and Violet lately, so I figured I would make a thread on it.

Here are some of the leaks that have been mentioned thus far:

Apparently, only two Pokemon will be getting regional variants in this game: Tauros and Wooper. I am beyond excited for Tauros and actually predicted it would get a regional form in Scarlet/Violet because the game takes place in Spain, so it makes perfect sense.

While there is no word (as far as I’m aware of) on Tauros’ typing, Wooper will be Poison. Now I’m not sure if it will be pure Poison or something like Water/Poison, but it will at least be part Poison.

There will be a bunch of new exciting evolutions in this game: Primeape, Wooper, Dunsparce, Girafarig (shoutout @kromaticlanturn) and Pawniard.

Primeape getting an evolution is AWESOME, and it will apparently be Fighting/Ghost. I also read that the way it evolves will be “interesting,” so curious to see how that works.

Wooper’s case is intriguing considering it also gets a regional form. Could this mean Quagsire doesn’t exist in this region? Maybe it’s like a Meowth/Perrserker thing?

Dunsparce’s evolution is obviously an answer to what fans have been pleading for for over a decade now. But don’t get too excited: the rumor is that it stays Normal type, so the Dragon-type Dunsparce that everyone has been hoping for will have to remain a dream.

Girafarig gets a much-needed evolution that is rumored to be pure Psychic. Interesting that it drops the Normal typing. This is apparently what it looks like.

Pawniard doesn’t get a regional form, so maybe this is like a Bellossom/Vileplume thing where there is another way to evolve it? Unlike Gloom, though, Pawniard evolves into Bisharp by level-up, so I’m not sure how we would get the other evolution. Remains to be seen.

If you were disappointed that there are evidently only two new regional variants, don’t be dismayed: new form types will be in Scarlet and Violet.

One of the new variants is called Paradox Pokemon, where there will apparently be ancient and future forms of existing Pokemon, but here is the catch: they will have different names, a different Pokedex number and they do not evolve.

The Pokemon that will have the forms are Jigglypuff, Amoonguss, Volcarona, Misdreavus, Delibird, Gallade and Hariyama. There are also rumors that Tyranitar and Salamence will have such forms, as well as two other Gen 2 Pokemon that remain unnamed in the leaks.

What’s weird is that these forms don’t evolve, but some of these are already fully evolved Pokemon. So I guess there is no Ralts, for example? Just Gallade? Strange.

There will ALSO be something called “Convergent Species,” where an existing Pokemon will have a counterpart that looks nearly identical save for a color change and a type change. However, they will be completely unrelated to the original Pokemon and will have their own name and Pokedex number. Hmm. Very odd.

The only such Convergent Species that has been leaked thus far is Diglett, which will evidently be a Water type. There will also be a Gen 1 Water type that will have such a form, but it remains unnamed in the leaks.

Apparently (I feel like I’ve said that word a million times), it will be something called “crystallization.” It will change the look of your Pokemon and will provide a stat boost for a specific type that you can choose. It basically gives it another STAB. It will look something like this.

Other Nuggets of Information

There are a lot more things to mention, but these seem like some of the key points. Check out Centro Leaks on Twitter to keep up with everything

Thank God, that crystallization tech sounds so much better than everything I imagined. Sad about the Megas in a way, not necessarily the mechanic but the forms themselves.

Dream scenario, things like Mega-Pinsir and Mega-Banette become actual evolutions instead, but that is never going to happen…

That’s the worst part about the disappearance of Megas. Pokemon who had Megas instead of evolutions will now just be relegated to irrelevancy. Especially Pinsir. An evolved form of that thing would be so destructive.

I really really hope this new mechanic does not make any of the same terrible mistakes that Dynamaxing did. Eliminating phazing, bypassing protection with OP signature moves on something with double HP for three turns was such a comically bad idea.

Unlike to happen though, even gamefreak realized they screwed up. Might be the first gen since XY with a decent meta!

There is no new Eeveelution.

Yep. The Dynamax gimmick was so bad that competitive formats didn’t even know whether to ban it or not. I actually believe Smogon briefly banned it and then unbanned it. Definitely the worst gimmick we have seen thus far.

I was going to tag you but didn’t want to break your heart. Lol.

two other Gen 2 Pokemon that remain unnamed in the leaks. 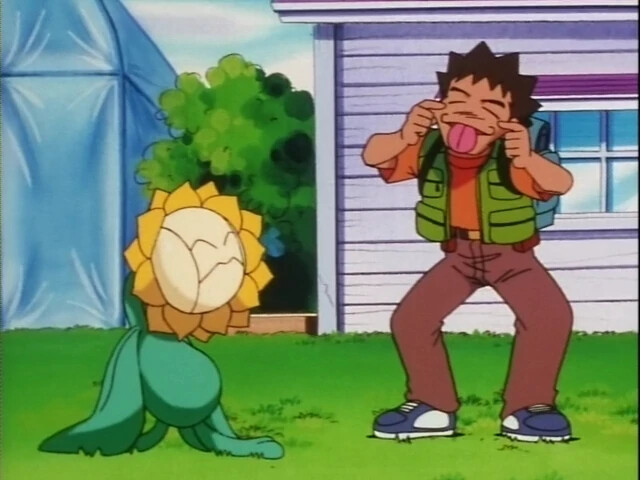 Wooper will be Poison

Oh wow, Quagsire was already such a good stall because it could learn toxic, with new typing it would mean guaranteed poison which is what held it back previously. Toxic + Stockpile + recover + scald is going to be OP.

Primeape getting an evolution is AWESOME, and it will apparently be Fighting/Ghost

Double wow, if this is true it will be going in my team. I usually run as many ghost types as I can, and this combo was usually just marshadow which was annoying to get until post game usually.

GIVE ME AN ANCIENT OR FUTURE MISDREAVUS!

I’m kind of bummed there will be no ghost type eeveelution which I was really hoping for.

As with all leaks I guess they have to be taken with a pinch of salt, so still optimistic. Most looking forward to this tittle than any other for a long time after arceus (which I thought was very very bare but had nice mechanics)

From the list I saw, I believe Misdreavus will be an ancient form, which leads me to believe it will be something REALLY creepy. Maybe it will be what it was before it became a Ghost? Interesting, to say the least.

The counterpart to the Primeape evolution in a sense, I love the idea!

So glad Primeape is getting an evolution, too. This thing has been basically unusable ever since Gen 1. Maybe it becomes sort of a budget Marshadow?

Yeah, or Scarfed U-turn spammer like the last 15 years just with a slither of viablity above UU.

It already has decent base 95 Speed, so you would THINK they would make it pretty fast (maybe something like base 110?). Or it could be one of those things where it gains stats in other areas and LOSES speed (Ghost types tend to be slow).

I just hope they improve its defensive stats so it at least doesn’t fall to the most ordinary moves. The thing is SO frail. At the very least, the Ghost typing will give it immunity to Normal-type moves.

No weakness to Sucker Punch, taunt, encore, U-turn, stealth rock resist, ( unlikely but maybe will o wisp now?) Could be some utility there.

This is so cool, thanks for sharing! Hoping to get a Steel type Tauros.

This is making me feel incredibly optimistic. I think artistically it’s going to be awesome too. Just what you mentioned will make it a viable addition hopefully. But yeah….speed. Please don’t do is dirty with this one. Base 110 would fine by me

SOME UPDATES (and a few things I forgot to mention earlier)

The region is called “Paldea,” and there will be 120-140 new Pokemon (including Paradox Forms and Convergent Species because they are technically completely different Pokemon) in this region. That makes Gen 9 the most expansive new Pokedex since Gen 5. Love it.

There is apparently NO BREEDING in this game. HOWEVER, there will be eggs. The mechanics will just apparently be very different from past games.

There are no day cares or nurseries.

Paldean Tauros does not evolve, BUT it has three different forms. Each form lives in a different area of the region. One form is a Fighting type; the other two forms are dual types, but there is currently no information on what types they are.

Also, interestingly enough, Kantonian Tauros is in this game. I’m not sure if that means you can find it in the wild or if it simply means you can import it, but nevertheless, it’s there.

I know this is standard for new gens, but at some point they surely have to go for less. I’d much rather see more regionals and forms than more and more new Pokémon. Just really don’t need that many, it numbs the excitement for me a little bit.

There is apparently NO BREEDING

How is getting competitive pokemon going to work, assuming they will move competitive from Sword Shield to SV.

Just saw that THIS was Primeape’s Pokedex entry in Pokemon Sun:

“It has been known to become so angry that it dies as a result. Its face looks peaceful in death, however.”

DOES THIS EXPLAIN THE NEW EVOLUTION?!?!