This may not be shocking to most of you. 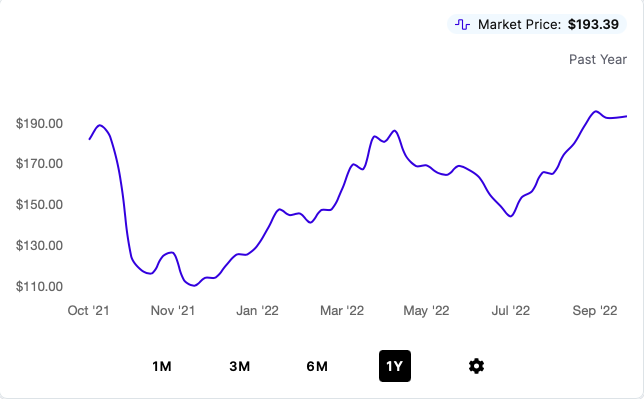 You can clearly see the dip in price around July 2022 from the restock wave. It looks like everyone has bought aggressively since.

My Thoughts: Evolving Skies is a “home-run” product. It is loved by almost everyone who collects English, and the Japanese equivalent (Eevee Heroes) is as incredible if not more so. That said, I suspect that a great deal of sealed product (e.g., booster boxes, ETBs, etc.) is hiding in closets and garages around the nation by modern “investors.” I would use caution when purchasing ultra-modern product at this price point.

Financial Disclosure. I do not hold a position in Evolving Skies or Eevee Heroes. My interest in posting about the set is not influenced by any financial attachment to the product.

With these investors hoarding modern product in their parents basement, I don’t see the price going up quickly long term. When the box hits certain milestones like $250 or $300, there are so many people that will want to and need to cash in, thus creating more avaialble supply, and demand is met at that price.

Very well said, @eeveeteam. These are my thoughts exactly.

I also wanted to note how many listings I’ve seen on “1/2 box” or “36 loose packs.” These are suspect to me, but continue to take up a considerable number of listings on eBay and TCGPlayer.

I see this and assume they opened boxes until they hit a chase card and then stopped.

Yep, this is what I assume too. 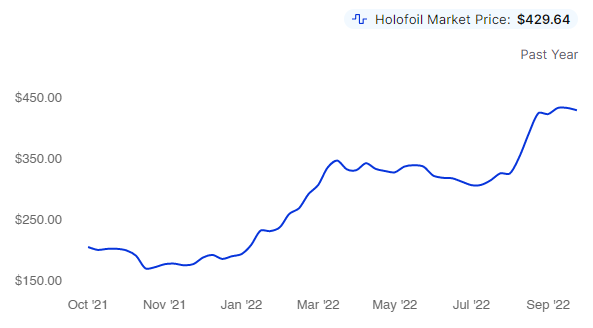 Meanwhile, any modern investooor could’ve just got the chase card from the set and made more money without any of the hassle of sealed product.

I honestly think the most interesting story in the next 5-10 years for Pokemon will be how the 2020 boom and the significant increase in squirreling away sealed product for future stonks affects the long-term prices of sealed product and cards from the SM era onwards. It’s not exactly unprecedented, but I will be very interested to see where an Evolving Skies box is in 5 years.

Modern is so incredibly hot right now that it’s hard to bet against it. But it also has all the elements of an unbalanced market with a ticking time-bomb of artificial demand–people don’t actually want to buy the product, they just want the money they believe the product will be worth in x years. Of course this doesn’t matter too much if there are enough people still coming in organically.

If anything was ever a 5/5 risk factor, modern sealed at above MSRP is it.

They way I see it, at least 50% of the modern investors who act like they will hold 10+ years will probably dump in 3-5 when they need/want money for a house or something similar. I see a lot of these people being in the early/mid 20s. Something like ES, is a ridiculously good set with a ton of demand and I could see it not just being an investment piece as demand will probably stay strong for it. All I know is I love the set and am happy to have a bunch of the chase alts I like in 10s in my collection.

I posted some charts I produced earlier in the year, which used data I had scraped from TCG Player.

For those boxes shown, if I now look at the past 65 weeks of pricing data and rebase them, then Evolving Skies comes in at 6th place, under: 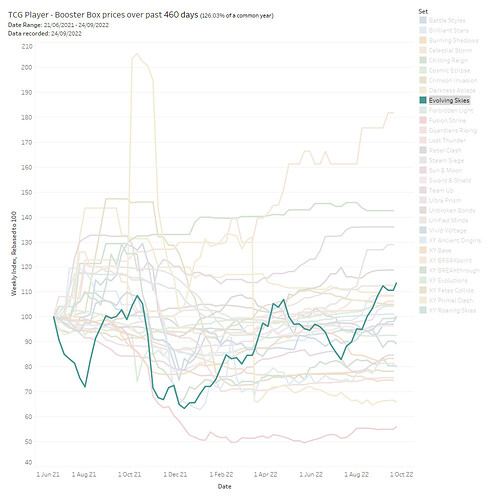 According to the data it was being presold for ~$175 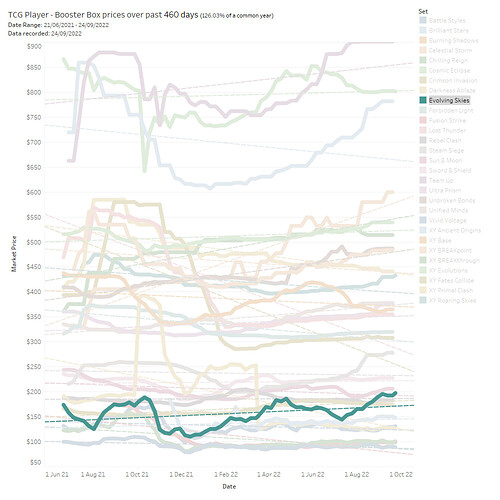 One of the issues for SM-SWSH boxes would be their low pull rates.

It makes more sense to open a WOTC-XY(?) set where you have a high chance of pulling the chase in a single booster box.

Kinda feels like the chase singles will do much better once the set is long out of print because the only point of these sealed era booster boxes would be to hold. I’m sure there’s like a 95%+ chance of you not pulling what you want whereas you had a huge chance of pulling a Base Charizard, Shining, Crystal etc. if you were to consider opening a sealed box.

I agree pull rates are crazy now, but people will always open boxes/packs.

Yeah, I have been saying this for a while. The potential value in modern is fairly high in some sets, but the probabilities of pulling anything of value is so low compared to a vintage booster. ES is probably one of the higher values when you consider how many great Art pulls it can have. But even as good as it is, it’s still a low rate overall.

The other problem is, the cards aren’t facing nearly the same attrition rate as vintage. So the pack/box value just isn’t comparable on so many levels when you start to do all the math and add things up.

The other thing with ES that bothers me is, the perception now is it’s the ‘best’ set of SWSH. But could this perception change in 5, 10, 15+ years down the road? Even if you look at the ‘bad’ sets in SWSH, they’re still pretty good I think with great art and other factors. I think ES is definitely very strong, but the other sets have some cool cards too and don’t get near as much attention at this time. If people really are hoarding or sitting on ES packs and boxes due to the herd mentality of it being the best, there’s going to be potentially a massive supply for a very long time compared to any other SWSH set in my view.

Anyway, I think ES is a great set and has a lot of great cards… I just wish you could actually count on pulling some of the better ones after a few boxes.

Pretty much my thoughts exactly. There is an absurd amount of supply out there matched with massive demand… for now. Depending on that massive demand to sustain when you know there are a million paper handed virus stonkers holding the boxes is the last thing I would want to rely on. Add some bonus points for the complications of transacting with sealed product now that scamming from both sellers and buyers has become so prevalent.

The PSA 10 pop for Umbreon VMax is already over 2000 and climbing daily. Compare that to a pre-covid modern chase card like Shining Legends Mewtwo currently at 731 despite having a 4 year head start. That set was far from short-printed, but is still just a drop in the bucket compared to the current printing and hoarding standards. I’d imagine a huge chunk of the sealed market at this point is just speculators selling to other speculators rather than people actually wanting to open the boxes.

I’d imagine a huge chunk of the sealed market at this point is just speculators selling to other speculators rather than people actually wanting to open the boxes.

Yep, I believe that this is common. Few individuals would crack a case of Evolving Skies to look for a single chase card that they could afford raw or graded for a fraction of the price. Anyone buying cases are clearly storing it away for speculation or special occasions (e.g., to open with children, friends, family in the future etc.).

Those lots of loose packs can also come from arbitrage. That is, people breaking down other specialty boxes and tins and selling the contents separately.

Sometimes it just makes more sense to break down tons of bulky products and sell the packs this way, because you can drastically reduce the shipping costs and move the product quicker.

Whenever I see loose pack lots I assume they came about that way. Evolving Skies in particular has been stuffed into various tins and such lately, so there are plenty of sources.

Great point. Reminds me of the hundreds of products with XY-era boosters that were broken down in 2019-2021.

Evolving Skies sits around ~$210-220 with shipping included. So after tax, the boxes will be $220-230 depending on where you live in the U.S. Absolutely wild. 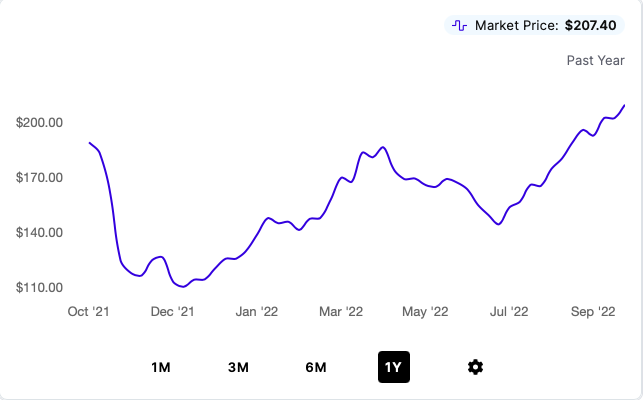 To sell or not to sell… the big question on the modern speculator’s mind.

The more this price goes up, the more baffling it is to me that people are actually still opening this product.

I bought and opened a case of 6 boxes when they were $90 each in December 2021. I didn’t get any alt arts from an entire case.

That was disappointing then, but would be even worse for anyone who experiences that at today’s prices. Honestly I probably wasn’t even that unlucky, considering the low pull rates.

I get the rush and the gamble, but this is one where the odds are seriously, seriously stacked against the opener. It is almost guaranteed to be not just a small loss, but a major one.

My brother and I each opened a case and got 2 alts each.

I dont follow this stuff much at all but didnt they reprint the set too? Or is that still coming