One day, back during covid restrictions, my sister dropped off a bunch of snacks to me as a thoughtful care package. One of the items was a box of Choki Choki hazelnut sticks (whatever they are called), which she purchased from the local asian grocer.

She chose them because they contained a pokemon promotional insert: the Pokemon Medallions, and thought they seemed cute. When I opened them I noticed the artwork seemed to be recyled from the TCG cards of various generations. But with everything else happening at the time, I sat them aside and forgot about them.

But this week I was on Shopee and came across them again in a listing.

I just quickly cobbled together a side by side comparison for one of the photos against their card counterparts, so you can see what I mean: 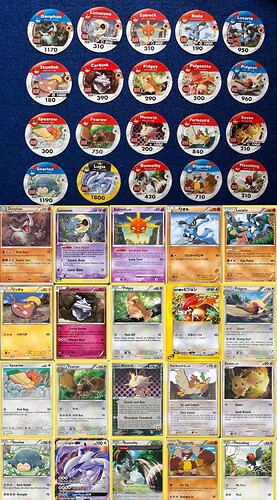 But yeah, I just thought it was interesting and worth sharing.

I think it makes sense to reuse artwork, even today, as I imagine it would be too expensive to require new art to be created at that scale for all new promos.

But what do you guys think? Do you think it’s cool to see the artwork being reused, does it add an extra lay of interest in the history of the TCG to see them pop up in other places? Does it bother you? or does it leave you indifferent?

I know use of the original stockart in the early days on various items, left many divided on whether they love or hate artwork being reused.

The medallions were also available in other products such as the Toonies snacks, so it was quite a wide reaching promotion.
Sưu tập thẻ Medallion cùng Toonies | Hàng hóa | The official Pokémon Website in Vietnam

As a side note, I never completed the set, nor intend to.