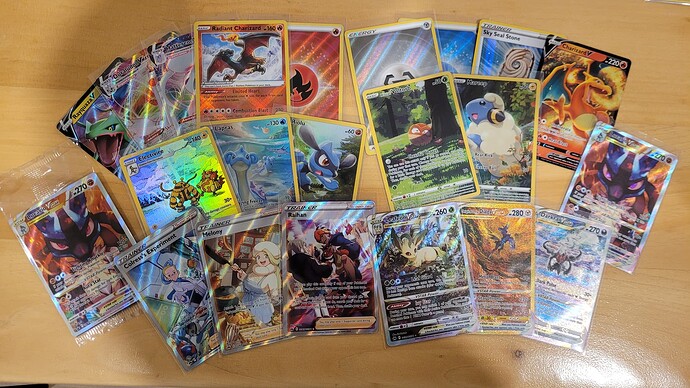 I think Crown Zenith does enough to enter my top 5 favourite sets! I’ll be going for a complete GG set and got a great start thanks to 2 fantastic ETBs

Pulls in Crown Zenith vary heavily per ETB, I like the Japanese way more with at least a guaranteed hit in each box. I did still enjoy opening Crown Zenith even though my pulls were pretty tragic. The good thing about CZ is that it’s basically half the price of VSTAR Universe, and with 2 ETBs you will generally pull more stuff than in 1 VSTAR Universe box

I think I’ll probably open one of the ETB’s and sell/trade two ETB’s. Local shop has VMAX Climax and I still need some CSR’s…

Just read 3 months worth of the entire thread and I’m going to pull the trigger on Vstar. Sure it’s double the price, but I think the yellow boarders on CZ killed it for me. Plus there’s just something about not being able to read Japanese that makes it aesthetically pleasing and exciting. Takes me back to being a kid in and seeing my first Japanese card and thinking:

“How the HECK did you get a Pokemon card all the way from Japan? We’re in 5th grade Brittany!”

Just updating sales information for anyone interested. Vstar Universe received another wave. I was allocated and didn’t get my full order. I sold about 100 boxes at $102 each in a couple days, which is currently the lowest price for a US seller. I don’t think the price & demand has slowed as much as what people expected. Perhaps another wave will help.

Also maybe its just me, but I think its safe to say Vstar is better than its English counterpart. Outside of the better looking grey borders, everything from the box, to pack, to cards leaves more of an impression.

Japanese texture alone is enough to buy it over english

about what % would you say this wave is in size compared to what you were allocated for the initial wave?

Thanks for info. When is the 2nd wave coming?

SWSH era high class sets really have spoiled us. Opened a couple of Remix Bout booster boxes today from storage, total of 60 packs. Absolute torture to open compared to Vstar. Pulls below, (minus a #79 fighting dojo card now in the grading pile). If it hadn’t been for the latter pull I’d have been absolutely gutted! 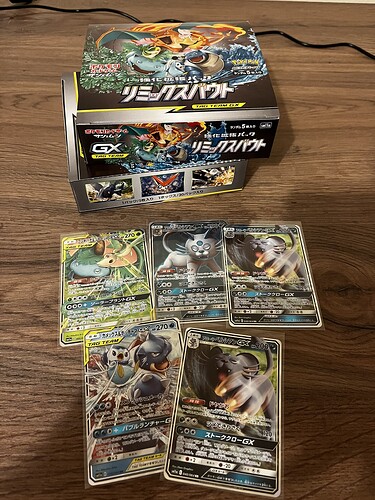 Opened some CZ I preordered months ago and VSTAR Uni absolutely ruined the experience for me. My VSTAR binder pages are almost complete but I won’t be collecting any CZ (any time soon at least)

Traded in all the hits toward a box of Scarlet ex, actually.

English really is a bummer to look at, from the packs to the cards themselves. Hopefully that changes in the SV era.

I can understand why Wotc and nintendo ex etc are more nostalgic and pricey than their Japanese counterparts, except for maybe the Neo Rev Shinings. It’s what a lot of us remember as kids. Plus english sets were good back then. Nowadays it’s kind of the opposite where I think Japanese sets not only look better and are better constructed, but I can see some sets holding their value better for the long term. I much prefer the Japanese eevee heroes alt arts compared with the English personally.

I was allocated more on this wave vs the initial.

Something else relevant to vstar universe, the wrap is bad. Here is one of many examples of people who are overly paranoid about reseals & weighing due to the drama detective videos. 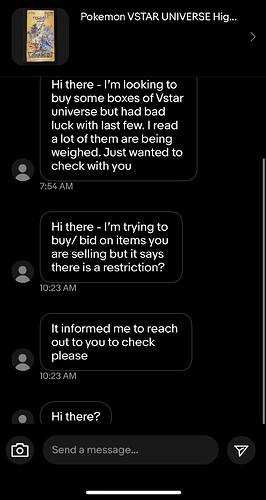 I have a video coming out opening vstar boxes with bad wrap. Hopefully it will help relax paranoid people like this person.

The fact that they can be weighed at all is certainly noteworthy, though. I also have to assume boxes with god packs are noticeably heavier as well?

People are paranoid (read: annoying) sure, but I’d rather know that you can weigh the boxes than not. If anything it makes buying from reputable sellers like you more important.

I feel for the slew of messages you likely get, though. A good rule of thumb is if you have to message sellers with investigatory questions, you probably should be looking elsewhere. It’s just a waste of time for both parties.

I agree. I think its fine to talk about any set that could be weighed. The videos that have been shared just need to be more grounded. The heavier boxes have the most expensive cards (gold cards). Also every vstar uniservse box is better than 90% of pokemon sets.

The biggest issue imo, most businesses aren’t weighing boxes to make an extra $20. I don’t doubt there is some bottom feeder 420blaziken who might try and do something that dumb, but any legitimate business isn’t weighing these boxes. Its more hobby drama than a real issue.

I didn’t really know where else to post this but 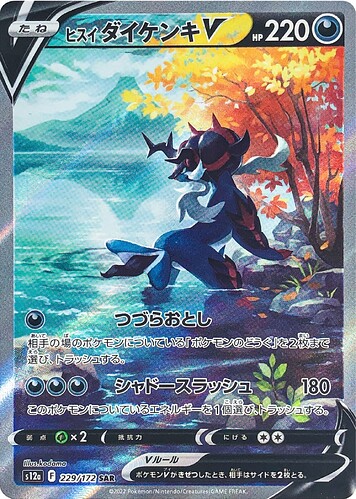