Hey, I was wondering how do you guys usually report fakes you find on cardmarket? I’m trying to come up with a “process” that isn’t easily avoided. So far this is what I have been doing:

Now one of three things can happen:

What are your guys experiences with handling fakes specifically on cardmarket? Or if you have your own “ways” from different marketplaces I’d love to hear them too.

Not trying to play some kind of vigilante, I just think it’s good for fakes to get called out in an efficient way.

Message the seller telling them it’s fake - if they don’t reply just open a ticket with CM support. They are pretty good with removing obvious fakes

Edit: CM support will still be able to see the image even if they remove it from the listing so there shouldn’t really be any need to screenshot it. can’t hurt though I guess

Yup, this works quite well unless they remove the picture after you message them.

Then the support doesn’t have much to go off, the downloaded picture of the fake doesn’t link it ot the seller (unless they watermarked it or something). That’s actually why I started taking pics of the card thumbnail with the sellers name.

This should be foolproof unless I’m missing something obvious.

Note: the screenshot below is just an example. NOT a fake card. 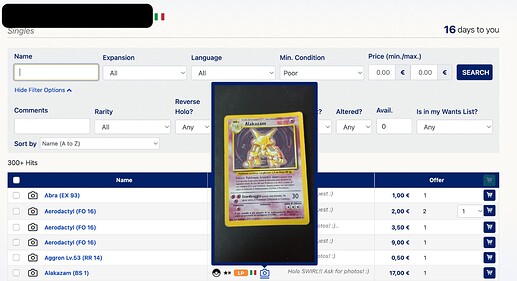 This is an Italian Alakazam from Base Set. What is fake about it?

That’s just an example of the thumbnail. I’ll add a note.

You should also blacken the country flag: This is disrespectful for Italians to my opinion. I am not Italian but I would honestly react sadly when seeing that. Once you blacken it, I will remove this comment.

Talking about fake, I just message a seller in the local market. He was selling fake evolution boosters. I message him, highlighting to him that this were fake and not really legal to sell and advise him to at the minimum mention that. As a result he removed the advert. It would have been a pity to see buyer purchasing them ($5 per booster).

I don’t think I have encountered a fake before on CM (I only buy vintage) but the fight against fakes will always be important especially for the more expensive cards. I haven’t thought of what I should do when I do encounter one but now I know so thanks for posting this.

Ofcourse not everyone is good at spotting fakes and even sellers might not know it themselves even though this should be basic knowledge. I do wonder if there are people who abuse this and harras people with it because I’m sure these things can happen.

Can’t speak to cardmarket but a lot of times people don’t even know that what they’re selling is fake. If you message them telling them it’s fake they’ll usually take it down because they weren’t aware it was fake in the first place. Talking exclusively from ebay experience

You should also blacken the country flag: This is disrespectful for Italians to my opinion. I am not Italian but I would honestly react sadly when seeing that. Once you blacken it, I will remove this comment.

You’re out of your mind.

As an Italian I totally agree.

About cards, personally I never seen an italian pokémon fake tbh.
It happened with some yu-gi-oh pretty bad translated… I remember spotting them as a kid, but pokemon… never seen.
Or my sight is getting worse or we’re good at making fakes?

You entry is about a fake card, then you show a card that is not fake ( from your entry: Note: the screenshot below is just an example. NOT a fake card.). I am a bit puzzled especially when you have taken a screenshot from a legitimate user and most likely you have not even asked for an authorization.

If I understand, you have been scammed in cardmarket, and you are asking how to deal with that?
Cardmarket is a very secure platform from a buyer standpoint, where buyer’s funds are kept until he confirmed that the product has been received and matched what he bought.

Otherwise a case can be opened and the fund will be returned if the seller proof that he has not received the item (that’s easy to proove, usually packaged are tracked and a signature is needed) or if there is a product mismatch, then you just show the image of the item and as one suggested earlier cardmarket has access to all images including the initial should the buyer change in between.

Could you please put the card in question where you suspect scam, and also do not put any identity until one is found guilty.

It’s made clear that the screenshot provided by @danbagrov is just an example of how to capture the user interface and not calling out this seller (or all Italians) in general.

Please keep the thread on topic

I’m Italian, and I can tell you that the game was translated since Base Set, every card in the game that you could find in an English booster pack can be found in Italian too.
Second to this, why would a criminal try to print fakes in Italian? The English market is so huge compared to all the other European languages that it wouldn’t make any sense.

Not that it matters, but there are several sets not printed in Italian…

To pfm’s point though, it’s all off topic. Fakes float around in every country of the world. OP’s guide to reporting fakes on cardmarket is a good one, and like most have said above, a majority of sellers aren’t listing them with ill intent. First and foremost I would screenshot any photos they have listed just in case and then reach out to the seller directly.

No no I was saying Italian people are fake. But it was just a joke lol

Second to this, why would a criminal try to print fakes in Italian? The English market is so huge compared to all the other European languages that it wouldn’t make any sense.

This is the answer to every question.

To pfm’s point though, it’s all off topic. Fakes float around in every country of the world.

Yeah, but in english. At least as far as I know.
I’m collecting full sets in italian, it MUST be like that