Hello errbody.
Who here is chasing goals of completing a set or multiple sets on the psa set registry, and how are you doing?

Screenshot_20221122-212612_Set Registry1080×524 40.5 KB
I’m number 1 by one card over the legend that is @fourthstartcg . It is a fierce and engaging battle but ultimately the goal for me is to complete the set. I think fourth takes this set more casually but its nice to have someone to compete against.

I haven’t figured out how to share a link to a set yet, but if I can I will and I’d like to see your sets too. Please share.

Just working on 7s and up for the ENG/JPN set. Few bad grades that I’ll replace eventually. Have around 40 cards waiting for $10 bulk that will hopefully get me close to completion. PSA is missing 11 cards that I submitted to add to the set.

Sorry a very noob question, why are some of the grade above 10? I am assuming that grade number indicates an average grade correct?

You get bonuses if you have the highest grade or the only one graded.

I just use it as a checklist so I’m not buying the same card multiple times. All that ranking points stuff i just ignore

I’m currently #2 for the Greninja Master Set, but once my current PSA sub gets back to be I should jump to first place. I am also unintentionally now #2 for the Zoroark Registry simply due to the Greninja/Zoroark Tag Team cards I have.

I use the set registry mainly as a way to navigate to certain sets/cards to be able to appreciate them on the go. It’s exceptionally rewarding to see at a glance your cards, especially if you’ve uploaded images. It’s much more efficient than scrolling through a messy photo album of scans on a phone with little order.

I am also unintentionally #1 for the Zoroark Registry 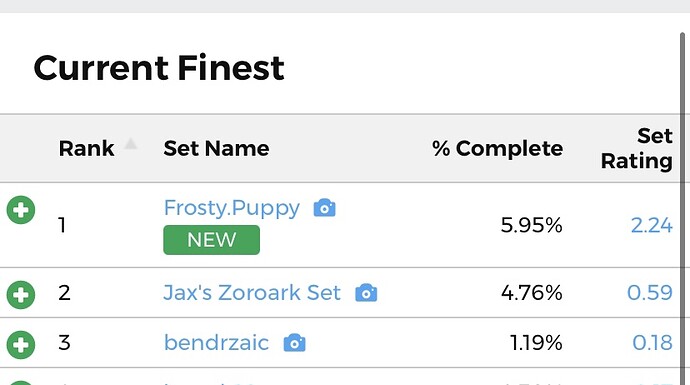 All hail the new King!

Not to flex too much but I’m rank #1 for Oddish on CGC’s Registry, and #1 for Eevee as well. I’m the only person with an Oddish set in the registry but don’t worry about that

And I only have 3 Eevee cards

These are going to take a while. I mean hell I can’t even figure out what some of these cards are. You know when you google a card and it doesn’t even show up you’re probably going to have a tough time finding one

I have a decent chunk of the actual TCG cards but some of these other random cards are going to be pretty tough. “Slow and steady” as @gemmintpokemon told me in Denver

It’s actually 97% or something now if counting in another order which is pending shipping and even more if counting in the 9s, but personally I don’t update this list until I got a 10 and checked the returned card to make sure PSA didn’t screw up so it stays at 87% for now.

But on the other hand, this list wasn’t complete as S-Ps are still being released until early 2023, so I’ll keep working on this until I get all 10s on numbered S-Ps (and perhaps the Poké-lun jumbo to all-10 the PSA list). The goal’s almost there so not gonna give up now!

Yes, you are in big trouble! Most Eevee fans I know are binder collectors. It’s expensive the way it is, so why spend so much on plastic that gets cracked and fills the landfill?

You know im messing i just couldnt resist being naughty and waiting to get caught.

I’ve found that set registries are very underused in general

I wish they were used more often so the competition was more fierce!