Does anyone have any info on these prototype theme decks? I can’t find info anywhere. 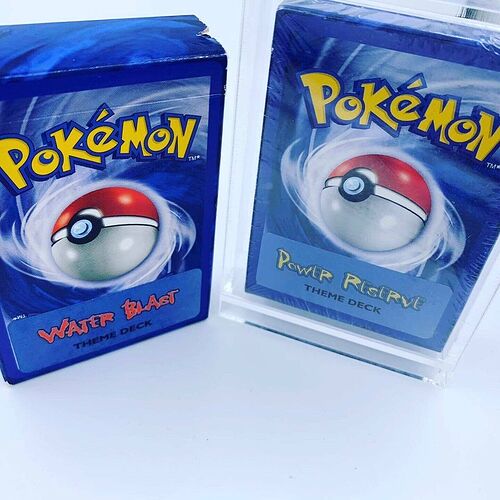 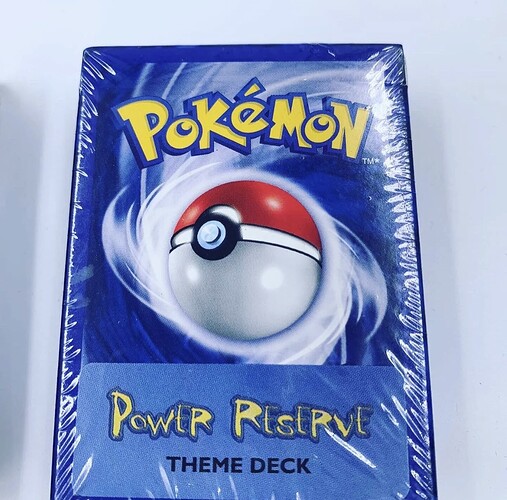 We have the honour to be able to present the only known decks for the jungle deck which followed base. These were never meant to ever leave the building and was thought to have been a demonstration to a small selection of elite white coats only so that they can make sure the concept worked.

One deck power reserve is fully sealed and the water blast box is open but the contents still sealed.

It is possible that these cards contain errors or differences to the released jungle set but due to them being sealed we have not been able to verify however the opened box demonstrates that the back of the cards appear to be the same as the jungle cards in the deck but of course we can’t see much other than the back of the back card and the front of the front card. There may well be differences but we can not verify this without opening and do not wish to undertake this ourselves as we appreciate it for what it is.”

I am certain I have seen these before, but the explanation escapes me. Hopefully someone else remembers more clearly.

Remind me of This and This discussing if it’s fake or comes with some sort of gift sets, personally I didn’t dig it, can’t help right now, sorry

Just read all this. Interesting mystery. I messaged the eBay seller to see where he got his info. It reminds me of the trainer A & B decks a little.

Not necessarily a ton of extra info, but here’s a Reddit thread from 9 months ago mentioning the same Power Reserve deck in your picture: https://www.reddit.com/r/PokeInvesting/comments/tpuj5j/opinion_on_this_power_reserve_demo_deck_is_this/

At a minimum it perhaps helps quell any worry about it being a fake. I’m not personally familiar with these though so I’d love to learn more as well! Is the seller able to send any more pictures of the other sides of the box?

Thanks for the heads up @Will

I have both Water blast and Power reserve in my deck collection. From what Ive gathered, nobody knows where these came from. There was that ebay account that has a lot of claims in it but when i looked into it about a year ago there was a second story that had some slightly different details, essentially said that these were demonstration decks for an event/convention.

The packaging is the normal international interior deck box that comes with all uk and non-english decks. The only difference is these have a sticker on them as a label. All stickers printed the same way, standardized quality. The plastic wrapping also seems to be similar for all sealed versions.

The cards included are standard unlimited jungle versions. They are not 1st edition and had no other unique differences on the cards.

Overall, it is very doubtful that it is some sort of repackage and definitely not a part of a box collection. I have no idea if it is a demonstration deck of some sort or if it was just internal packaging that had leaked out. Oddity to it is that they are externally and internally sealed but I would guess its from grabbing sealed decks during production to put into these. There is at minimum 3 power reserves and 2 water blast decks out there in the exact same packaging including my set, so it isnt just a one-off. I do personally count them similar to demo decks together with the trainer decks as non-retail available decks.

Sorry I cant help further but hopefully someone can provide more details.

That is the same as one of those linked above by @omic , after some back and forth with them it is also the Power Reserve version in my collection.

Fascinating. Thanks for all this info. I ask because I found this sealed Water Blast one recently off a seller that said he got it many many years ago along with a bunch of Jungle, base set and fossil cards and a 2 player deck. 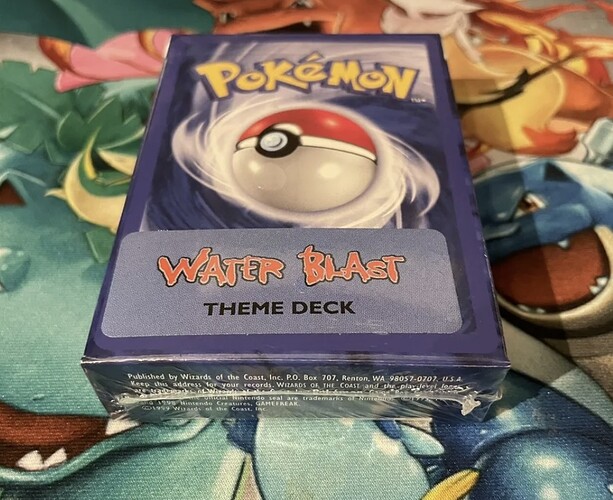 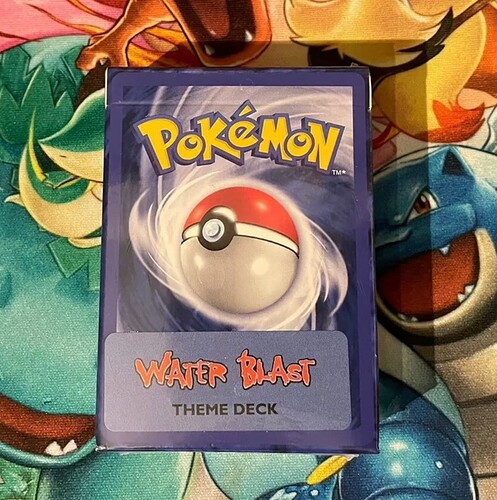 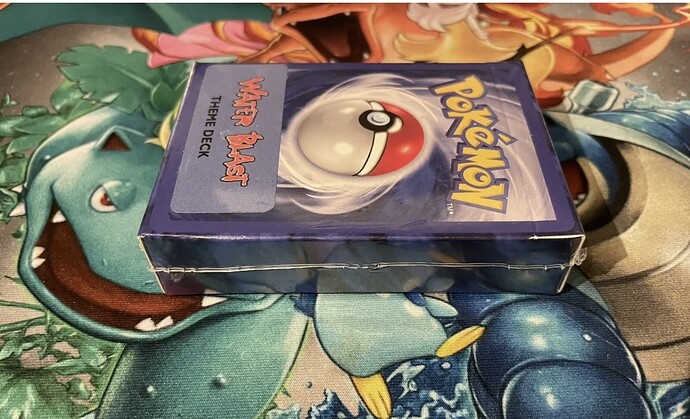 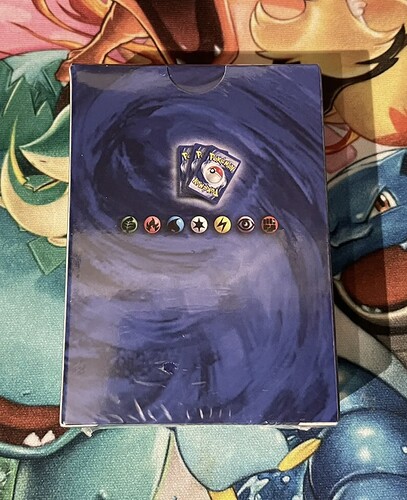 Oddity to it is that they are externally and internally sealed

What does that mean?

Awesome that its sealed! Too many of the ebay sellers have them listed really high because of that ebay listing. Especially with unlimited jungle cards being whats in them.

Both the box is sealed and the deck of cards inside the box is also wrapped and sealed.

I only saw the 60k listing with the sealed power reserve and opened water blast. The water blast sealed one I got was listed for 12k. I got it for 3k.
Have you seen others recently?

I wish someone would be able to authenticate or offer more info from a WOTC employee. I wonder if an auction house would look into them if you wanted to consign. @TCAGaming @smpratte any more info on this?

There had been one set for 25k but unsealed. The 60k one has been up at least 2 years. I picked up my water blast copy in a collection sale from someone liquidating items of a deceased family member and they wouldnt say what they did for work. No one has been able to say where they came from yet but they arent very known so not much info has been compiled. Again, i find them similar to the base retail demo kit, very little info but a cool piece for a collection.

I can say that the cards are authentic and the box is authentic. Beyond that, it takes more details into the wotc process than I have.

Thanks for all this info! So you unsealed the inner deck and went through the cards then? Are they the same as the official theme deck release?

@Leo My water blast deck was already completely unsealed. The power reserve deck which is seen in the reddit post and the other linked post still has the cards sealed but the outer box seal is gone. After checking through all the water blast cards, they were all exactly the same as normal unlimited cards. I was hesitant to claim they were original until after i saw the internally sealed power reserve deck, which the kangaskhan holo can be seen and is exactly the same as a normal unlimited kangaskhan holo. I now feel more confident saying that it is likely my water blast deck is original with all cards being the same as a normal deck. No special markings anywhere front or back that I have been able to see.

Very cool. The demo kit (also seen in Italian referred to as a press kit) is similar I see what you mean.

As far as collecting value, it feels similar to demo packs in that once opened the cards inside are just typical shadowless cards. The collector value is keeping it sealed. Not that it’s not very cool to have the box anyway!

Pretty much. The history is worth more than the contents but unfortunately this decks history is currently vague so any importance is also vague. The press kit (demo kit is indeed incorrect as Ive pieced together it may have been presented as part of a press release style event advertising going international, beyond US and Japan, for retailers to see what products were and included 3 base pack and a 2player starter kit in the language of the overall box. There have been french, italian, german, and english seen. Also interestingly enough, nonenglish languages received 1st edition packs in the language of the kit while the UK kit received standard unlimited packs and not even 1999-2000 cards.) I mentioned also has some known history but is also not very detailed so it also has only as much value as its history and the literal contents included, technically about $1500 in contents and whatever the history is worth depending on condition of it (Ebay says maybe 9k for a sealed english copy). I may have gotten sidetracked from the topic but i do enjoy my corner of collecting.

Anyways, jealous about your sealed deck. Hopefully we eventually hear from someone who has more details about production, distribution, or anything else to do with them. I will forever be bummed they werent designated as trainer deck C and D.