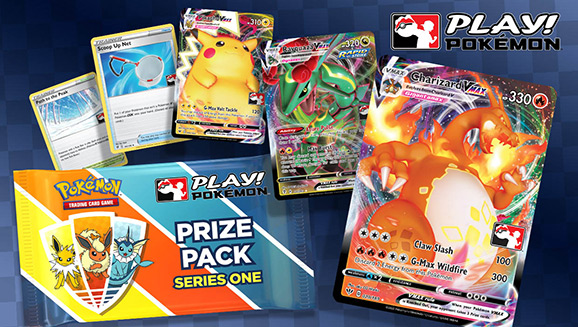 Receive exclusive Prize Packs when you participate in your local Pokémon League. 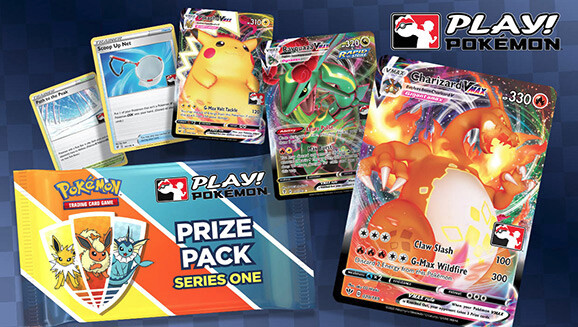 This is pretty neat. Wish they wouldn’t have reused the same arts for some of the cards (I guess they could still change them?), but at least they will be stamped. Will be interesting to see how the pulls will be!

I don’t mind them reusing the old arts since that’s what they’ve pretty much been forever just with a special holo. I just hope that with a set of 200 they print enough that they’re not stupid expensive to get or hard to find. Either way, gotta wait to see what the set list is.

Aside from the ones pictured above, we’ve seen these Vs and most of their VMAXs so far from about 30-40 packs at my League. There’s probably a bunch more:

On average it seems a V/MAX is pulled every 5 packs or so. Will be tough to get the more popular ones for species collectors.

Also saw a VIV Charizard reprint, it could have a holo version also, not seen it yet. In total there are probably over 300+ unique variants in this set (including non-holo and holo Energy cards), featuring reprints of cards from SWSH Base Set to Evolving Skies.

A new Series will release in February, then another six months after that. Expecting Fusion Strike to at least Astral Radiance next. 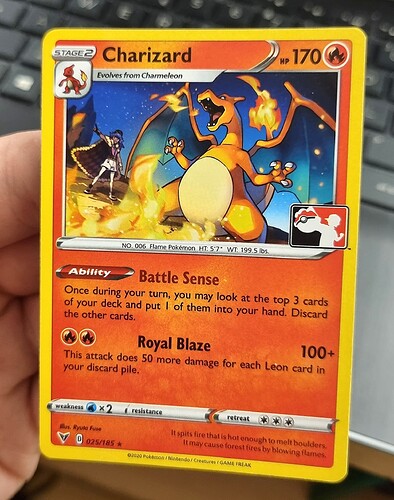 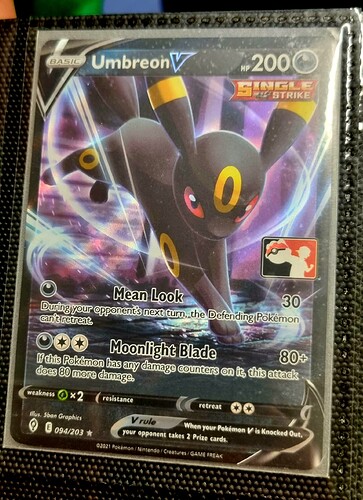 Thanks for this! Unless Pokémon posts an actual set list, it will be on someone (bulba?) to keep track of pulls from other people and make their own list.
Definitely will be tough for species collectors, especially me, @ragingkraken and @launcestoneeveeman

My first reaction was “I wish they’d make these cards special, like PLAY promos or something” then I realised how much they’d cost and that thought evaporated

I have yet to see a set list somewhere. I’m sure one will pop up soon now that people are getting their hands on them.

We could make a set list on this thread I guess. I know at least Leafeon VMAX is confirmed. So I’m guessing it’ll be most if not all the Eeveelution V/VMAX in there. I wonder if there’ll be a lot of overlap with the Start Deck 100

We could make a set list on this thread I guess. I know at least Leafeon VMAX is confirmed. So I’m guessing it’ll be most if not all the Eeveelution V/VMAX in there. I wonder if there’ll be a lot of overlap with the Start Deck 100

this sounds like evolving skies v2.0 for collecting. i am not looking forward to it to say the least

And of course the series with a ton of Eevees is the shortest distribution time (4 months) when series 2, 3, and 4 will be 6 months

If it’s anything like what the current images show, it’ll be just the normal V/VMAX so there will be a decent amount, but shouldn’t be expensive really. Not the best cards in competitive either.

but theyre eevees, so they will naturally go for a stupid amount of money, eg non holo umbreon v

To be fair, there were like 10 ebay sales of the Umbreon V non holo, and I know the buyers for 3 of those. We could have coluded and drove the price down, lol!

These stamp cards will hopefully be niche where it is just species collectors like us that want them. We will see

Unfortunately no photos of most of these, but the information comes from reputable sources.

Would anyone be interested in a spreadsheet/list of the non V/VMAX cards? I’ve seen holo Snorlax, non-holo Charizard and a bunch of others that might be of interest.

I’d be interested. I doubt I’ll go for anything, but considering no one really has a set list posted, it’ll be helpful to someone.

I’d love to see what’s in the full set. Got a few Pokémon I’m interested in seeing if they made it in 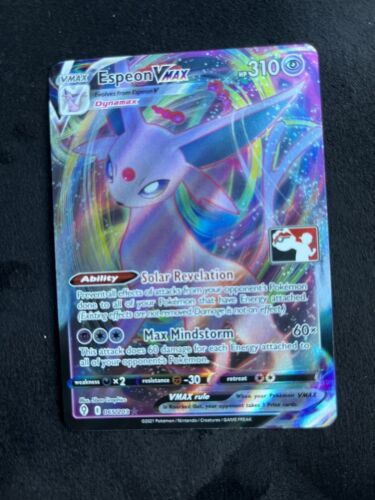 Id live to see a list as I’m a snorlax collector and have every one so far so this set going to be a mission if I have multiply to chase down.

List has been updated again, more recent surprises include Alcremie V which is the only card so far from a subset/holiday set.

I’ve had a decent amount of interest so I will compile the list of regular Pokemon and Trainer cards (including holo variants) before Christmas and make a separate post.

I just pray that Greninja V or Radiant Greninja aren’t included in Series 2 when that comes out!