I copy/pasted this from my site pokeguardian to save time, I hope you enjoy this one! Stunning discovery today by PokéWiki DE!

GrollenKette951 showed this to me today and I did not recognize this card, and was told afterwards that the existence of this wasn’t known until today. Wow!

This BW Promo card, that was originally meant for the 2011 World Championships qualifier prize (according to Bulbapedia), is one of the few cards that never got to release due to the 2011 Tōhoku earthquake in Japan.

GrollenKette951 was searching for this card today in the Japanese Pokemon-Card.com database and found it. Up until this day, nobody outside of Pokémon knew what this card looked like and what kind of card it was. It was really a ‘Lost Card’ for over 9 years.

The other never released BW promo’s (025/BW-P to 031/BW-P) that were meant for this tournament were already known before, only 027/BW-P was missing for many years and was never revealed.

Unknown if any real life copies exist or not, physical cards of these lost BW promo’s will likely never surface, they could have been destroyed. Time will tell.

Here it is in all its glory.

Thank you very much GrollenKette951 for informing us of this discovery!

Thanks for sharing the discovery of course but hot damn this probably would be the singular worst prize/trophy card of its caliber. I can’t think of a single worse example of a card with a similar release. I would rather have the secret rare catcher from Dark Explorers than this lol.

Wow what a piece of shit to follow up some truly epic, unique, and beautiful prize cards. Of course it’d be a 5ban card.

This might be the most let down I’ve ever been by anything in the last 12 years of collecting.

The follow up to Wonder Platinum and Masters Key was a Catcher reprint that didn’t even have new art?

9 years of wondering what exclusive incredible art we missed out on with the cancellation, and now this?

I mean, I’m happy that we now know what it is, but good lord.

Unlikely that this was the trophy for the event so can‘t be compared to the platinum or key. I‘m sure the trophy would have been pretty amazing art

Pokémon Blackpill and Whitepill. Then again after HeartGold SoulSilver renaissance sadly generation after wasn’t quite the romantic one. The truth is out there… er, no disrespect meant for 5ban, around this era they had some winners but it’s playing almost like a curse for what happened in retaliation to Keji Kinebuchi and Kimiya Masago.

The feeling of seeing this lost promo after reading what you wrote was very anticlimactic.

Never thought we’d get to see it, but glad to see it finally got discovered.
Surely all the copies got destroyed.

Not a fan of any card they have ever produced. Gimme a dbz ccg saiyan saga blurry non holo common over any of their cards, any day!

Unlikely that this was the trophy for the event so can‘t be compared to the platinum or key. I‘m sure the trophy would have been pretty amazing art

We already knew the participation promos (Emolga and Druddigon) and the side event promos (stamped energy), what else would this be?

The trophy cards were most likely planned to be unnumbered promos

. The 2011 Victory Cup trophies were unnumbered too.

The trophy cards were most likely planned to be unnumbered promos

. The 2011 Victory Cup trophies were unnumbered too.

So if not the trophy card, what do you believe this Catcher to be?

Could be any additional promo given out for many different reasons. They always have several participation promos at those tournaments. Not even a blind person would believe this to be the trophy of the tournament… (no front though)

Interesting that it took more than 3 weeks before I found this thread. Especially because english is not my mother language, here is a copy/past of my comment, which I left under DJGigabytes video.

Hi, I am GrollenKette951, the person who found this lost card. (If you imagine that this mystery started nine years ago when I was seven.)
It’s nice to see that my efforts to find this card are so appreciated. Here I posted all of the undistributed cards: https://twitter.com/GrollenKette951/status/1269168384673013760

For everyone who is interested in how exactly I found the card or who didn’t find the explanation in the video enough, here is a more detailed version with approximate duration of each step.
So where do we start best?
I started the search on June 3rd (Search time: Around 30 minutes):
The first thing I knew was that Zoroark (www.pokemon-card.com/assets/images/card_images/large/BWP/027277_P_ZOROAKU.jpg) was the last BW-P promo before the lost cards. Note: The Japanese card database uses the abbreviations P for Pokémon, T for trainers and E for energy cards. The name used for all Emolga cards is EMONGA. From there I simply tried out all the numbers and then came across the unreleased Emolga card.
The next number had to be Druddigon. And that was it.
June 4th (Search time: Around 2-3 Hours): Knowing what numbers the energies had, I was able to narrow down the search to BWP/027328, so I started trying out every Gen 5 Pokémon and a few classics like Pikachu, Mewtwo etc. At that point I was already afraid that the card could be a completely unknown trainer card and went to sleep. (Solving this problem with a program is possible but takes much too long (30 Letters á 26 Options)
June 5 (Search time: Around 30 Minutes): After sleeping and finding some other scans for PokéWiki, the search continued. I started trying out all the trainer cards in their release order since the first Japanese black and white set. At 7:36 am CEST I found the card and posted it with a “YES, YES, YES, YES, YES, YES, YES :party:” on the PokéWiki Discordserver in a semi-public channel. Reddit (r/pkmntcg), Bulbapedia (and the Encyclopaediae Pokémonis community) and PokeGuardian received the information next.

A little update to this comment: Thanks to somebody else from PokéWiki I now have a programm that automates the whole Emolga step (as long as I know the card name, the set and and an approximate search area for the internal numbers). And togehther we came to the conclusion that automating the second step would be very inefficient.

If somebody has some good ideas to what an potential prize card could have been, I might search under that name in the card data base.

Here’s an exciting update!
It was posted by an old Japanese player/collector earlier today. First time we’ve seen a “real life pic” of the card.

This guy recently appeared on twitter and has a truly outstanding collection.
Hopefully someone manages to reach out to him and get som more background on how he got hold of the card. 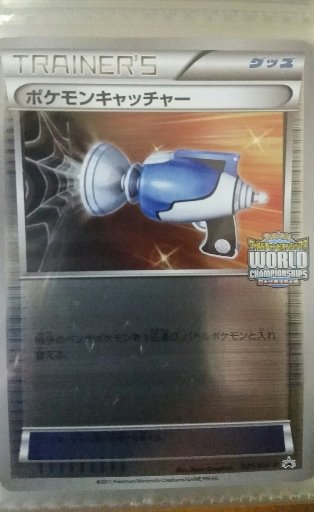 What in the world.

Just asked my Japanese friend, and his friend asked TPC if there was any way that this card was distributed in the past.

TPC said that they have never distributed this card to anyone. So this card might be obtained unofficially. It would be indeed interesting to know how this person obtained that card, and we may never know

I am curious if the other promos from that event are saved too. 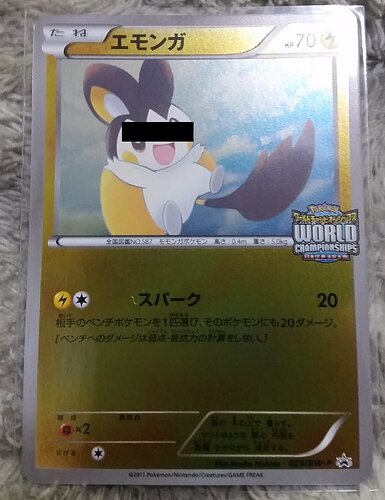 I’m confused as to what the black bar is on it. Is it printed on the card?