As many of you, during these hard times, I find myself at home with a lot of free time, and in those empty hours I tend to go to my collection for comfort and joy.

Today I was going through the Japanese Trainers Magazines in my collection and I found what could be proof that the Pikachu 1st Edition Jungle Black Star Promo was not an error, but intentional…at least to a certain extent. You see, one of the interesting things with these old Japanese magazines is that on top of the Japanese Pokémon Scene news and guides, they would also share information of the upcoming Pokémon releases in the West.

Being that so, on Trainer Magazine Volume 2, on the last pages we found information about the release of Jungle 1st Edition packs in English. This caught my eye, first because it was one of the few colored pages and then because the displayed boosters read “11 Tradable Game Cards”, mimicking 1st Ed. / Shadowless Base Packs. Then, when taking a closer look, a small black text, overlaid on the Pokéball, can read:

"Capture the rare Pikachu card! Look on inside Wrapper."

What could this mean? There is no rare Pikachu card on the Jungle Set, the Pikachu was and is a common, both in English and Japanese. So why mention that there is a rare Pikachu Card inside?

Could it be that the Pikachu 1st Ed Jungle Black Star Promo card, which we consider as an error, had an intended release, at least in the early stages of the printing process? Maybe WOTC did release it willingly but then never publicly acknowledge it’s existence or the possibility to pull it from a booster?

Could it be that the Pikachu 1st Ed Jungle Black Star promo is the true first Secret Rare card released in an English Set?

In light of this information, what do you all think? I thought it can be pretty exciting information!

Please see the images of the magazine below:

P.S - For some reason I cannot make the normal way to display the images directly in the post to work. If any of the Mods can, please display it

Heres a scan of said page 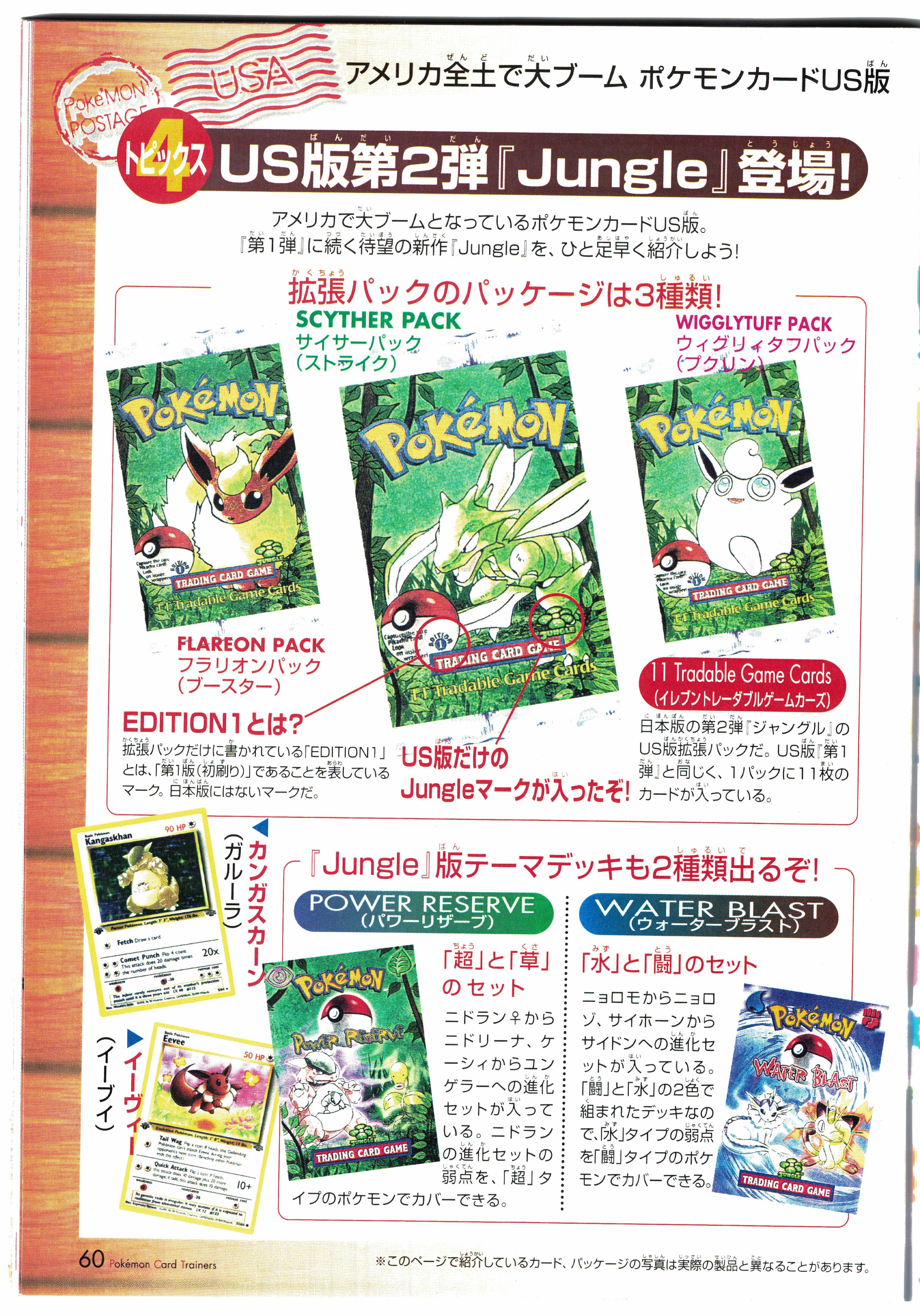 Unfortunately I don’t have them all. I checked 4 & 5 & 7 and didn’t find anything else

Unfortunately I don’t have them all. I checked 4 & 5 & 7 and didn’t find anything else

Ill have a look through mine

This is an insane find. If this is true, it’s the very first “secret rare” as you said!
And if so, it stayed “secret” and mistaken as an error for 2 decades!
Props to you for paying attention to these so small details!

Someone get Chel on the line!!!

Nah I couldn’t find anything else about 1st ed jungle packs, only unlimited jungle and the pack photo was normal.

I mean japan sold a lot of english product, the vast majority being theme decks.
On top of that I would say 80% of the base theme decks coming from japan are of the shadowless variant, they got a lot in.

@styluspt, I love this type of stuff! Even if it ends up being false, its a cool discovery. Those trainer magazines were full of information!

This is super cool! I had to do a quick refresh on the details of the Ivy Pikachu Error. Given this info it seems pretty possible that the Ivy Pikachu “Error” Promo was included in packs as a chase/secret rare. On bulbapedia it says (posted below) that the believed pull rates for the “error” card is 1 out of every 10 Jungle booster boxes… I mean, that would be a pretty good standard pull rate for a secret rare back in the day maybe?

Seems possible the origin of these cards is (like you said @styluspt ,) English Jungle booster boxes distributed in Japan with this 1/10 pull rate for the rare “Capture the rare Pikachu card! Look on inside Wrapper.”
Look on inside the wrapper seems like a weird translation and proof that it would be intentionally inserted into the booster packs. If this wasn’t a known promo in the US then makes sense for the boxes that were eventually discovered to include the error Ivy Pikachu to have come from Japan.

Could someone clarify what today is considered the “error” with this card for me?
Also from bulbapedia: a small number of English version cards with 1st edition symbol were accidentally released alongside 1st edition release of Jungle booster packs? Why would a 1st edition stamp be an “error” if its a first edition set release? Are promos not suppose to have 1st edition stamps?

Some supplements for others:

bulbapedia: The card was first released in English through the first Pokémon card leagues in July 1999. The version of the card released in English is commonly known as Ivy Pikachu, referring to the background design of the illustration. A small number of the English version of this card with a 1st Edition symbol were accidentally released along with the 1st Edition release of Jungle booster packs. This accident caused this card to be the only promotional card of any sort to have a 1st Edition release.

Wizards Promo errors:
Pikachu: Due to a mistake by Wizards, a few Ivy Pikachu promo cards were printed with a 1st edition stamp. This is the rarest unique card in the 1st edition series; it is said to be found in only 1 of 10 Jungle booster boxes.

flipside gaming 2017: The Ivy Pikachu Error was mistakenly included in a very small number of 1st edition Jungle booster packs. The total number of these error cards are unknown, but they are universally acknowledged to be the rarest, and most expensive, cards in the Jungle expansion. Interestingly, the Promo set symbol, and not the Jungle set symbol, appears on this card. As with the no symbol Jungle holo error cards, this has been a source of confusion for new collectors. The bottom line is that if your Ivy Pikachu has a first edition symbol, someone pulled it from a 1st edition Jungle booster pack.

Damn that’s interesting nice find! Since the magazine was published in 2001? It might just be advertising that there were Pikachu’s accidently added to the packs? If the Vol 2 mag was published prior to the English Jungle release you would have a dead ringer for it being intentional.

Damn that’s interesting nice find! Since the magazine was published in 2001? It might just be advertising that there were Pikachu’s accidently added to the packs? If the Vol 2 mag was published prior to the English Jungle release you would have a dead ringer for it being intentional.

Edit: Whats weird then is that if this magazine was printed after the English set release. Why do the booster pack images show the wrong art format (ie. the “11 Tradeable Game Cards”.)
What were these companies doing back then?! lol 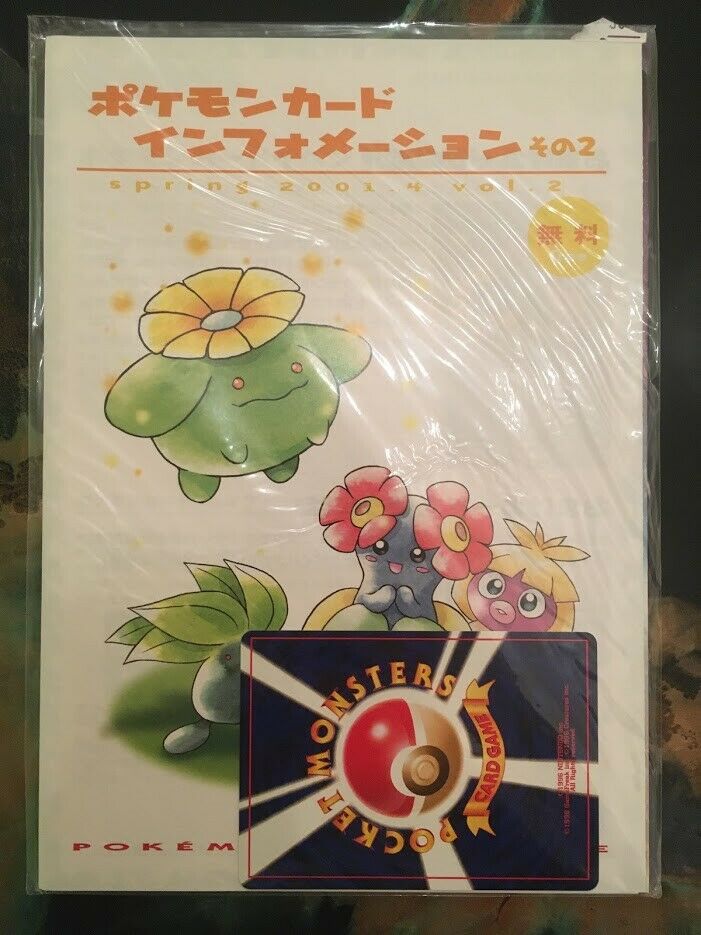 When Jungle first came out, my local card store had three copies of the 1st Ed Ivy Pikachu in the display case for $5 each. I bought all three and still have two of them. I had no idea they were special when I bought them, but I couldn’t afford any of the holos and thought they looked cool.

When Jungle first came out, my local card store had three copies of the 1st Ed Ivy Pikachu in the display case for $5 each. I bought all three and still have two of them. I had no idea they were special when I bought them, but I couldn’t afford any of the holos and thought they looked cool.

Thats awesome! I had a similar experience with Southern Island… but I didnt buy them because I couldnt afford it!

Heres the release date of the Trainer Mag Vol 2

Thank you all!
It is awesome to see the shared excitement among several members regarding a new piece of information that could change a bit of the history of just a simple card. To me, this is what makes the hobby beautifull and wholesome!

After reading everyones comments I went to grab the magazine once again and did a little more in depth research.

According to Bulbapedia - June 16th 1999 is the release of the Jungle Set in North America, however, also states that the initially release was intended for August of the same year and WOTC just published the set earlier due to being “forced” by the competitor Topps, which were releasing Pokémon Cards as well.

So this gives the magazine publication just 15 days ahead of the “rushed” release of the Jungle Set in USA.

With this information, my rational is that Media Factory, which is settled to publish the Trainer Magazine on July (having it’s last issue in the previous May) compiled the available information/prototypes at the time from WOTC between May and mid June, and had the magazine printed during the 2nd half of the month of June to have it ready for distribution country wide on the 1st of July 1999. So, to have the text “Capture the rare Pikachu card! Look on inside Wrapper.” printed, they had to have some kind of indication that there would be a rare Pikachu card that would be included within the booster packs.

Now this is just an illation, but I bet that WOTC’s decision to release Jungle to the public earlier was a “last days decision” and they rushed the already printed product (1st wave of Jungles 1st ed.) - cointaing the Promotional chase card - out of the gates to the consumer, which was not in big quantaties, because quoting Bulbapedia “Within two weeks, 1st Edition Jungle was sold out.”. In that commotion they forgot to mention/scrapped the idea completley, however the first wave had already had the Pikachu included so WOTC would be in line with Topps release.

It would had been already to late to re-edit the Magazine by the publisher Media Factory if they ended up receiving the information that the rare Pikachu Promo inserted in the boosters had been scratched.

Another point that makes me think that the insertion of the Pikachu was intentional is that on the Jungle Uncut sheets there was never a Ivy Pikachu (maybe @thecharizardauthorty can shed some light on the matter). And why would a promotional card that was likely printed in sheets by the thousands would have a 1st edition stamp printed on without it being intentional?

What do you think about this theory? Would be cool to have a ex-WOTC employee confirm this!

@prochaos , I don’t think that English Jungle 1st Edition had a wide release in Japan, apart from Pkonno I barely see anyone with 1st Ed Jungle product for sale, and I believe there would be more of this promo 1st Pikachu errors popping out and other set cards in Yahoo Auctions/Mercari/etc… As you said they did had a strong presence of Shadowless Base being sold at Pokémon Centers at the time, but I believe it was just that.

@prochaos , @shizzlemetimbers , you beat me to the post, I am too slow writting in English ahaha

@styluspt, Yeah this was an awesome find goes to show there are always mysteries to be solved even almost 25 years later! I would tend to agree that the information was written before the release of Jungle, maybe WOTC was going to use the Pikachu as an extra marketing tool to sell boosters but decided to drop it since it sold out so quickly. But yeah would be anyone’s guess!