I assume there’s no official number, but any estimated guesses on how big the print run of this card was?

I’d love to gather any and every information regarding this card, as it is truly a holy grail of mine.

(PS: The CGC pop report has 2 entries for this card, a 2000 and 2001 print. I believe this is a lazy error but could anybody shed some light on this?)

Thank you in advance! 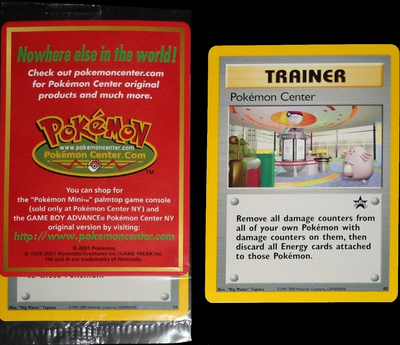 Hello, it’s one of my favorite cards as well. A 50% grade rate for a promo would be extraordinarily high and unprecedented, especially one this old and with this release method. Heck, I’ve never bothered to grade mine after twenty years. Having been to multiple Pokémon Center events at the time, my guess is tens of thousands for a promo distributed during opening week.

Definitely not 1000 copies, would likely be 10x that at least

The 2000 classification would be an error by CGC. Pokémon Center New York didn’t open until November 2001, which is where the card would have been distributed.

I assume there are tens of thousands of the cards printed, but like any freebie there are probably thousands that were lost and destroyed. Part of the reason movie theater promos are still surviving in their packages in such volume is because employees took home the surplus, but this would not be the case with this much more limited event.

I do know that there were way more of these cards around 2008-2009. It was not difficult to find them sealed and they were always on eBay when you searched for them. It’s possible that availability was because there was some surviving surplus that got worked through and now they’re all gone. However many were printed, it’s going to take tracking down a PCNY employee with a vivid memory of the opening week to tell us.

Yeah, I would have to guess there are many more than 1000 copies. Even recently I have stumbled upon these when I’ve bought collections of WOTC cards, which I don’t think would happen if they were all that rare.

Yeah, I would have to guess there are many more than 1000 copies. Even recently I have stumbled upon these when I’ve bought collections of WOTC cards, which I don’t think would happen if they were all that rare.

I got an English Championship Arena (sub-1000 copies card) in a random collection buy on eBay before, so it is possible

. I think qwachansey basically hit the nail on the head – except in rare instances, nowhere close to 50% of an entire print run is reflected in a pop report.

With 500 graded, 1000 is short considering it was a cello pack card. Many, including me, didn’t grade the rarer cello promos. We kept them sealed knowing we could always grade them later.
This doesn’t take away from the fact it’s one of the rarest cards in the 53 card black star set.

I’ve been searching for a while and it seems so less common than lucky stadium, but I think a lot of that has to do with search metrics. It’s generally the cheaper of the two because of the artwork, but think ‘Pokémon center’ really messes with search algorithms compared with ‘lucky stadium’ which is more unique. Even with added words, WOTC, Black star, 40, etc. I think there are a lot more because during my hunt I see far more ungraded than graded.

I’ve recently purchased this poster. It’s says 5000 available, but this is for online orders. They also gave them out in store. Based on a round number split I’d guess they would have 5000 in store too, but this is purely guess work. So I’d say at least 10,000 were made available.

I’ve been hunting a loose copy for months but haven’t found the right match yet. Only seen a handful loose, either too overpriced or too damaged (creases or folds). 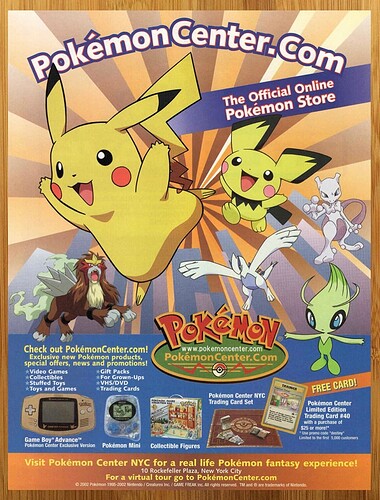