What are your unpopular opinions in pokemon?

Best way to do it is buy sealed boxes from sets that you dont want the singles of;)

Or just complete the set first then buy the box

Ewwwwww haha I only want cards that I want

My modus operandi and eternal curse is that the thrill of opening boxes is the best thing, and then after I do it I wish I could have a sealed box again. And have the holos as well.

…though nowadays the box opening experience is ruined for me anyway. Even when I can afford one I’d also have to afford opening the entire thing. Opening an entire box vs weighed heavies are two very different experiences. Especially when you do what I did last time, which is pull the best holo from the first pack and then proceed to pull only mediocrity from the remaining.

I feel stupid for not considering doing this but that’s an excellent idea. There are a couple sealed boxes where I already have all the cards inside so maybe I should try this out! For science, of course

The Pokémon scene of the late 90’s and early 2000’s (In my head I call it the Creation Era) are not as different from todays Modern Pokémon scene as some propose.

A Short explanation: Yes today has social media that pushed a constant hype and information flows way faster. New sets are hyped to sell more product. Product is mass produced. Its fun to open modern. There is a a constant barrage of opinions. This all creates a sometimes less than positive, darker side of the hobby. Its all relative. In the early years that darker side also existed. New sets were hyped to sell more product (though the hype took different forms and was seemed less visible, it was everywhere. And lack of info sometimes creates more rumors and hype). There was a print shortage. Then was a huge mass of printing. Its was fun to open product. There was the original flipper/scammer scene. Fake cards were around, parents and other adults stepped in and restricted kids trading, because the cards were “too valuable”. Fights broke out over product. Pokémon was even banned from schools and playgrounds. So all I am saying in this perhaps unpopular opinion is that todays modern scene doesn’t stray all that far from the Creation Era scene. Modern is over hyped, some folks are in the hobby merely to take advantage , there are STONKS and Flippers. All seems about normal to me. You get what you put in. Put in good vibes you get good vibes back.

You also had people complaining about prices. I still remember being in a mall toy store with my mom when I was nine, and a guy saw a Base Set Charizard in the display case and then consequently said to the store owner, “Fifty dollars for a CARD?” I’d like to see what he thinks of Base Set Charizard’s price now lol.

People just like to romanticize the past, but in actuality, the past really isn’t all that different from the present. What separates the two time periods is the overall exposure, as you said. Due to social media and the advancement of the Internet in general, everyone has more access to information in 2023 than they did in 1999. But that hype certainly existed two decades ago. It just wasn’t as enhanced as it is today.

I read this in Maxmoefoe’s voice

There are similarities for sure but the big difference is the amount of speculators. Modern chase cards prices today are more influenced by adults speculating than they were in the 90s.

I dont know. There is no book giving you secondary market values of modern sets. 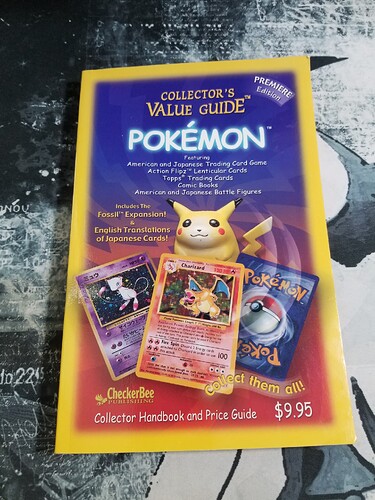 Lol, I agree with you 100%, but I just wanted to post this ridiculous book that somewhat shows the speculator culture back then.

If you are talking US Federal Min Wage, then it’s $7.25 an hour. Most people make more, but there are still plenty of people that make less than $15 an hour.

Ha ha! My State must be ahead of the curve . I’m impressed.

@niece Definitely! I think it’s just louder today and larger volume since all those kids are adults. I feel like the 90s speculators were more fair weather. Where now Pokémon is more a lifestyle for some people.