I guess so. But in that case I would prefer to have the entire deck and not just one card. For a few thousand dollars I would prefer an older Japanese promo or something.
But there seem to be enough people who disagree with me and that is fine

What would be your guestimate?

It is hard to know.

Remember when PWCC gave out that free $100 credit? I used $88 of it (overpriced but didn’t care and didn’t want to mess with an auction) to buy this fixed price CGC 8 Chansey. Crossed it to a PSA 9. Was a fun little experiment. 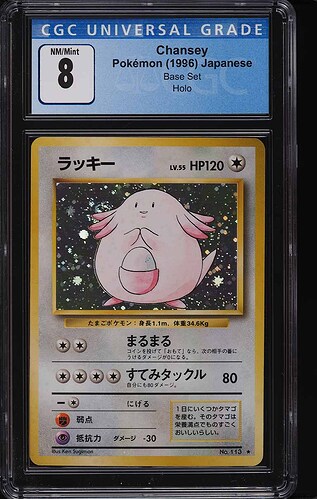 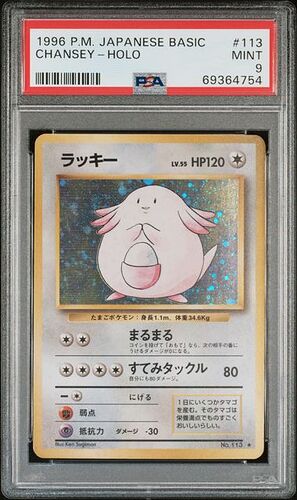 Is anyone bidding on the creatures decks cards ending tonight? I know the set itself is really cool and scarce but are there cards you’re drawn to more than others? The history gate and Chansey I could only dream of owning.

Won’t be bidding but I’ll definitely be watching to see where they go!

Also, in case folks didn’t know and they’re interested, for last week’s PWCC auction Pokichloe held a live YouTube stream in conjunction with PWCC discussing some of the cards up for bid and their thoughts and followed them through extended bidding. It was kind of fun to watch last week and hear a popular Poketuber’s thoughts, and likely will be interesting again this week given the Creatures cards (I just checked Instagram to confirm she is doing it again).

Rev did that back when PWCC was on ebay. It was pretty interesting seeing big cards selling at auction every 20 seconds

Thanks for that I may watch it! Dagreenshiz does this and I always enjoyed watching is.

Ludwig did it as well a few times. His chat was the reason a Jungle box got bid up to $4 million that one time. He said he was going to bid on it, and they thought it would be funny to troll him so he wouldn’t win.

For those keeping up with the recent Creatures card auctions, some of the bigger hitters from last night:

Then a small price dip:

Is the more or less than expected?

I’m actually not entirely sure (didn’t take the time to compare to recent sales), but they’re clearly desirable enough cards people will put up pretty hefty money for them. That said they’re also quite new with not a large pop so it’s hard to get a really good gauge on what “normal” might be.

What I think may be fun to watch is the PSA 10 Mew Ex coming up next week…it still has 6 days until extended bidding begins and it’s already at $4,200.

There will always be some (e.g., Chansey, Charizard) that fetch a massive premium. But this is exactly what I expected for the “typical” Creatures card.

Quick question, do I need special authorization to bid 5 figures on the pwcc weekly auction? I don’t want my bid to be blocked last minute.

You only need financial preauthorization for the premium auction.

PSA needs to do a better job at labeling sun-damaged cards. Someone, somewhere is going to see “Authentic” and believe that this Cyan Shining Mew is an authentic error worth thousands of dollars.

Same thing with this burnt-to-hell Charizard.

@petiparty can you label these as sun-damaged so that the buyers do not believe that they’re buying genuine error cards?

The cards are not labeled as errors on the PSA labels or in the item titles, they are just labeled as authentic, which they are. So I am unable to make inferences on the condition of the card from my opinion, no different than calling something a weak 10 in a listing. It would also be different if the cards were sun-damaged after being graded, but these were clearly sent in to PSA as is, and they were graded as such. If the customer had the titles changed to rare error or something like that I could intervene, but since they are just authenticated there’s not much I am allowed to do.

If you haven’t made larger bids like that in the past you should message the helpdesk to be safe, just tell them you will be bidding in such and such range, and to please approve the account for that much. Generally they do a check for $250, $1000, and $10,000 for weekly if it’s your first time to verify that your dog didn’t eat your phone and accidentally click the bid.

Same thing with this burnt-to-hell Charizard.

I saw this looking through the listings the other day and was wondering what I was seeing. To be honest, I figured they just messed up the scan and didn’t take the time to include a better picture since they have to go through so many cards. Glad I have some mental back up on what this actually is!

Speaking of interesting listings, not sure if folks are into slab label errors or not, but there are two 2002 E-Minimum McDonald’s cards up for auction where the label in the slab was switched between them: 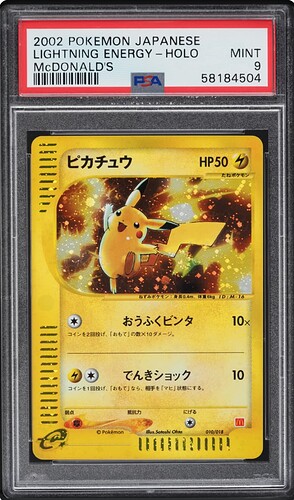 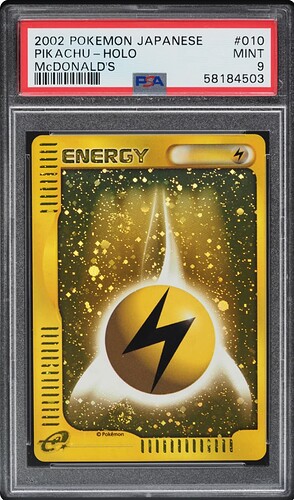