Set of the Fortnight #29 - Fossil Set

These Sets of the Fortnight aren’t every two weeks anymore, since I keep forgetting… Anyway, since we’re almost at 30 Sets of the Fortnight, I created a list for myself to keep track of which ones we already have and haven’t done yet. I noticed the earliest set we’ve done so far is Gym Challenge, so let’s change that shall we. Today we’re going back in time and are gonna discuss one of the earliest sets:

Fossil
bulbapedia.bulbagarden.net/wiki/Fossil_(TCG)
Discuss:
Favorite cards in the setWorst cards in the setHow you feel about this set in general
The third English Pokémon TCG set that was released, on October 10th, 1999 (and June 21st, 1997 in Japanese). This Fossil set completed the first 150 Pokémon released as TCG cards, together with the earlier released Base and Jungle sets. In Japan it completed the first 151 Pokémon, since the set also contained Mew. In English Mew was released as a promo instead. Eight Pokémon were part of two sets: Pikachu and Electrode were in both the Base Set and Jungle Set, and Gastly, Haunter, Magmar, Magneton, Raichu, and Zapdos were in both the Base Set and this Fossil Set.
What a lot of people don’t know, is that the Fossil set also has both a ©1999 and ©1999-2000 released versions, just like the Base Set. The ©1999-2000 Fossil set only includes all non-Holos though (with the exclusion of the Holo Zapdos from the ©1999-2000 Deck). More information about that in this E4 article.

Although I like all of the artworks of the Fossil Set, there aren’t a lot standing out in particular. If I had to pick some:

These two for having a great pose and background: 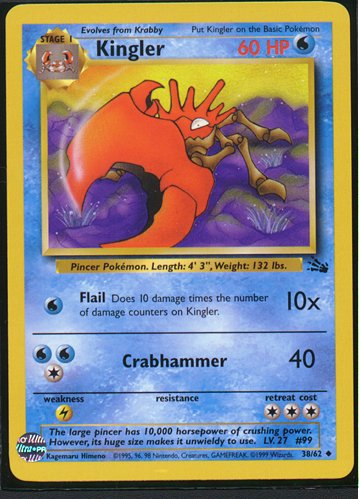 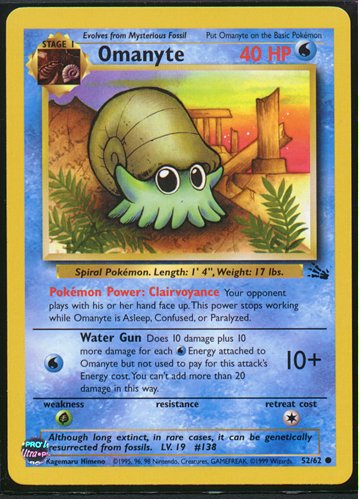 I also always like this (non-Holo) Ditto for some reason, even though it doesn’t contain anything noteworthy: 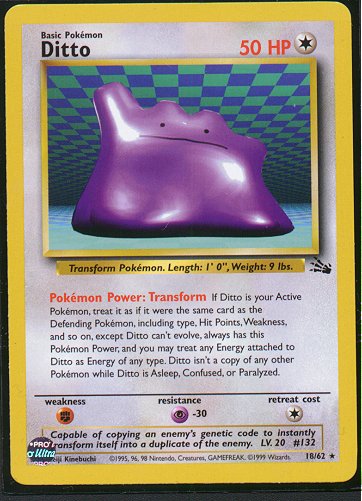 And as someone who collect(ed) fossils, how can we forget about the actual Fossil trainer card (also the second trainer card after Clefairy Doll with HP if I recall correctly?): 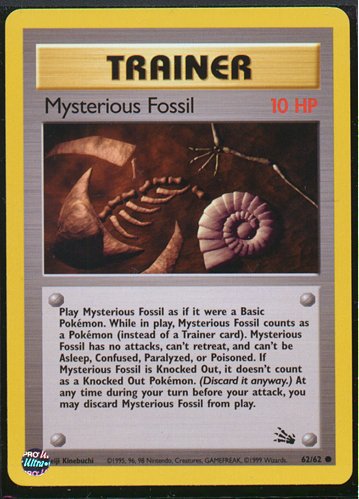 A solid set that continued to provide a general theme amongst most of the Pokémon artwork.
I also think they’ve selected a bunch of good Pokémon for this set; they all sorta fit the theme in general.

And some great cards by Ken Sugimori and Mitsuhiro Arita: 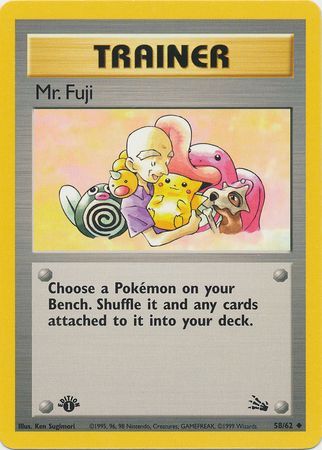 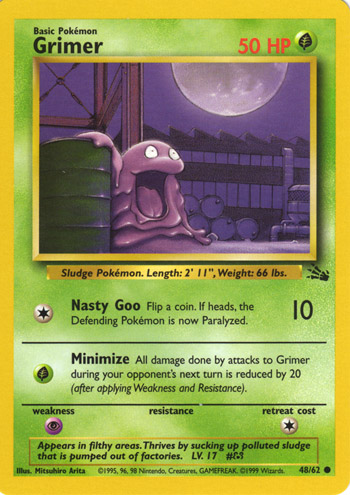 This set is one of those that step up the artwork game for the cards. After base set plain backgrounds, jungle + fossil background made the commons and uncommons damn attractive!

For me Dragonite is the best with that rainbow Holo. Why? Because there was only one kid on the playground with one, and it was the only one I saw until 2010 when I bought one xD

I vividly remember pulling a holo Moltres in my first ever Fossil booster pack when it was a new set, so that is going to be my favorite. I really like the holo Haunter as well. However, of all the WoTC sets I would say that Fossil easily is the least interesting. It did not add much to the meta game of the TCG, does not have any big wow-factor cards and many of the cards are a bit dull in coloring/appearance.

Dragonite has always been my number one favorite card from the Fossil set. Dragonite itself looks so cute and the background is really beautiful. The card is so pretty as both holo and non holo

I’ve always preferred the Fossil Zapdos over Base Set Zapdos as well.

And I don’t know why but I’ve always had a sweet spot for Fossil Articuno, especially the holo version. It doesn’t look as good as a non-holo imo.

Man I remember when this set dropped. It was such a nice feeling that all the pokemon were finally released!

The Aerodactyl was my first Prerelease card. I got it at the local toysrus with the trainer book. Now that Toysrus is closed it adds more historical value. 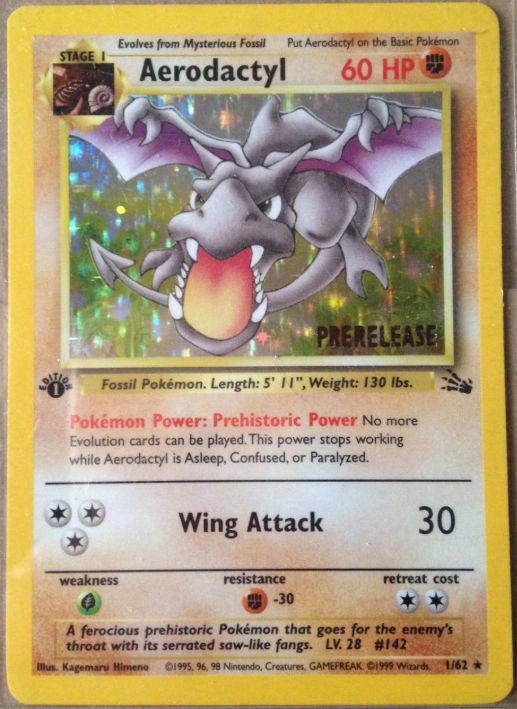 I also loved how they kept the CGI style for the Gengar Evo line. Back then it felt like ages waiting for the Dragonite and Gengar to finally release.

Also I thought it was cool that Mysterious Fossil had HP like the Clefairy Doll.

Overall I think this set is understated. We see Wotc cards bought and sold so frequently, but just looking at this set for 15 minutes brought back a ton of memories. Crazy it will turn 20 years old this year! 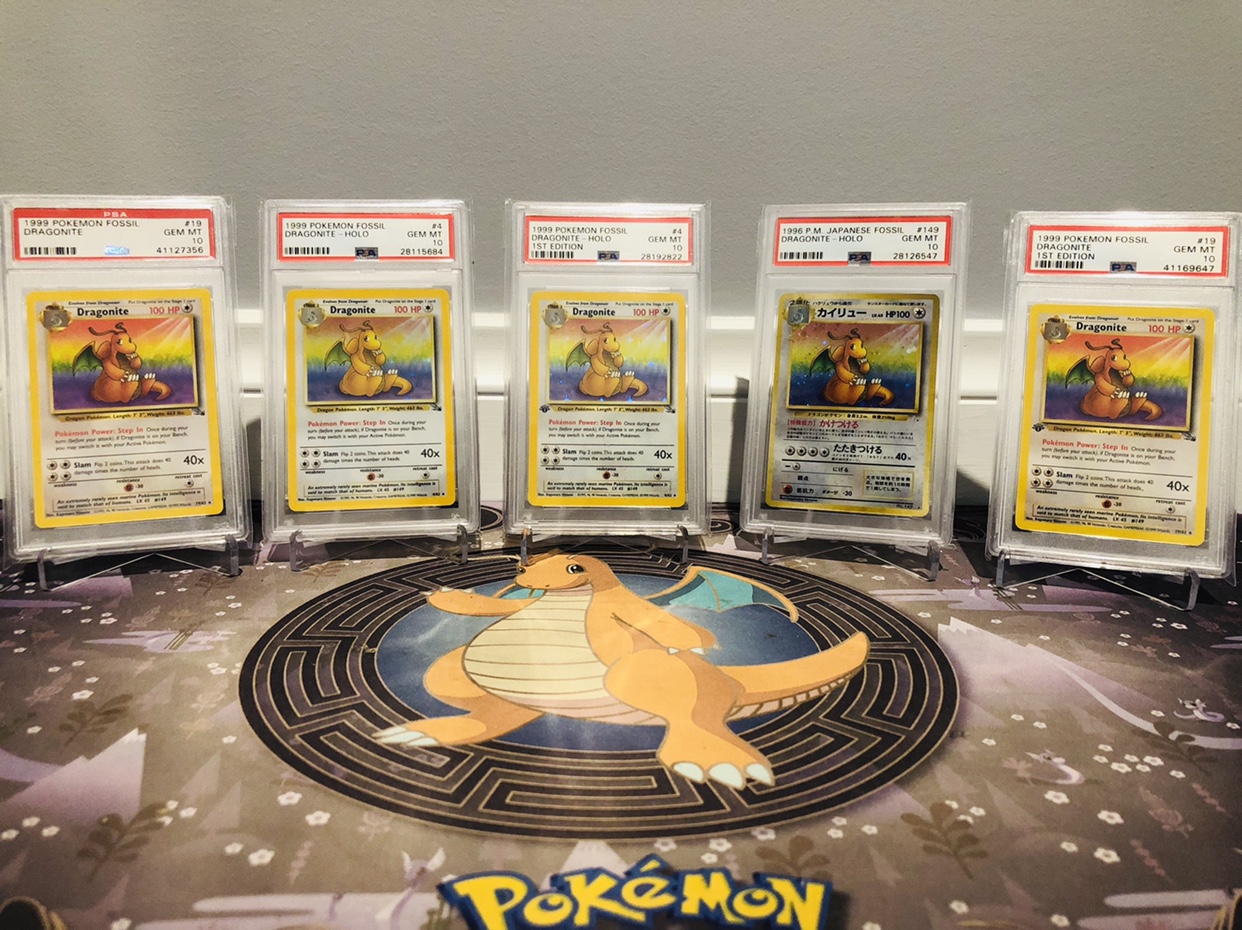 Seems like most of the Pokémon in this set fit the whole ocean and desert terrain where fossils are found. Blastoise would’ve fit well with Lapras, Omastar, Kabutops, Cloyster, Slowbro, Seadra, Kingler and Tentacruel. With that being said, this set always makes me feel like the kanto starters should’ve been distributed between the first three sets. 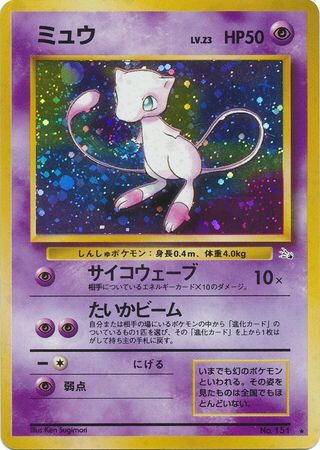 That gengar though… damn.

Curious what peoples thoughts are on the TMB bird phone cards… Always struck me as interesting that they featured the fossil set symbol; obviously they’re very hard to find non-TCG cards (even if they do have a TCG card printed on them) with a very specific release and there were no where near enough produced to complete every set. Just an odd side note when compared to something like the Coro Coro Mew - a shining promo card which fits in with the Neo Destiny/ Neo 4 set and seemingly has a bountiful enough release.

I love fossil. This is the first graded set I completed! Lots of memories from my childhood with fossil. I love the box artwork/ pack artworks. Articuno, Aerodactyl and Gengar are My favorites from this set.

I realize I’m a bit late here, but Haunter was the first holo I ever pulled. I remember opening that pack and seeing the deep, inky royal purples of the background holo, quietly cut through by the occasional holographic sparkle as you hold it… and the contrasting watercolor of the Haunter cleverly reaching out of that magic purple cloud as if ascending from the ether.

Even though other cards are way more valuable, when I see that card in person, I still get a little thrill.

They nailed the colors on Fossil cards. To date, they have some richest-looking holos I’ve ever seen. Not through sheer geometry, like some of the newer cards, but through stark and subtle use of color and light. It’s the Japanese haunter, but this photo conveys the card better than any of the English I could find.

Hmm, never been a big fan of Fossil, but after reading some of the comments, I’m gonna have to go back and look at them more closely!

The dnite in this set is simply epic.

Big Fossil fan. Aside from the usual suspects (i.e., Dragonite, the legendary birds, etc.), my favorite cards are Haunter and Hitmonlee.

As a conservative Gen1er, I like to consider Fossil the end of the Golden Age.

Big Fossil fan. Aside from the usual suspects (i.e., Dragonite, the legendary birds, etc.), my favorite cards are Haunter and Hitmonlee.

As a conservative Gen1er, I like to consider Fossil the end of the Golden Age.

I remember opening up Fossil packs as a kid, which paralleled nicely with the Pokemon episode I saw where Aerodactyl was finally revealed. As for the cards, I’ve always enjoyed Kabutops but of course he isn’t a fan favorite. He reminds of the land-version of Scyther.