Set of the Fortnight #4

It was a long fortnight…

Favourite card has to be hitmontop. I still remember pulling him from my first pack as a kid. Love the playful and vibrant artwork/holo on the card and at the time I was a fan on hitmontop period.

Is there even a discussion around the best cards from this set?

Unfortunately I do not own either of these now, but they are the stand outs from this set,

On a personal level, the best ever Kabutops artwork is from this set…

I wish this card got a holo

Also this is the best artwork:

I’ll always have a soft spot for Neo Discovery, as it was the first set I collected when I had a pokemon flare up a few years backs. It fades into the background though when compared to its other Neo siblings, although I prefer it over Neo Genesis because of the more diverse artwork. The holo cards are a little lacklustre except maybe Espeon/Tyranitar/Dark Raichu (Japanese). A cool thing in the Japanese set is the alternate artwork for the Ruin Wall trainer.

Favourite cards are Weedle, Pineco, Poliwag and Forretress. Least favourite are Kabutops and Politoed, not on their own merit, but because I pulled about 5 of each and lamented not getting the other holos.

My favorites are these four: Great pose for both the Kabutops and Scissor (Scissor was also the first card I got from this set, both a holo and non-holo version in two sub-sequential booster packs). I don’t have the Espeon, and only added the Magnemite to my collection about halve a year ago, but I love both of these pictures, especially the backgrounds.

As for my least favorite: there are quite a few drawn/blocky cards in this set (not sure how to call it), which I usually don’t really like. In this set however they are all pretty good.
There is just one card I personally don’t like / almost hate, which is this Larvitar: Only once I saw it in the anime after I already had this card for several months I was like: “WHAT?! THAT is Larvitar?” I never realized I was only looking at the head on the picture, instead of a ‘full’ Larvitar. Because of that this is probably one of my personal least favorite artworks ever (although at the same time it’s kinda funny I guess…

So to start out my thoughts on this set I have to say it has one of my favorite card artworks which is the lovely and beautiful mareep! It is just such a great card with amazing colors and filled with cuteness!

Another great card from this set is

this guy
I also really enjoy the pack artwork for both the japanese and english packs.
I thought it was a relatively easy set to complete with only a few trainers and not as many cards as most sets.
Overall I give it a 8/10 and enjoy this set quite a bit so I really don’t have anything negative to say about it except that some of the common and uncommon cards lacked character but again still a pretty awesome set imo

I don’t even know anything about this set, but I really love this card illustrated by Atsuko Nishida. It’s beautiful!

I’m usually not a fan of the earlier sets but the artwork is just exquisite in this set. The holos feel like they were drawn from the beginning with the artist knowing the card would be holo, so they were able to draw a complementary illustration.

I think this is tied with Neo Revelations as my all time favorite set. The artwork is just so amazing and that holo sheet of this ear was perfect. I will recollect this set some day.

I don’t even know anything about this set, but I really love this card illustrated by Atsuko Nishida. It’s beautiful!

I’ve always loved that card too, Atsuko Nishida is one of my favorite artists from the TCG.

The non-holo Umbreon from this set is also great:

I absolutely love the kabutops in this set and the fact that it’s a water type!

Not the most popular Neo set for me personally but it still has lots of great artwork. Favourite cards have to be Kabutops holo and Umbreon holo, another picks from non holos are Poliwhirl, Poliwag and Scyther.

I loved all the neo sets, including Destiny.

This set has quite a lot of cards I like but my favorites have to be the holo Umbreon, holo Espeon and Kabutops. Also the common card Mareep is too cute :3
I’ve openend a 1st Ed. box of this one some time back and it was great box. I’m only missing 3 holo’s: Wobbo, Espeon and Forretress.

Always thought that Neo Discovery was way underrated and overshadowed by the other Neo sets. I have a friend who collected Genesis and Revelation thinking that “all the important stuff” from Gen 2 were in those two sets, only to now circle back to the Discovery cards because he felt like something was missing. I couldn’t help but give him a “I told you so” look after hearing that.

It’s the glue that holds the Neo sets together; an irreplaceable piece of the puzzle. If it weren’t for the Shinings, I’d take Discovery over Destiny anyday; the one off Light/Dark gimmick of that set was icing to an already delicious Neo-cake at best.

I wish this card got a holo

This beedrill card was a holofoil in the Japanese set, alongside with this butterfree. 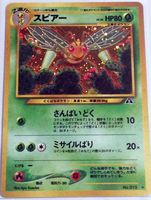 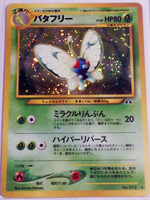 Umbreon holo is the only card from the set that I found cool. The exquisite moon background elevated it to god tier for me. Was stoked when I pulled it from a booster back then. Till this day among all the umbreon holo cards, it remains my favorite.