The Mystery Boxes seem to have hit the shelves. Since I don’t really follow Poketubers I didn’t hear anything about the box. What do you think about the product? 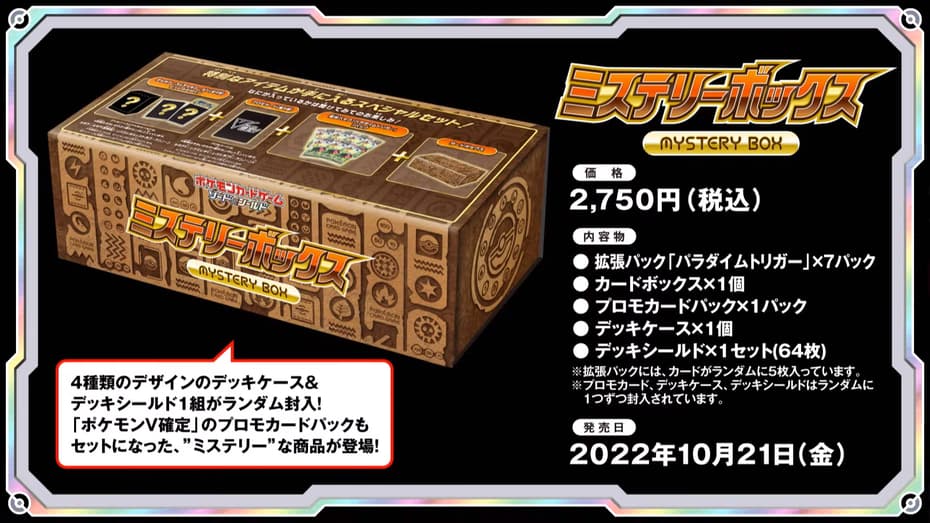 Here is a link with more info for those interested. I stay away from any type of mystery box. Usually it’s not going to be in your favor if they don’t want to show you what you’re getting. This is at least a Pokémon company mystery box instead of MJ holdings or some hype dawg from Whatnot dumping their junk.

I thought the box would have those hideous graphics on top so I didn’t buy any. Turns out the graphics aren’t actually on the box like that lol. I think the design is really cool like Ancient Mew, and it seems like you get some packs so I think it’s a good product. Reminds me of the mini Crobat box we got a couple. years ago

I saw pokeRev open like 5 of them today and it has some fairly cool stuff in it. The “mystery” is just that the type of deck box/sleeves and which sealed promo you’ll get is randomized. I recommend his video if you want to see what’s in there. Some pretty cool deck boxes/sleeves if I do say so myself! Not sure about the price people are selling it at is good but yeah. Id rather buy a mystery box from Pokémon directly than a third party.

I’m not big on mystery boxes but I think it’s interesting Pokemon is cashing in a bit on the mystery box phenomenon. The box looks pretty nice at least!

Dropped the ball on the promo inclusions. Could have had a few different promos in the similar style of ancient mew or the outside of the box but theyre just meh. I love the outside design of it but not sure if Im gonna get it because of the contents inside.