What would happen if an unrelated investor bought out the vintage market?

This is an open discussion and just a hypothetical question but I believe there’s quite a limited quantity of vintage booster boxes today now that a lot of them were opened a few years ago.

What would happen to the market if someone who had nothing to do with the community that had the mass wealth to dispose of bought out all the remaining publically / privately listed vintage booster boxes/loose packs and sought-after cards (trophy, illustrator, etc)?

There may be some obvious answers but I’m curious and also surprised that no one has yet.

Because there isn’t one central location to buy every vintage box. Let’s say someone with 100m wants to buy every box, trophy card, or whatever high end item. That’s enough money right? The problem is product is scattered with numerous owners, most who don’t want to sell or take a loss. Also once the buyout begins, sales data will make owners increase their price.

Another way of looking at it, it’s the same as the total market demand. Whether it’s one individual buying or millions of people, the process is identical. It’s why arguments of “market manipulation” are always so weak, because you simply can’t go to the vintage product store and buy out everything. You have to compete in an open market with other buyers, which is why the actual hundred millionaires in the market today don’t own every single copy of a card or box.

If the millennium puzzle and dragon balls can be collected, anything is possible

Vintage buyouts do happen. I’m most familiar with them in MTG as opposed to pokemon but I’m sure they happen regularly here too.

Sometimes they happen when a single item is considered excellent value for money or underpriced, other times small groups can try and pump the price of a scarce item temporarily and sell to “investors” that lag behind.

99% of items have too much supply for anyone one person or group to take over a majority of the supply, but it isn’t too hard to dry up the supply of something scarce before the latent supply is able to get onto the market - generating some artificial inelasticity.

Typically, when this has happened with key MTG Singles, the market corrects in the medium term as more supply enters the market in response to the pumped prices. If the buyout was all based on speculation then prices likely retrace back to normal or even lower than before. But, if the card was actually a bit under-appreciated at the time of the buyout, it will typically come back down some and settle at a new, higher normal.

It’s also conceivable for a well-off buyer(s) to establish a new floor for an item - especially if they have a lot of interest in that item personally. If they see X item under Y price they just buy it out. Doesn’t have to be higher than average, or include every listing of that item though.

Generally, these strategies are pretty high risk with low reward - otherwise, they would happen more. They occur most when the market is due for a correction anyway; when latent demand outstrips current/latent supply.

With super niche or rare items, it might be more feasible for one person or group to control a majority of the supply but you run into different problems there. Access to latent supply for one, or lack of latent demand (you might be one of the few people who even cares about that item).

A personal anecdote is that there is a specific sub-set of clothing items from a specific designer that I purchase whenever I see one appear - no matter the price (I am primarily a collector of 90s-00s High Fashion). I have little competition for these items and afaik I have the largest collection held by an individual. Does this count as a buyout? I’m not so sure since the items are not well understood so I really have no idea how much supply exists. I suspect a vast majority of the remaining supply is held by people who have no appreciation for the clothing (at least not compared to me).

Interesting but not possible. There’s no point worrying and putting brain power to thinking about something like this happening. If some guy has enough money to buy all of a certain card, good for them I would too. cough cough shiny Dedenne. (I’m looking at you @Dizzle). Like Mr. Pratte said, everything is too spread out for it to be possible. I like to think about more productive things during my day like if my McDonalds cards investment will 3x.

If someone bought all of garys zards at once that would be signifigant enough to own a good chunk of the pop for that one card, but thats far from the whole vintage market. It would be interesting though

I think it’s really hard to do, even hypothetically. First, so many people within this hobby and other similar ones are very attached to the rare and high-end collectibles that they may never ever sell them to begin with. Even if someone with infinite funds tried to do a buyout of anything, it would take years and years to build a position because you’d have to hope that whatever it is you are trying to corner on the market would even have to come up for sale in the first place. It’d be near impossible to “Catch 'Em All”.

Even if you take Gary’s BGS 10 1st Ed Charizards for example, I doubt he expected someone like Logan Paul to come along and crack a PSA 10 for it to come back a BGS 10. So now he no longer has the only 2 BGS 10s in the world, and now there’s a 3rd one. So to me there’s always going to anomalies and other things that happen that would prevent anyone or anything from truly buying out anything.

You could probably acquire 10% of the population of the card for $5000. And maybe another 10% beyond that for another $7500. And maybe you could squeeze out another 10% beyond that for anther $10,000. But at a certain point, you won’t be able to acquire more copies unless you’re willing to pay inordinate sums of money for each card. Once you exhaust the copies owned by eager sellers, you’re stuck dealing with collectors who don’t care/need/want to sell.

For those of you who like data, a small YouTuber named AlphaHoarder shared actual financial results from one of his MTG buyouts. It’s pretty interesting to see how the market reacted and then corrected.

Whether the same situation would happen in Pokemon is tough to say, especially if we are talking about items that cost tens of thousands (e.g., vintage booster boxes). 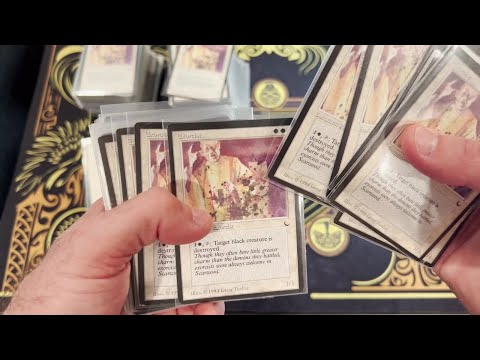 I’m gonna use a member here as an example, I don’t think he will mind since the world already knows thanks to his instagram posts haha!

Look at @betapoketrader, he did some amazing stuff with 1st edition neo gen lugia. He got 1/4 of the population of that card in PSA 10. He timed everything perfectly imo. Came in when people were willing to sell. After that first 120k sale came in at the height of 2020/21 madness, lots of sellers came out of the woodwork hoping to capitalize.

As a result, supply increased and naturally, the price fell. However, similar to the examples others have given, the amount of lugia remaining for sale has dwindled. Theoretically, someone hoping to buy is gonna have to contend with stricter sellers. Those who held likely don’t care about a quick buck and are holding for sentimental reasons or because they are able to do so.

End result, 1/4 of the market is in one guys hands, and the rest of the market hasn’t budged yet. Getting all, (what 43 copies now?), is gonna take years to source and compile. I’d venture that it would take at minimum a decade. Of course totally pulled out of my butt number. But it doesn’t seem farfetch’d (pun intended🤣)

So yeah, the TLDR is that buyouts for vintage are near impossible for most cards. Some would be possible I guess but it would still take dedication. We still don’t even know where some Pokémon snap cards are, it’s been 20+ years since those were a thing. How in the world can someone buy them out haha! Or maybe someone else has another warehouse full of gold star ray’s that they forgot about. We don’t know what happened to the supply out there either.

I feel like there is a parallel with some business models.

Imagine a fantasy taxi company gets a shed load of investor capital, it comes along to fantasy city and says we will operate at a loss for x years until all the existing taxi companies are out of business and disappear. We can afford to do so, due to their huge amounts of investor money.

Once the competition is dead, we can hike our prices as we control the market.

The difference with trying to do it with a vintage resource, is that the cards are not in their own right making any money.

I may be a collector and am prepared to pay a large amount of money for a piece of paper, but EVEN if you control the market of whatever card/set, what do you then do with it?

The resources are not making you any money on their own. So you need to resell them.

If you hike the price so much that you can make back your money that you spent operating at a loss initially, then new buyers will be discouraged and go collect something else. If you increase modestly, then you will never make your money back.

Specifically with cards, with it being a consumable resource, once the buy-outer starts selling his product, market share goes to the community at large again. So it’s not exactly a 1-to-1 comparison with the taxi company. The supply of taxi drivers will “never”, in the case of the example, go back to another company. So they can continue charging whatever price they want within reason.

That “within reason” is also another crucial part to the story. Let’s go back to lugia. Even if lugia was entirely bought out by one guy, would it’s price ever surpass something like illustrator? Probably not. There are kind of “natural”caps to cards in a way. Ofc there will be inflated prices for it initially, but it wouldn’t be able to go extreme as buyers just won’t buy in at insane prices.