Just a small news for people outside Japan so I’ll leave a post here instead of a new thread.

Yahoo Japan is tightening up requirements to sell trading cards on their auction platform - starting from December 12, listings “meeting certain conditions” will require sellers to go through eKYC process (the “send a photo of you and your ID” thing). Conditions forcing eKYC (price threshold, account status, etc.) were left undisclosed.

Personally I would just find somewhere else to sell if I ran into eKYC requests (still a bit repulsive against requests of both photo and ID over internet), but hopefully this should reduce possibilities of people running into scams when buying cards from YJP.

That’s good news. There have been a significant increase in fake cards and listings on yj. I wonder if this will push more Japanese buyers/sellers onto eBay?

For pushing Japanese onto eBay, this new policy might mostly affect those who were doing foreign trades as Japanese sellers on eBay tend to avoid Japanese customers. (Try switching your location to Japan - you’ll be surprised at how many Japanese sellers NOT shipping to Japan albeit in the same country!) My guess on the reason is that it’s hard to apply anonymous delivery on eBay while the option is essential for most Japanese auction platforms.

However the new policy will definitely help suppress fake listings or even dropshipping from Mercari, so I’m looking forward to that!

The mystery as to my V-Star Universe lottery status continues. I waited but never received the successful application or unsuccessful application email and the product didn’t show up in my order history, as expected. But today, I just got an email telling me that payment has been successfully processed, which is a bit WTF. I go into my PC account and lo and behold V-Star Universe is listed there AND has apparently already shipped (出荷完了) a week early! Except no shipping confirmation email unlike every other product I have bought LOL. Quite an interesting ride so far.

Congrats! Are you using a proxy service? I’ve never won a PCJ lottery using a Tenso locker address, so I’m hoping to put the PCJ lottery/Tenso conspiracy to bed!

No, I use my local address. It’s just that recently I’ve been signing up for them and not receiving any confirmation that I’ve won or lost unlike everyone else.

Have no idea why my order is listed as shipped, but perhaps that just means they sent it out to the courier and they’ll hold it until release day. 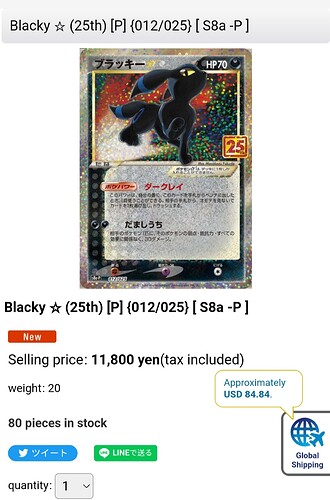 Well that was faster than expected. There ya go, its dropped like 40% in the past month. Other 25th cards are starting to come down slightly, Umbreon dropped first, and the hardest so far. Interestingly, Shining Magikarp hasnt move at all yet, still 5,480¥. Other notable cards like Birthday Pikachu and the Kanto starters have dropped 6-7%.

Nothing too wild happening right now, but potential signs of correction.