I’m an aspiring collector in Brazil, if the text is weird it’s because of the translator, sorry.

I recently received this Shining Charizard and I’m thinking it’s fake. The lettering of the cards seems to be weak and the back of the card is as clear as the cards they are currently releasing.

In the second image Charizard is the card that is in the toploader and its left is a base set card, note that the back is lighter.

And in the last photo is an example on ebay where Charizard also has a darker back, unlike mine which has a light back.

Thanks in advance for being able to help me

Variation in card back is normal, and this is definitely within the range of real cards. It is very hard to tell from a single image of the front in a sleeve and toploader (at an angle) whether the card is real. It looks very grainy and the printing doesn’t look crisp at all. The stars in the bottom right don’t look like stars for example. The black ink also seems to reflect some light (see for example F in “Flip” or “Flame”), which doesn’t happen with real cards. Just based on what I can see, I am inclined to think it is fake. Take a picture of the card without toploader and sleeve to know with more certainty.

Nevermind the art gave it away, check top wing:

Looks authentic to me

@lobera , As mentioned before by @expedition , it’s difficult to tell with a single image … More than Charizard’s wings, there’s something that doesn’t match for me … It seems like your Shining Charizard is kinda zoomed … 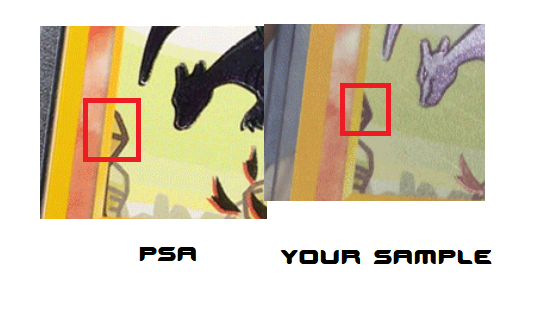 Looks legit to me tbh

Fake, there are multiple examples of the art being scaled differently in english vs japanese, but not on the same card in the same language and the same edition

Ah didn’t see this picture. On this picture its a clear fake. Sorry for the confusion, the .gif earlier looks legit