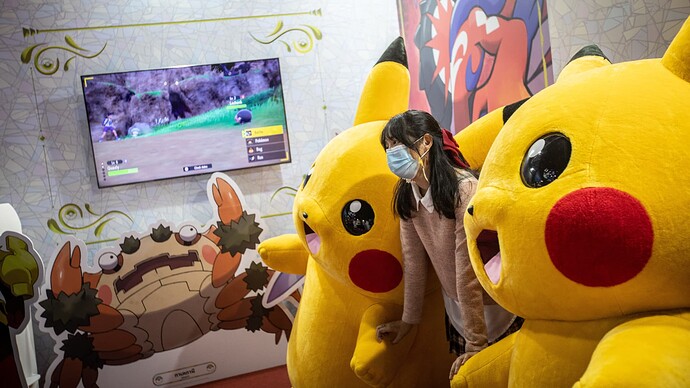 Nintendo said sales of Pokémon Scarlet and Pokémon Violet for the Nintendo Switch surpassed 10 million units in the first three days since launch on Nov. 18.

Thoughts? I’m loving the strength the Pokemon market continues to push forward with despite such a negative/bearish year we’ve been in. Looking forward to see what comes out of the TCG side in respect to Scarlet & Violet, seems exciting!

That’s a shame, considering all the issues with the game. I was really hoping that sales would tank or be quite bad, thereby forcing Nintendo and Game Freak to put more effort and resources into their future games instead of being able to spit out garbage and make massive stonks.

Sadly, this has been the norm for some years now. No matter what product you produce, as long as it has Pokemon in the name it will sell tons.

I am glad for the company. I also worry that this record will discourage internal critiques of their games. This type of success tends to create a “yes man” culture of quantity over quality.

The amount of potential Pokémon games have if they would just make it „real“ open world….

Thoughts? I’m loving the strength the Pokemon market continues to push forward with despite such a negative/bearish year we’ve been in.

I’m not sure if you are referring specifically to the game selling well or the tcg? If its the former, I don’t think economic conditions would make any serious dents in the games’ sales. $60 really isn’t a make it or break it price for most people, especially those who already own switches and are/were excited for a new pokemon game. Its also that part of the year where people spend lots of money on things.

Unrelated observations:
Looking at this gen vs swsh, this time most of the negativity surrounding the game has come after its worldwide release. With SWSH, much of the negativity started during the summer when dexit was first brought up and then picked up again once the games released. Just thought it was interesting

i really hope they actually fix SV. It’s a shame because the games are actually very enjoyable. SwSh had more polish (never thought these words would be spoken), but at the expense of content (later padded out with paid DLC). SV is solid in terms of gameplay and content, but at the expense of polish-- like in it’s entirety. the game is unfinished.

I guess it makes sense that the newest generation of mainline pokemon games would be explosive in popularity, after the surge in pokemon hype over the past few years. still, this is huge. i guess it’s only natural that it would be pokemon lol. this begs the question… if sv is Nintendo’s record and sony’s record is around half that with god of war ragnarok… does this make scarlet and violet the best selling video game debut of all time?

I mainly am just referring to the fact that across the board Pokemon still had a really strong year in many areas (TCG, video games, etc) despite that overly negative market sentiment and the slowup impacting many other industries and even their own competition in the gaming and TCG space. Its continued to prove its value as a brand. So many things collapsed this year, but Pokemon just continues to move along strongly with no end in sight it seems, which I think is cool.

I think part of the reason sales are so high, is too many people preorder the damn thing without waiting to see what the reviews actually say or what major issues exist at launch. If more people took a wait and see approach, I’m sure the numbers would be nowhere near what they are. Hopefully enough people feel burned from this release that they don’t preorder future releases.