image1123×1128 380 KB
Longtime Pokémon illustrator Mitsuhiro Arita will be making an appearance and signing autographs at Ocala Comic-Con on September 17th & 18th in Ocala Florida.
For tickets and more information you can visit the website here: www.ocalacomiccon.com

Feel free to post here if you will be attending the event and what cards you’d like to get signed!

I’m a total noob at signings - do you guys just fly into Orlando a day early, take a car to Ocala, stay at a hotel and line up hours early? I know Arita has done Ocala several times before and I’ve heard the one he did right before covid was a mess. Also what are the chances of being able to get in line twice?

Yeah unfortunately the last event was a mess due to a number of reasons. Ultimately they were unprepared for the amount of people that turned up and didn’t have a solid queue or any rules in place until day two. Not to mention it was also in what amounted to a hotel lobby. However they have moved the event to what I believe is a larger venue and I’d imagine they will be more prepared this time. Looks like 3 personalized autos per visit, similar to the Kouki Saitou signing.

As for the travel I would recommend staying closer to the event unless you plan on spending extra time in Orlando or the surrounding areas. Orlando to Ocala is a bit of a drive. And I always like to be a few hours eary

Thanks - do you recommend flying into Gainesville? And do you think it’ll be possible to get 2 signings in? I’ve heard the lines can be incredibly long, if it’s 10am-6pm, idk if it’s possible especially if you get there a bit later

Gainesville is certainly closer and will have little to no traffic going to Ocala. It’s basically just swamp-land out there lol. As for this event I couldn’t say how busy it will be. I’d imagine if you attend both days you should be able to get in line a couple times… maybe? It all depends on how many people show up really.

Would love to get some cards signed, hopefully he comes to the UK soon!

Will be in Oslo in 2 weeks, take a trip

I heard they only do personalized signing now, anyone know what this means

It means they will address the signature to you “To ____”

And they are firm on that? Only to me, not trainer or somthing like “everybody”

Please don’t. You know why personalization is required and pushing for “letter of the law” loopholes to aide in flipping is just going to make signing events more clamped down in the future, if not forbidden entirely.

It’s more like I have 4 children og would like to have 1 starter to each, but have no option to go my self, and have made arrangement with a friend to take the cards with him.

Or will they only sign the person that is in the line?

Yes absolutely then you can get cards for your cousin named Everybody, uncle named Trainer, and roommate named Ken Sugimori. NP.

Thanks for posting. Will definitely keep an eye from future events. Lots of info for a noob-to-signing here.

Was this posted on arita’s website? I haven’t been checking that for quite some time…

Yeah it is posted under his events tab

I just got word from Ocala’s organizers in an email that “He won’t have time for any commissions.”
Which is sad for me - but maybe next time, hopefully!

What does that mean, exactly…? 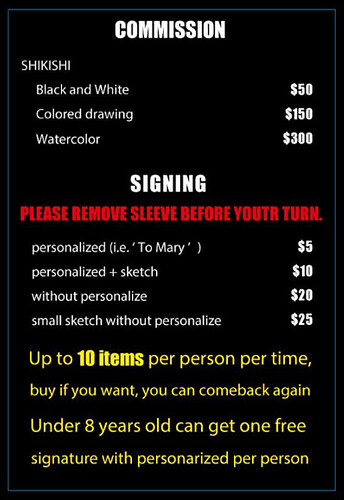 I’ll be going to Ocala, is anyone else going? Trying to figure out which airport is closest.