This article aims to provide an easy English reference point for a rare home media release and its accompanying promo card. But before I proceed, I’d like to give credit where credit is due to the folks who’ve documented this release in the past.

E4 Thread by KEI - If you’ve ever heard of this promo release before now, it’s probably because of this topic. This topic is the only proper documentation of this card in English and pretty much broke the news that this card exists to western collectors.

Copy Cat - The Many Ways Mewtwo Struck Back - This old fan site, a relic of a more personal internet, is a brief summary of various different releases of Pokémon: The First Movie.

Dogasu’s Backpack: Mewtwo Strikes Back - The Kanzenban - This robust, and still current, fansite gives a more detailed breakdown of what the Kanzenban release of the movie was.

Personally motivated archivists like these folks breadcrumbed the information people like me needed to understand and collect this card. In the big wide internet and the many resources in the English language, it is only these few people who took the time to benefit future collectors like me who might be interested in a subject as niche as this. 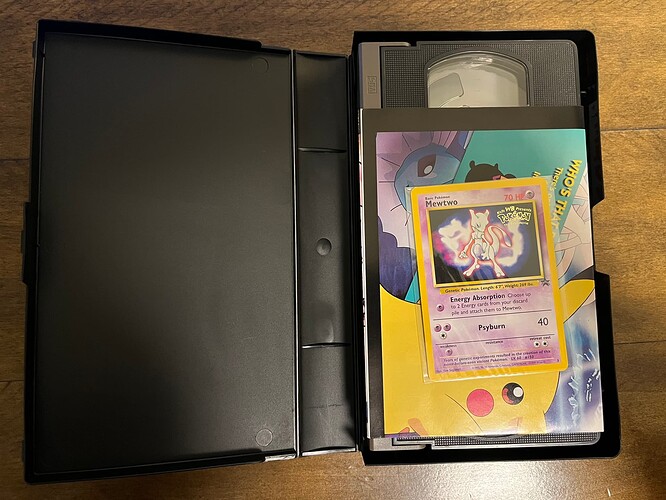 However, the Mewtwo #3 has always been much more off the radar.

Plainly, this card is a Japanese release of Mewtwo #3 Black Star promo. It makes every attempt to mimic the original English release, but features some very minor differences that differentiate it from its predecessor. It’s printed on Japanese card stock, it has a lighter and more washed out color complexion, and it has a slightly different finish. Without putting the two cards side by side, it is very difficult to distinguish which card is which. In this image, the original US release of Mewtwo #3 is on the left. The Japanese release is on the right. 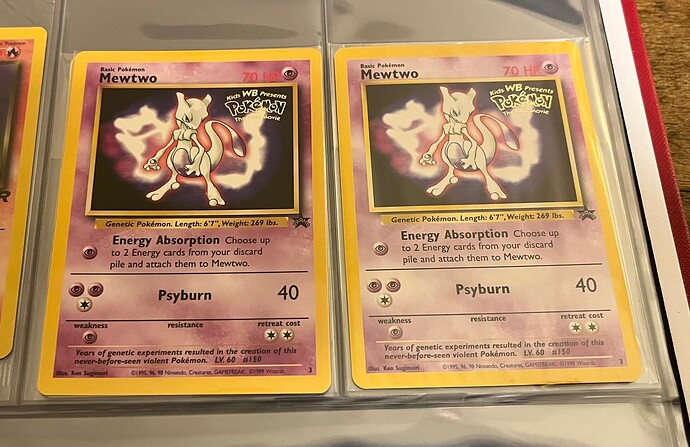 The Japanese release also has a smoother finish whereas the English card features a more rugged texture. This is best illustrated in an image from KEI’s old thread, which I will borrow here. In this image, the Japanese release is on the bottom. 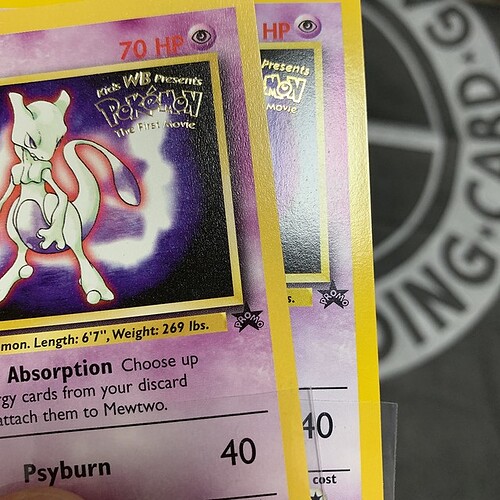 The only saving grace when it comes to identifying this card is that it was distributed in recurring Japanese packaging. Like CD Pikachu, this promo is sleeved in plastic that is folded over on top. There is a single piece of tape securing the flap, but what exactly this tape looks like can vary from card to card - even the same release. 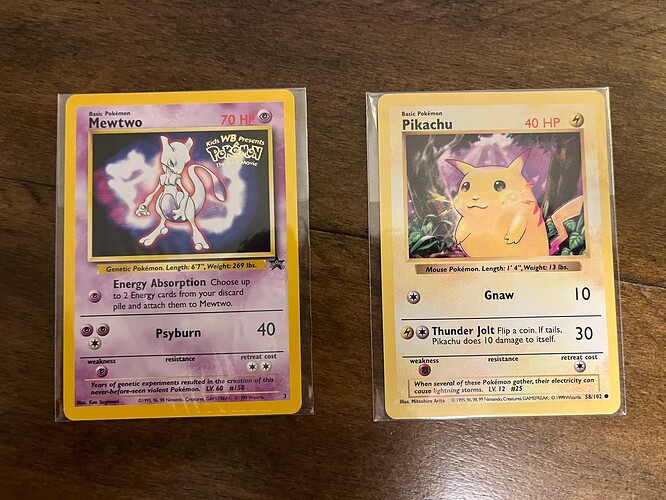 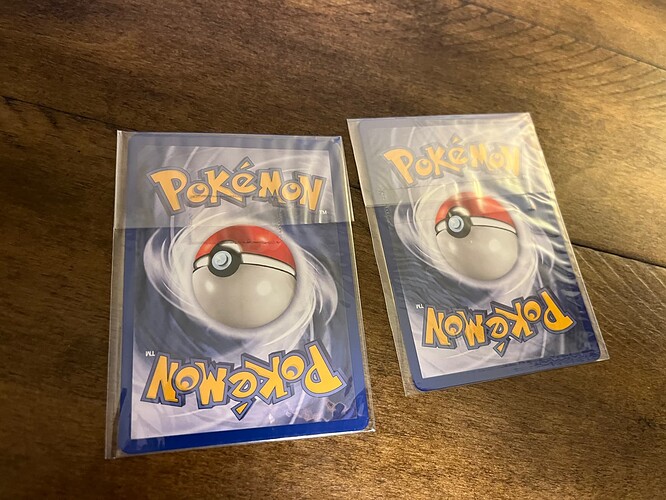 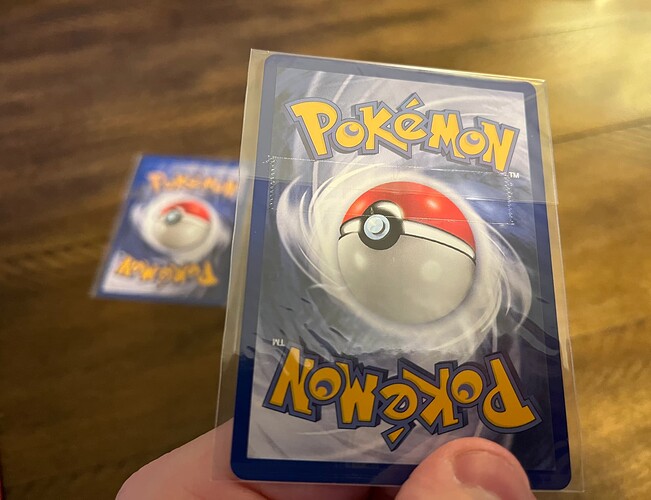 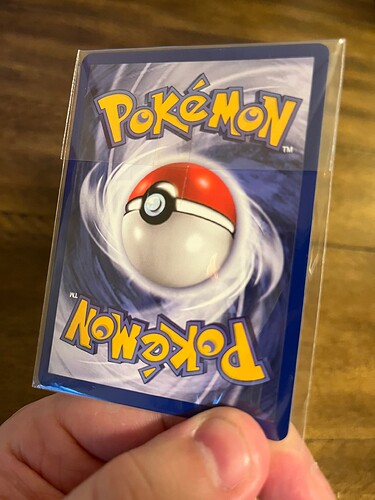 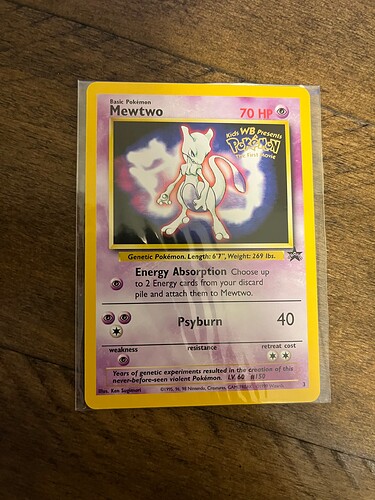 Do not be alarmed if your tape is not exactly the same as other pieces of tape on other cards or in other photos. Pretty much no two pieces of tape are the same.

How do I find this card?
This card is very rare and you are very unlikely to find it on eBay and will need to import one. On top of that, it is a niche release that is easily confused for another extremely common card. Most Japanese collectors refer to this card as the “US Version” (which we will get in to later) and that makes it nearly impossible to search for specifically. You will need to do broad searches for Mewtwo promos and click through page after page of eye-numbing results until you see a suspicious candidate that may be the card you’re after.

Even though you can tell the two cards apart after a little bit of exposure, lighting and image quality makes it impossible to reliably identify the Japanese release from photos alone. The intact plastic packaging is the only way to consistently identify the correct card without obfuscation. Otherwise you are rolling the dice and may very well receive the original English card from a Japanese collector who also may not know the difference.

So if you see this card wrapped in plastic, that’s your card. Buy it.

Mewtwo Strikes Back Kanzenban / US Edition
Mewtwo Strikes Back, the first Pokémon movie, was released theatrically in Japan in July 1998. It was followed by supplemental non-anime material, like an audio drama, that were part of the story but not depicted in the film. This sort of multimedia story content is common in Japan, but was not so in the United States. When it came time to localize and release the movie in the US, Warner Bros and 4Kids opted to shell out some cash to plus up the original film in various ways.

This did not stop the existing Japanese home media pipeline, however. The original theatrical release was released on VHS in February 1999, then Laser Disk in July 1999, and had over a year of being the only version of the film any Japanese fans were familiar with.

Before the US release, Warner Bros and 4Kids added some CG animated effects, recorded new music, and added 10 more minutes of animation based on the supplemental material. These significant changes became the standard international version of the film and it’s the one most people are familiar with. It was released in November 1999 not only in the United States but also on video in Japan.

This is where “the kanzenban” comes in.

A year and a half after its original Japanese theatrical release, the “US Version” of the movie was coming. While it was promoted in Japan as a kanzenban - which means something akin to a “complete edition” - it was also known and marketed as the American version of the movie. The American-ness of the new cut was only a focal point for its initial release in Japan, after which it became the de facto version of the film that has been featured in every subsequent release.

The VHS Tape
To coincide with the American premiere of the film, a VHS tape was released in Japan - the first release of the kanzenban. Since the kanzenban cut of the movie became a permanent update for all audiences worldwide, including a DVD release six months later, the “American-ness” of the original release is often overlooked. 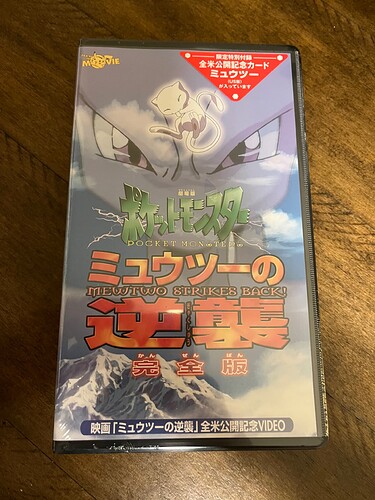 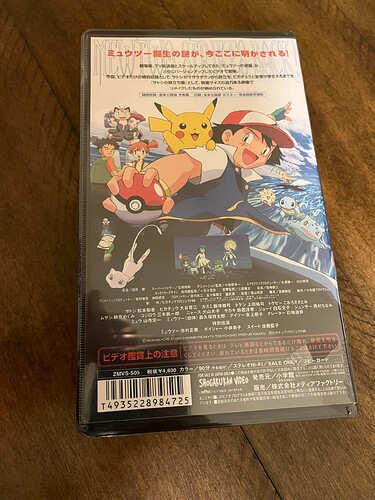 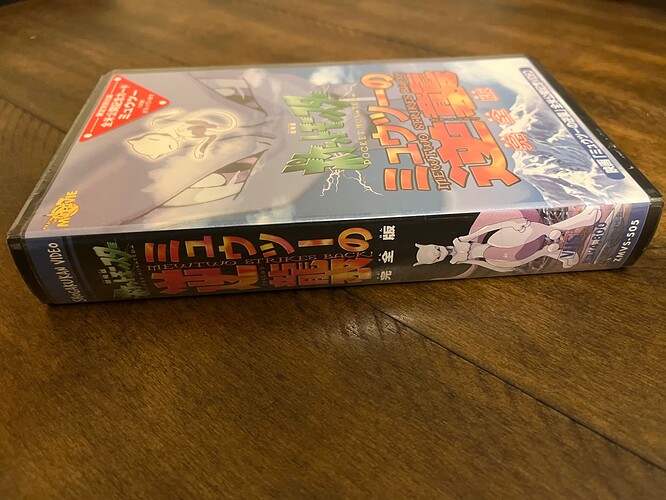 But this VHS was presented as, marketed as, and understood as the “American Version” of the movie. The banner on the bottom of the cover reads “Mewtwo Strikes Back US Commemorative Video” and, of course, it features our famous “US Version” Mewtwo promo. This card is advertised in the top right of the shrink wrap and reads “US Commemorative Card”. We can also see in promotional material documented by KEI that the print advertising for the movie emphasized that this was the US version of the movie not-yet released in Japan.

This print material comes from Trainers Magazine Volume 4. Thanks to HumanForScale for the scan! (Send some love to pokumon.com.) 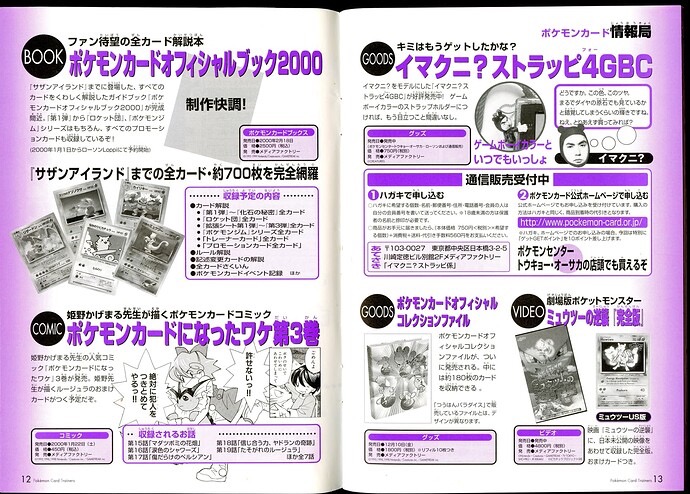 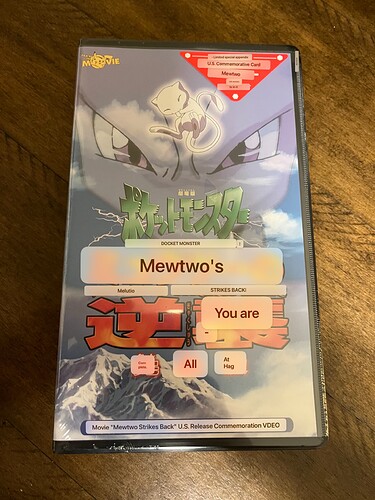 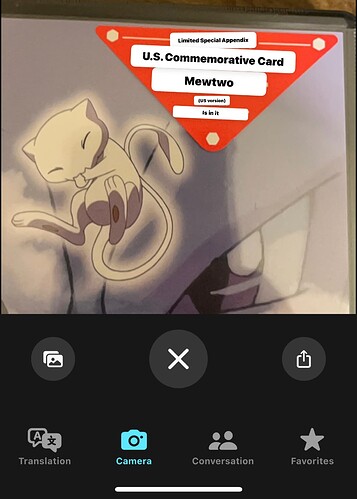 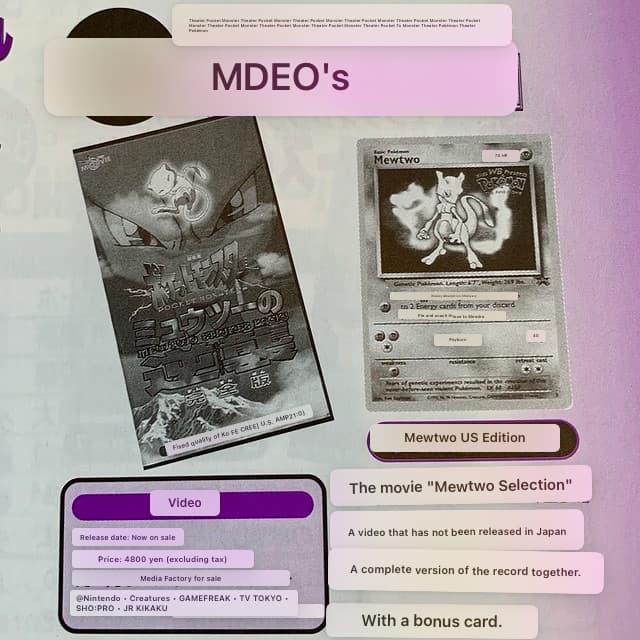 It also came with a folded poster for the American release of the movie. On the reverse are production sketches. 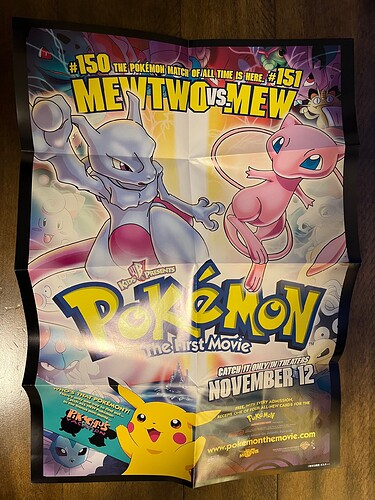 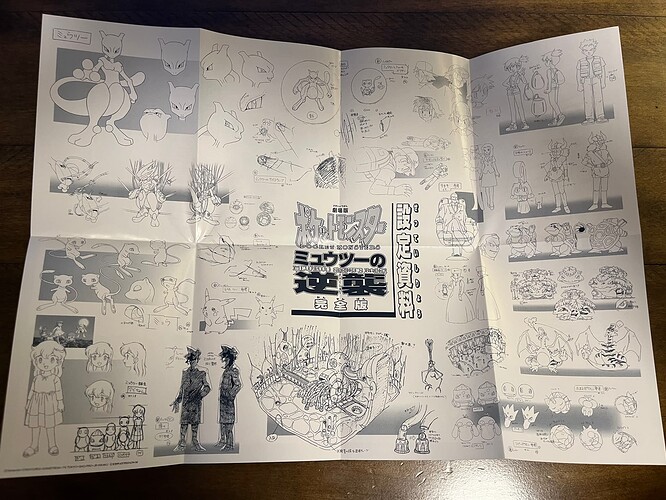 In June of 2000, the cut of the movie was released on DVD without any US-focused branding or promotion. This VHS release was a “commemorative event” printed in small quantities to tie-in to the international release of the movie for hardcore fans. This is why the Japanese English release of Mewtwo #3 is simply referred to as the “US Version” or “US Release” of the card in Japan. For them, it was. For us, it’s something else completely.

Other Japanese English Cards
While this print is rarely discussed, it is accompanied by many similar releases in this era where English cards were released in Japan for Japanese collectors.

Many of these cards have an obvious distinguishing feature. They are glossy or non-holo and aren’t difficult to identify from their proper English counterparts released in the United States. But Mewtwo #3 in this category lies between Base Set Pikachu (similar at a glance, but stands out on inspection) and Mewtwo #12 (extremely discreet differences). But I’d like to see this Mewtwo given the recognition it deserves in this category and get in the hands of more western collectors who take an interest in this stuff.

That was a good read, didn’t know this variant exist, very interesting.

I won’t buy one tho haha

It’s about the information more than anything else.

Im honestly just more surprised about an English release card in Japan. I hadn’t realized I’ve never seen ‘Japanese’ versions of these cards. Makes me wonder why there wasn’t localization to make them Japanese. And does that mean each of those cards were all English exclusive cards until a later Japanese release?

Similarly to how western children might find Japanese cards exotic and cool, many Japanese children felt the same way about English/American cards. So sometimes English cards were released to Japanese children as promos. That’s the case we have here. 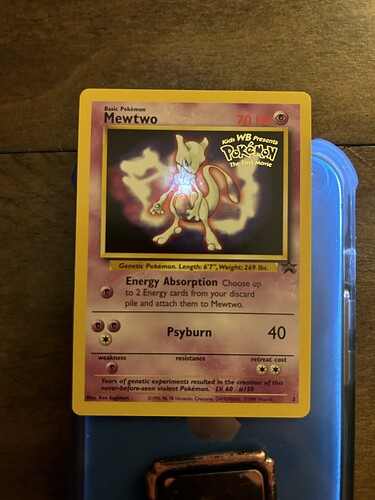 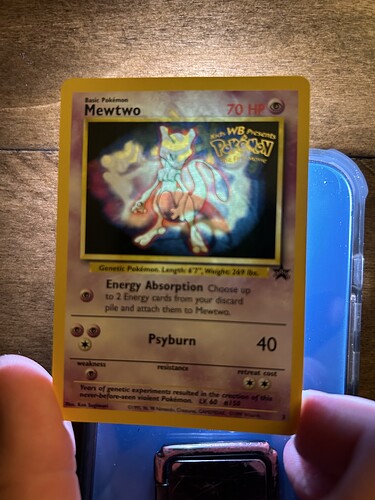 Credit to HumanForScale for suggesting this old fashioned test I’d overlooked for some time: the light bleed through the Japanese print is significantly greater than the standard release, providing another way to discern them.

This is great, thanks @stagecoach! Would you be able to hold the U.S. print at the same height as the Japanese print? Right now it is comparing slightly different light distributions (i.e., narrow and on the LED vs dispersed and slightly away from the LED).

I had to get it that close to show through pretty much at all on the US card. However I will take another photo when my wife has a minute — I need both our phones to take the photo.

I thought so! The black core layer would reduce any light from coming through on the U.S. print. Thanks for your scientific work!

Before stagecoach can get the official photo, here’s a quick comparison from me! 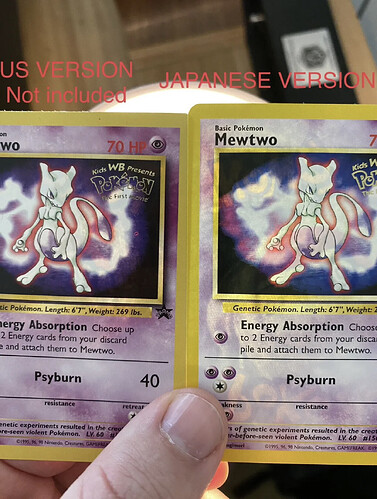 This is official enough for me!