I haven’t seen those either. Perhaps vertical double swirls can only be found at specific locations on the printing sheet. Lugia, Meganium, T18, etc. may not be in those zones.

Exactly what I was thinking. But that Golduck that you found leads me to believe anything is possible. Just gotta keep looking. It is gotta catch 'em all, amirite?

I’ve been postponing going through my collection for things like errors and miscuts etc for the longest time because there are a lot of cards but when I eventually do it I will also scan for double swirls.

I’ve been postponing going through my collection for things like errors and miscuts etc for the longest time because there are a lot of cards but when I eventually do it I will also scan for double swirls.

Great work here. Like you said, theres only a few of us really invested in double swirl cards. As far as 1st editions go, I’ve only seen the ones listed under the original post. I have a feeling there may be one or two more that have two swirls, but after looking at countless copies, I don’t think a full set is possible (I’m referring to the ones with close swirls by the way). That’s why I’ll be satisfied getting 9s of the ones that I know exist.

Partial double swirl for those looking to collect PSA 9s! 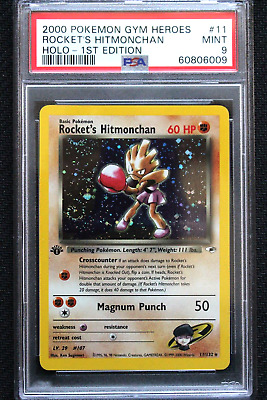 IF YOU DONT HAVE VIDEO PROOF THEN YOU UNDERSTAND YOUR CLAIM IS NOT VALID AND WILL BE DENIED.

I haven’t been paying attention to 1st edition and unlimited versions. Maybe I should but I’m still looking for different versions of the weld lines although it’s been ahwile since I done more research (have found 13 different versions of the weld line but only three of those actually make the lovely double swirl possible in the artworkbox)… also here is the nr. 18 Typhlosion. ^^ 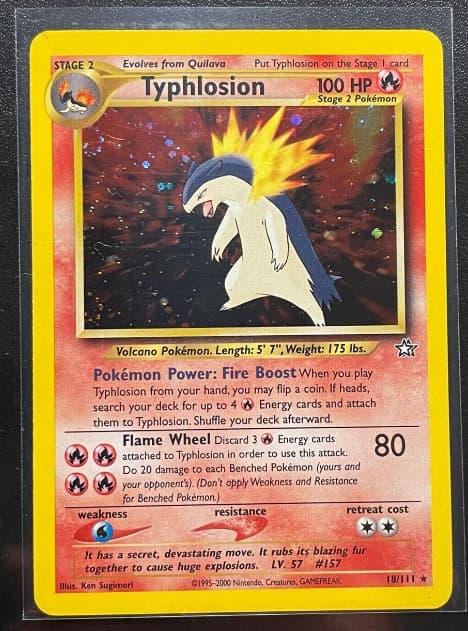 key part of the research is still the holo pattern direction and print locations I think. Nobody talks about it but I think understanding this can come up with allot more info then we think. will take time tho.

Depending on where the lighting comes from, there are not 1, but 2 great armpit swirls (or honestly it may just be one giant swirl that shows up differently under different lighting, based on the proximity it very well might just be one mega swirl). In any case, he is affectionately known as my Hairy Armpit Gengar 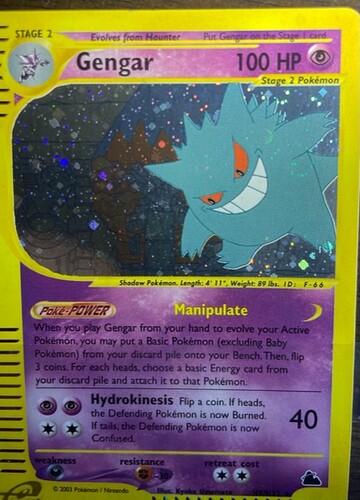 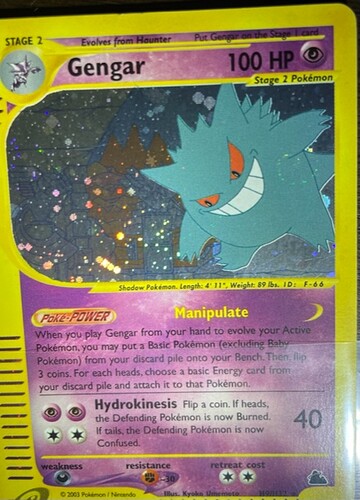 Ayy, so looks like both Meganiums are the only ones remaining for the starter evos. Neo is looking good 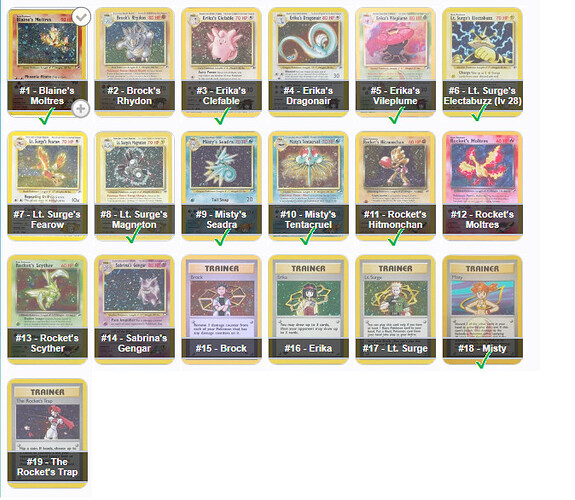 Gym heroes thus far. I’m pretty sure I saw a gengar but the swirls were barely visible. I passed and forgot to put the card on my eBay watchlist, so we’ll leave it off for now.

I know we’re not exactly spoiled for choice with these, but do you guys differentiate/have a preference between “pure swirls” and what I would describe as “cluster swirls” where the swirl is enriched, possibly from another layer, by a cluster of mini orbs? Some are deceptive because of angles but others are very stark. I know I own cards with both kinds, I shall have to compare them in detail, possibly two distinct types with variation due to overlapping layers as well, not entirely sure on the nomenclature.

Both are gorgeous, not sure which one I prefer, comparison between the “cluster” posted by @smokemon and a “pure” swirl I found on reddit through google (maybe the poster is in this thread?) 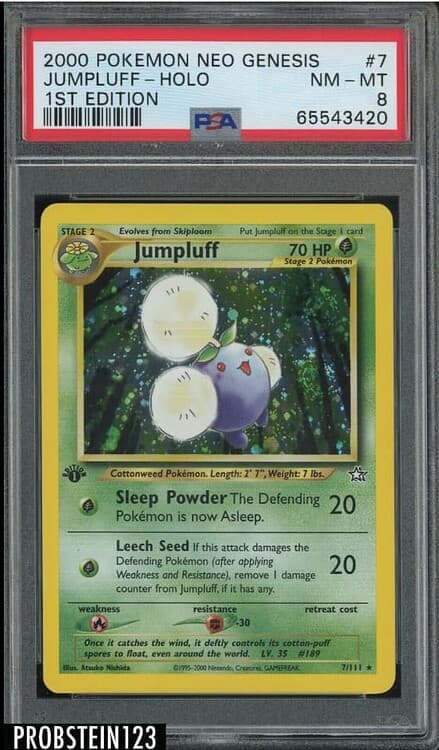 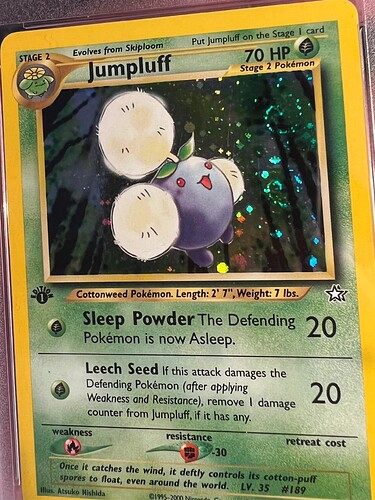 Hmm, I’m not sure that I understand the differences as you present them @c0ll3ct0r. Do you have additional pictures to describe the pure vs. cluster swirls? 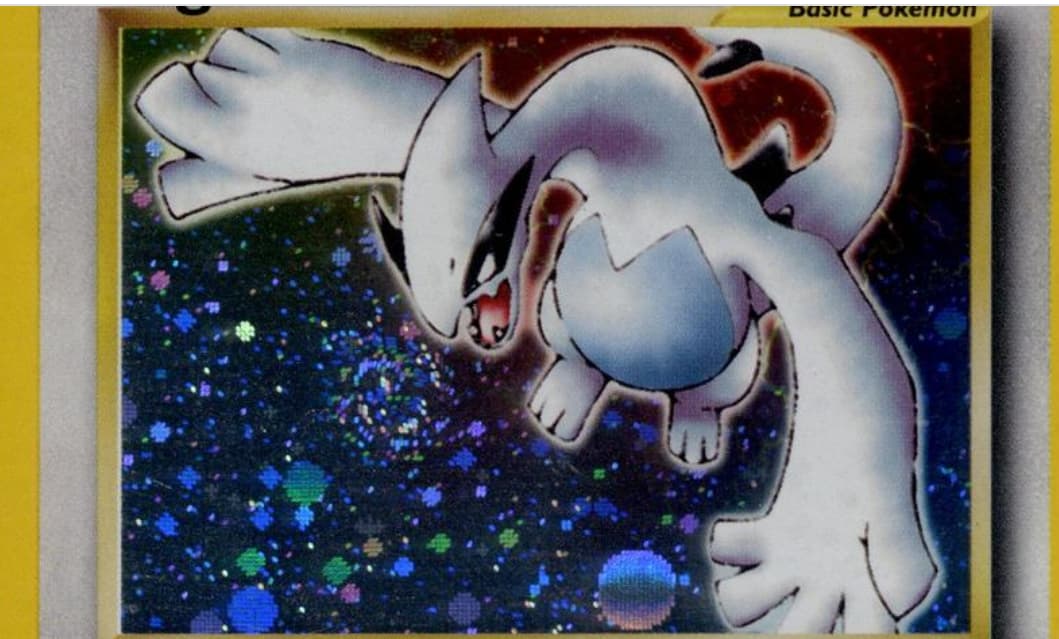 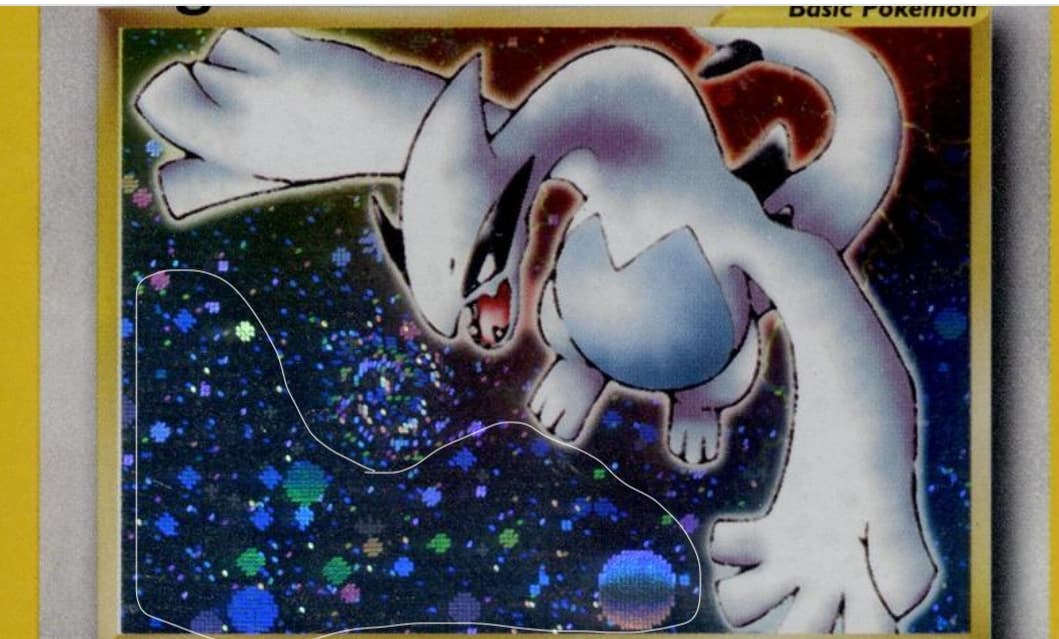 Are you referring to this portion beyond the swirl?

No I was thinking about the swirl itself, on the Lugia you can barely make it out because of the amount of stuff inside it, whereas on others it almost looks like a modern swirl, much more “naked” if that makes sense.

So this isn’t a double swirl either. Every card with a swirl can recreate this pattern under the right circumstances. This is the same swirl pattern lit from multiple directions concurrently that creates the phenomenon of a swirl within a swirl. As you can see, the “tail end” of the first swirl stops before the “tail end” of the second swirl. These are the main characteristics of every swirl: 1) when lit from one source of light, changing the angle of the card will change the placement of the …

It is solely due to the directionality of the light source. Every swirl can look like that.

Fascinating! So what you’re saying is that, beyond orientation, the makeup of the swirl is essentially the same? Or is that an unknown due to us not being sure about the layer thing?

On my cards I’ve never really captured that pure look all that often, but I rarely study the swirls on my cards in detail (that is going to change

) so it would make sense that I haven’t seen much of it. Online is a different story though, I’ve been surprised by it even so this makes a whole lot of sense of it.

Yes, the swirls are exactly the same! If you were to take pictures of your swirls underneath an “O-ring” light (or scanner), you would see the big cluster. As you know, rotating the card back and forth will make the swirl “move,” which is a function of the directionality of the light.

This is the thing, I rarely use good lights when looking at my cards, only “good enough.” I see the swirls change and contort into all kinds of wonderful shapes, but rarely that thin spaghetti string look. I’m guessing that particular reflection happens at an angle I should play more with.

In fact, come to think of it, the times I’ve seen it is usually when I tilt the card almost completely horizontally to the light source, when the holo becomes dimmer. I see that this is a repeating theme with the pictures I see online as well, the holo is usually dimmer when this particular shape appears.