My most recent sale has been sitting at their warehouse for 25+ days now with no updates. Customer service is useless.

I am not the only one that is voicing concern over massive delays recently, so just a PSA

Was this for a modern sealed product? Just curious as I’ve heard delays before with boxes. Odd they haven’t stated why.

I’ve had a few different sets go thru with no problems… this last time is after their alleged layoff spree. Perhaps they laid off their Pokemon authenticator because they weren’t selling enough to keep them around. Modern product seems to be the sweet spot [price wise] for what sells most on their site. I don’t know if I’ve seen many WOTC era items.

My experience selling on there has been pretty good (most items authed and paid out within a day or two of arriving), but I haven’t had to engage with customer service on anything yet. Fingers crossed that it stays that way.

Wowww! So after a month of waiting, they failed my order due to “inconsistent sealing”. . I just got my product back that they rejected.

The picture they sent of the box had a hole in the front of the seal, which I knew was not on anything I sent in. The box they sent back to me is not the same box as the picture they used as proof. The pokeball logos aren’t even in the same place.

They are straight up lying. I figure the buyer filed a chargeback after waiting a month with no updates, so they failed me to save their own tail. Best case scenario they used a photo from a different sale, and sent me back my perfect box. Which is now damaged because they shipped them with improper packing.

Nice timing on the update. I just got my first “failed authentication” due to a ripped seal after ~50 sales. Will see what the box looks like when I get it back.

Good to know. I had never had a failed sale either. Did they include a photo in your failure email?

Video record opening the box and see if it matches the photo.

They did include a photo. Definitely looked different than when I packaged it but I’m willing to give them the benefit of the doubt that something may have happened in shipping (or they just sliced it when opening lol). Will update once I’ve got it back.

Will be interested to see what they send you. I think they sent me my original box back, but the box they sent back to me does not have holes in it as they claimed and is visible in the picture they used.

Maybe the buyer filed a return and sent back a different box? Seems like a long time to settle an “authentication” issue otherwise

I would have gotten paid out before they ever shipped the buyer my box. I never got paid out because it sat around and didn’t get authenticated for almost a month. Typically I got authenticated and paid out in a few hours of StockX getting my order.

I’m pretty certain the box I got back was what I sent in. It’s just the photo they sent me of the failed box is not my box. The box I got back should not have failed, there is no inconsistency in the seal like they claimed and showed in the photo.

Weird. Yeah I guess I didn’t understand the situation accurately and my hypothesis definitely doesn’t hold up. The timing is really strange. I wonder if the buyer was in limbo too?

Buyers don’t get any more info than seller. Most of StockX Social media is just slammed with people PO’d right now.

I opened a case and will get to the bottom of whatever they’re trying to pull. It’s been moved to a specialist department, so I will keep everyone updated.

Re-seals are really plaguing the hobby right now. Considering their volume, they have to get hit with them and/or reverse scams.

This is disappointing to hear as StockX’s pitch was they would authenticate product. Denying product based on a tear in the wrap is not that. We really need a sealed authenticator.

Agreed, hopefully someone steps up.

The hole they pictures wasn’t even a tear, it was a clear minor manufacture QC issue…

But again, the box they sent back to me didn’t even have that hole or ANY defect in the seal (as they claimed in the picture). So they just used that excuse and a fake photo as a way to rescind my sale for whatever real reason we may never know.

I just don’t think the margins are worth it for anyone to take on the risk. I’m amazed that StockX even offers this service as they only make a couple bucks on each modern box transaction, which doesn’t seem worth the labor and overhead costs to operate at all (even before accounting for any customer-facing issues).

Alright fellas this is the kind of customer service we are dealing with here. How do you even respond to junk like this? 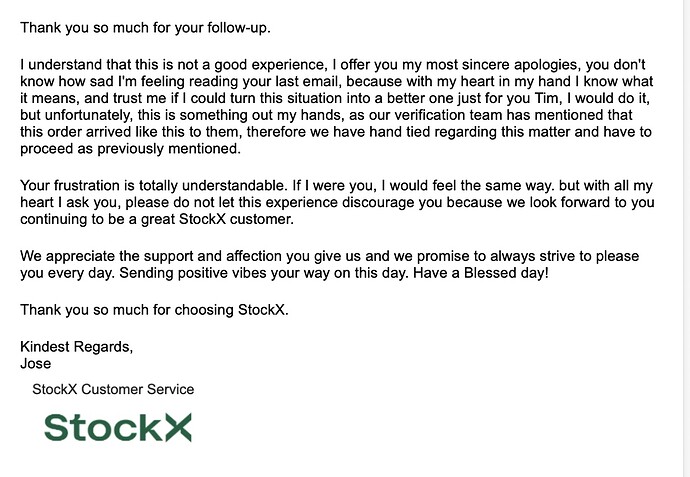 I went from a very personalized conversation on live chat support, where they requested images and we all got on the same page about what was going on, to being told they needed to escalate to a special department and I would receive an email within 2 business days. This is what I get?

Let me note that at this point I don’t care about the dollar amount or continued time lost with this transaction. I am more devoted to getting to the bottom of this because of the gaslighting they are trying to pull. I can not stand when a company acts like this.

All that blah blah blah to let you know that everything you’ve been asking in previous emails was out of this reps hands?

Sorry to hear you’re going through this.

The draw to StockX was that they eliminated the possibility of getting scammed out of authentic product. But now, it seems you have to worry just as much about StockX scamming you.

They are clearly going thru economic/cash flow issues, obvious by massive layoffs creating huge delays, But I think they no longer have the capital to front chargebacks so they pass all the responsibility on to the seller.

As Cuban would say- “for that reason, I’m out.”