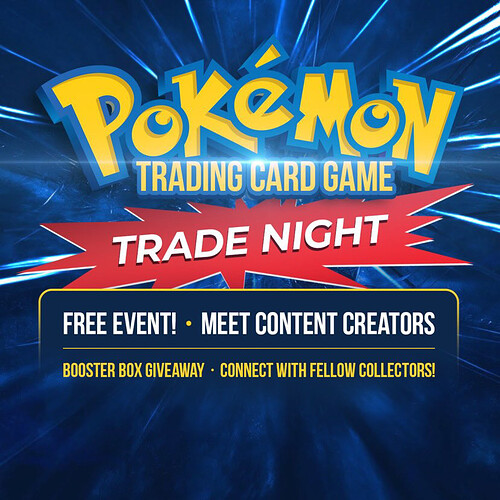 Attention New England Collectors!
DanTCG (On IG), @Pokenomics_, and I are hosting our first ever FREE Trade Night on October 1st at Let’s Play Collectibles & Things in Hooksett, NH (1134 Hooksett Rd.) from 1:00 PM to 6:00 PM.

If there’s anyone from the area, come stop-by for an afternoon full of Pokemon Talk, Trades, Giveaways, Door Prizes, and More!

This will be our first Trade Night Event; but, we would LOVE to turn this into a more semi-regular event if there’s enough interest because right now, there’s really nothing for us Pokemon Collectors in the New England Area

I will be there!

If anyone wants to work out the details of a higher end deal beforehand dm me! not sure if there is a place to show off what inventory you plan on bringing

While I’m too far away to attend, it’s great to see this type of event and community building!

Only a little more than an hour from me. Hmm. I’ve driven further for chicken fingers in Manchester.

I’ve actually never in my life gone to an in-person collecting event. I don’t even know what to expect.

I’ve been getting a lot of IG Messages from people interested in going; so, hopefully there’s a good turnout! But, I haven’t heard too much on what people are actually planning to bring with them. Personally, I’m planning to bring a bit of everything from low-end to higher-end: Singles, Slabs, Modern Boxes, WotC Heavy / Light Packs…

If you can drive further for chicken fingers, you could definitely make the trip for this! Haha

There’s been a lot of people who have messaged me on IG saying that they were interested in coming; but, it’s so hard to know what kind of turnout we’ll actually get given it’s our first time hosting an event like this! Hoping for a decent turnout!

The purchases / trades at these in-person events are definitely fun; but, the biggest thing for me is always just hanging-out and talking Pokemon with different people.

Awesome and I hope to see it happen again so I can try sourcing deck products for my collection. Unfortunately cant make it due to distance and that I already have plans for that time.
Question for next time, if I consider myself an amateur collector who doesnt mind the lower end of the value pool and doesnt have much in the ways of high demand/value cards for trade, would it still be worth checking out? Havent been to a trade event so not sure what the level of collectors are for it.

Sounds like fun! A little too far north for me, but maybe next time!

I won’t be there for this one, but I’m coming back to the states in late December, if it does become a regular event, I’ll definitely join in!

Stuff like this make me jelly because I wanna go but it’s just a bit too far away. I need something like this is NY, CT or NJ. Hope everyone has fun!

I so want to make it to this! Not sure if I’ll be able to make the 4 hour drive this time around without better planning, but I’ll keep an eager eye on this for the future!

TBH, I’m not really sure what to expect either given that this is our first time hosting a Trade Night. It’s sounding like we’ll have a decent turnout from the messages that I’ve been getting thus far; but, we really won’t know until day of Trade Night. And, same goes for what’s actually going to be there. Personally, I’m going to bring a bit of everything: low-end to higher-end and I imagine that’ll probably be the case for most people; but, really not sure. We’ll definitely have a better idea on that if this first event turns-out to be successful and we continue these on a semi-regular basis.

would love to go since I’m from MA. Unfortunately, I’m working on weekend

Very cool. Anyone know of anything like this in the LA/Phoenix/Vegas area?

This sounds awesome. I plan to go!

Who wants to share what they’re bringing to this? I’ve been on a signed card kick and may be looking to make deals for those.

I dont have any signatures, but Ill try to take some pics of slabs that I plan to bring later. I also have random sealed things I may bring but Im not sure yet.

I am still looking for an ex era booster box if anyone going has something they’d like to discuss as well as a BGS 8.5 1st ed charizard and a few other things. Ik its a long shot but, sealed product is much better to buy/trade for in person.

I’m also interested what people might be bringing because I feel like I have nothing to bring. I don’t really keep “extra” stuff and keep my collection pretty lean but don’t want to show up empty handed.

I don’t have any “extra stuff” either. Everything I buy is stuff I don’t intend to sell anytime soon. I’m going to bring a bunch of stuff anyway and be open to all possibilities. You never know how seeing other peoples collections and Pokémon conversations will open new doors. This is my first one of these and if anyone has any tips of what to expect I’d be appreciative.