I feel this topic needs to be its own separate topic as it is mostly gets buried.
As PSA is clearing up their old backlog and $30 value tier hitting “assembly”.
Just want to see if there are other fellow members who has outstanding orders as well from Ludkins USA (pre March 2021)

Personal disclosure, I have 3 Bulk + 1 Economy subs, totaling over 1100 cards that were submitted between Dec 2020 to Feb 2021. Currently they are showing “Grading” in the Ludkins tracker.

There are many members, myself included in the same boat. I have a couple orders from early 2021 that are still in “grading”. Middlemen tiers are not the same as retail. Whatever the $30 or even recent $18 tier are doing isn’t relevant to a ludkins/middleman order. They just aren’t prioritized.

I feel this topic needs to be its own separate topic as it is mostly gets buried.

Just wanted to say that I strongly encourage anyone to do this if they want to have a more focused discussion about something being talked about in a megathread. It will help flesh out a specific topic and is also helpful with respect to optimizing the results from the built-in search feature on the site. This thread is a great example of something that would benefit from a dedicated topic.

Outside of this meta-point, it’s pretty crazy to think that cards from 2020 are still sitting at PSA especially when new orders are being turned around relatively quickly

We don’t have a tracker but a Google document stating how many of the shipments (each shipmentincludes many orders) have been graded. It has been stuck on 60/88 for a long time now.

Frustrating to be in those 28 shipments, especially as PSA seems to be going through their backlog quite fast.

On the positive side, the upcharges will be a lot less compared to when I send it in, lol.

I have three orders still at Ludkins from:

I have an order from October 2020 that had an upcharge over two months ago, and been in QA2 since about then. Peter from Ludkins has not been able to provide any updates when I asked.

I assume I’ll get it back by September which is when PSA says they’ll be done with the backlog but who knows. Pretty sure they just threw all the middle man orders in a black hole two years ago

I have four orders from February 2nd to March 8th with them. All in “grading”.

Honestly, I’m just glad I made an effort to send all my gradable cards to PSA during that time because I kinda anticipated either a shutdown or a price increase, both of which happened. All those cards in my orders are $10 and under pricing.

I was only left with a handful of cards I had to send to CGC (which I lost money on) and a few I had to save for the $30 dollar tier.

I have two small orders out with Ludkins USA right now.

Will be curious to see if they start returning $30 tier value before they finish the middleman orders. Wouldn’t be surprised if they continue to ignore these unfortunately

Although the backlog cards are generally in the $10 tier, PSA is paying for storage facilities to house all these extra cards. I’d think they would want to eliminate that overhead charge and move on.

I’m all for that trust me…I feel terrible that my personal orders from 2021 have been completed while these folks are still waiting for orders from 2020. Hope they do the right thing

Still waiting on one order from December 2020, been in QA Check 2 for the last few months. Really pretty horrible how PSA has screwed middleman orders in the backlog.

I’m pretty sure someone will get the special $ 18 per card back sooner than Gradedgem / Ludkins.

I don’t currently have a middleman sub out, but I did a while ago. It started becoming pretty clear that they weren’t prioritizing middleman orders - I was getting back personal subs first that were sent months after the middleman subs.

My theory at the time was that they were using it as a bit of a loophole to “misrepresent” their statistics. By choosing to separate middleman orders from regular submissions they were able to make big sweeping statements about the state of the backlog, none of which included middleman orders. CTD for example only included normal tiers and didn’t even imply that middleman orders existed.

This screenshot below is an example. Yes, regular tier backlog was processed by then. Middleman’s version of “regular” (same price and turnaround time) were definitely not processed. So yeah, they’re not outright lying, but by doing this they are able to make these great backlog progress statements while still having middleman subs from 2020. 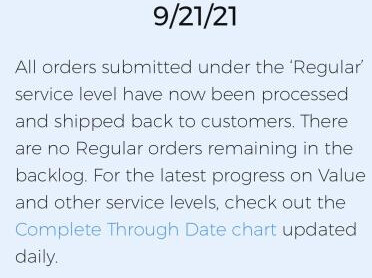 It’s going to be hard for me to submit through a middle man service again after seeing how PSA threw them aside. No fault of Ludkins as far as I’m aware but submitting directly is what I’ll be doing for the next year at least. Maybe that was part of their strategy to prioritize member orders which will inevitably create more members. I could be wrong though.

Maybe someone with a better understanding of PSA’s process could explain why what I’m about to say is wrong. The only thing I can think of is maybe their eventual goal would be to have a more “official” middleman, kinda like what they did with Ludkins by making them PSA UK.

Wouldn’t it make sense for PSA to encourage middlemen? I feel like it would greatly reduce PSA’s logistical issues and increase the speed that they’re able to turnaround cards, saving money in the process.

I have an idea to explain the reason for this.
Since I’m not good with words, I’ll use an example.
Let’s assume PSA has 1000 graders. 100 of them look after “middleman / dealers”. 20 of them grade just Ludkins. This number does not increase, no matter if the other 900 graders have finished grading, they will not help these 100 graders. In fact they will start grading new orders! Of these 20 graders, probably 1 grader grades the express order, 2-3 Regular and the remaining bulk !. So if you were paying express from Ludkins, you would queue for that grader who grades express only Ludkins and not the group of direct submission.
When PSA intended to clear the backlog by September, he meant that the normal 900 graders will finish their work not the middleman group. It’s already August, and people still not receive back the cards from Nov 2020, PSA also said the February and March 2021 submission were tripled or something like that, if I remember correctly.
This is my theory.

Yeah, regardless of how they work it all out, it’s clear that middleman orders aren’t prioritized in one way or another. My point is, they aren’t even really publicly acknowledged. For example, they said that they $30 Value tier wouldn’t be processed until the backlog was cleared. 0% chance they’re including the middleman subs in the term backlog. It’s intentionally misleading, they’re omitting hundreds of thousands of cards from their statistics on a technicality that they’re not retail tiers.

They like munniez and they start grading what makes them the most (so dealer last), that’s my theory. 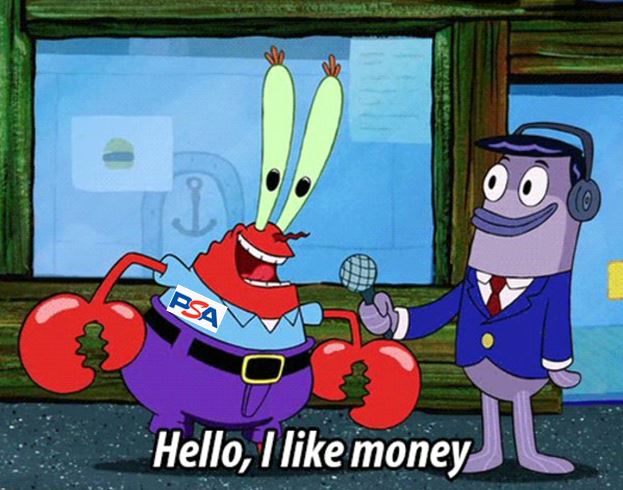