Has anyone ever seen a WOTC black star promo Dark Persian (HP error) that is still sealed/stuck to the Nintendo power magazine flyer. Wondering if the HP error version ever existed on it. I’m not sure how long it took for it to become a known error as a card. So it seems if they ever did exist on the flyer they would have been peeled off first and then fussed about later when people discovered the error. Just wondering if anyone has info or any experiences. Thanks!

flyer in question looked like this, but talking about the HP error being stuck to it instead: 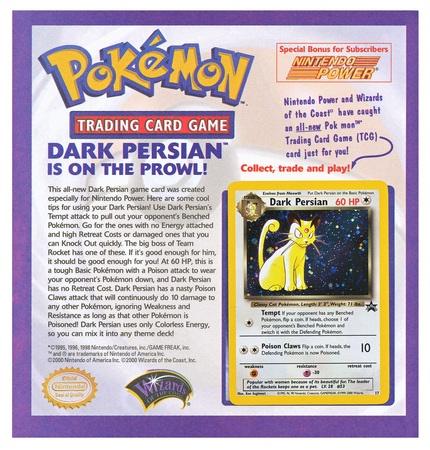 I owned one briefly but I ended up selling it because I was concerned with how easy it would be to construct a fake one. You could easily mount the error card onto the paper insert to create the illusion of the originally mounted error. I do not know if mine was authentic or not.

To my knowledge this card was never redistributed any other way so there is nowhere else it could have come from unless they were leaked factory misprints, which based on the volume of the error seems unlikely.

From what I understand, the error would have been placed on the sheet just like the non error. However, I have not seen one to confirm.

You are correct to speculate that it can easily be attached, so the paper included should be treated as no more than a novelty. I personally took a normal persian off the paper, sleeved it and then placed it back on for framing to provide extra protection. If I ever did see one with the error, I would take it with a grain of salt.