Call of Legends in Collecting...A lost Gem or just lost??

Hi everyone! I hope you are all doing well.

I have been recently looking into Call of Legends. Mainly because it is a stand alone expansion built as the bridge to the BW era, and due to the beautiful shiny versions of the legendary Pokemon included (Gen I - III), plus the fact that it is a set which includes exclusive artwork for some English cards (no japanese versions).

When this set was launched, back in 2011, I was not paying much attention to it, but from what I have been reading, it was not very popular. However, looking at it, the set checks a lot of the points for a good collectible.

How do you see this set in the future? Growing popularity? Forgotten? Another shinny hunt?

The set is not really forgotten, I would say more overlooked, to be frank, they’re better sets out in regards to it’s collectability, however it’s starting from a very low base of collectors, therefore I guess you could say it’s only going to grow,

I wouldn’t look to throwing your warchest at it though, I just saw the COL Groudon PSA 10 go for $250, that is ridiculous when you compare it to other cards that go for that price range,

Great artwork in this set overall. I strongly associate it with Legendary Collection which means good things.
Lots of potential I’d say. It’s already gained a lot more attention since its release.

@gradedgroudon Indeed the shinny variants will always push the limits $, and there will always be people willing to attain those cards…However with the growing awareness of the set, more copies in PSA 10 might appear driving the prices down a bit… I mean, the product is relatively recent, and there should be plenty available in the secondary market.

(I can’t tag GradedGroudon with the @

@raichuforyou Do you make that connection because it was only printed in English and it was a transition set between eras, just like Call of Legends?

The price of the shinies exploded in the past year. It’s surprisingly difficult to find truly NM/M copies of them period, let alone at reasonable prices. I can definitely see the Lugia and Ho-Oh in particular continue to climb.

I think this set is a lost gem, or at least the shinies are as they are beautiful, unique, and not released in other sets. The set didn’t get much attention back in the day when it was released as most of the cards in the set were just reprints from the earlier HGSS sets.

People didn’t like the set much because the shinies weren’t really playable and the set didn’t bring much for the TCG in general. I remember that well as I used to go to TCG tournaments when the set was new and everyone was just kinda criticizing the set for being rather useless and being just a filler set until Black & White came… Some people collected the shinies as players gave them away quite easily, they weren’t worth very much. In general I think the whole HGSS era has been struggling to get attention. I wasn’t personally a huge fan of Prime cards at the time but I’ve started to appreciate them more now years later.

Some noting points are that, its the first appearance of shiny variants of Lugia, Ho-oh, Deoxys, Dialga and Palkia. Surprised the first three didnt get gold stars during the ex Series

It’s an awesome set. I love it personally, and the shinies just top it off. But i doubt itll ever see the type of popularity of others sets, or of later shinies.

Its very hard to predict with unpopular sets going forward into the future. Who knows, maybe a youtuber would open a box and said something like, ‘holy mother duck, this is like the best shiny card ever. I can guarantee this set will go up in value in the future so get one now!’ BOOM! Instant spike. Its impossible to predict future values of unpopular sets so only get them if you genuinely like them.

Call of Legends I believe is starting to get a lot more attention and seeing a gradual price increase mainly for the SL legendaries. I’ve been watching the prices of the SL legendaries as I still need to add quite a few to my collection and have seen them go up in price over time. I see a lot more people recently purchasing the cards and some even hoarding the cards.
I believe every set has it’s turning point from “no one cares” to “best set ever!” (I mean, probably excluding Emerging Powers), when people finally find something unique in that set, and this set has that possibility in my opinion.
Personally though, I believe you should complete sets based more on if you personally enjoy the set rather than purely money relate reasons. I’m collecting EX Dragon, which does have two expensive cards, but value of a set has never motivated me to finish it. That’s just a personal opinion as I’m not a seller, but a heavy buyer.
Also, Call of Legends has a lot of great cards beyond the SL legabdaries! In my opinion, the holos are really lovely in this set.
So, in summary, if you personally enjoy the set, collect it!

I think Call of Legends is an EXCELLENT set. It hits so many points it’s crazy. The Shiny Legendaries are very collectible as their own little subset. The holos are (I believe) mostly/all reprints of cards from the HeartGold/SoulSilver, Undaunted, Triumphant, and Unleashed, but all with unique artworks that were not in Japanese. This set actually has no Japanese equivalent as I understand it, the shinies were promos for a league or something. The energy cards are hands down the best energy cards for blinging out a deck (okay that’s an opinion, but come on they’re excellent). On top of all of this, it also has a lot of the main species-specific collectors’ strong points. It has Eeveeluitions, Legendaries, and Starters. 10/10 set, wish I had put more into it when it first came out. I don’t know why I glanced over it. I really got into Triumphant as well as the early Black and White sets, but pretty much missed this one. Out of the few packs I opened, I got 3 Houndoom holos and the Palkia as my only SL. (:

Thank you all for your comments on it! It is really nice to see the community come together

I also feel that Call of Legends has tremendous potential for collectibility, as I said before it ticks all my tags… I think I will slowly start building the set, since is not my first goal and I don’t want to deviate from it…maybe get some packs to open and then finishing off with purchasing singles…we see!

@raichuforyou Do you make that connection because it was only printed in English and it was a transition set between eras, just like Call of Legends?

Exactly that! haha Similar name etc
It’s just a cool way to end an era in the TCG. I guess the Black & White equivalent would be Legendary Treasures? I’m not too familiar with the newer expansions.
Anyway, I can see the SL cards having growth potential in the coming years. So there’s that…

Call of Legends is a great set! The HeartGold ans SoulSilver era was when I got back into collecting! I had so much fun collecting those cards.

My advice is to collect the set NOW before it becomes too popular otherwise your going to have a hard time!

Anyone have any current thoughts on the Call of Legends SL (shining legends) subset, especially after seeing the hype for the 2017 Shining Legends set?

The CoL SL cards picked up in popularity in a BIG way last Sping/early Summer and was actually quite overhyped…you had tons of people just hoarding and sending SL cards into PSA en masse, it was all over FB/IG, etc…eBay prices started to skyrocket for ungraded nm-m cards and, at the moment, it’s extremely difficult finding truly mint ungraded copies of some cards (Lugia, Ho-Oh, Ray, etc) and when they do pop up the cost is usually around $80-120…

That said, the SL subset managed to somehow remain low pops for PSA 10 for all 11 cards: 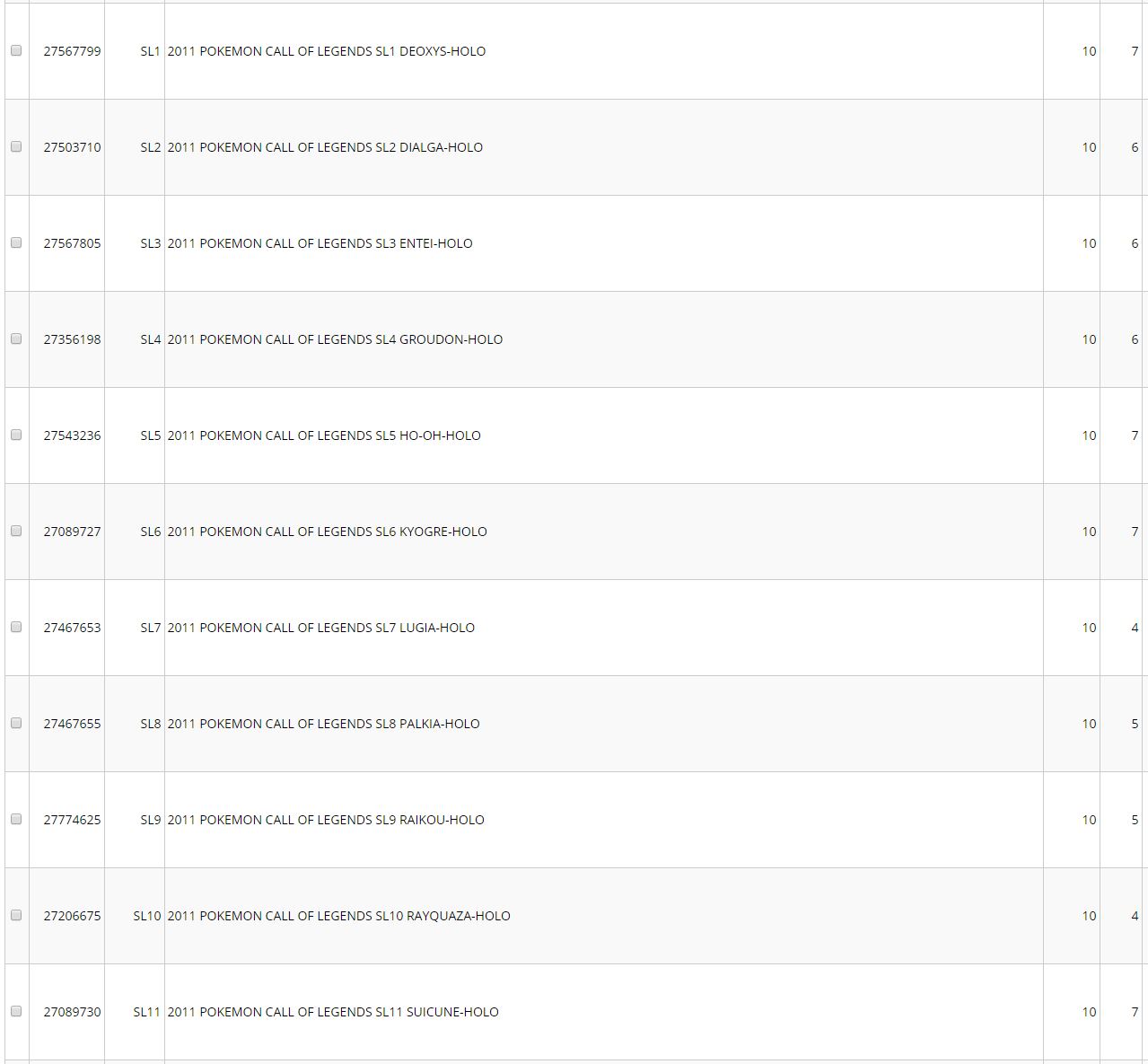 So, it looks like after the initial hype died down when this subset was being ‘rediscovered’ the POPs still managed to remain low, and if you look at a majority of the SL cards PSA is definitely not giving out 10s easily (these are quite hard to grade in 10).

I’ll touch again on some of the main points about the SL cards that were brought up in this thread:

Don’t get it twisted, this set will never touch Gold Star/Neo Shining status…but even after the short period of overhype, this set continues to still be underappreciated/overlooked but imo is just extremely collectible…i’ve gotten some crazy interest on my SL sets on IG and curious what other E4 folks think.

The HGSS sets go shamefully forgotten, I’ve gotta say. The only sets that rival the HeartGold/SoulSilver sets are the original Gen 2 Johto artworks from all 4 Neo sets. This period of time during late Gen 4 is unfortunately the only period of time in the TCG where I was 100% out of the hobby and didn’t buy a single pack or box in 16+ years of being a Pokemon fan.

Call of Legends is such an awesome set and I never got to open any of it to this day.

Ive been heavily focusing on CoL SL lately. Have 4 of them in PSA 10 and the rest are currently getting graded. I want to finish the set ASAP since I believe all of the SL will be $350+ soon in 10s.