2 Weeks grading at PSA, with Goldin

link: Goldin
Similar to PWCC’s grading scheme, you don’t have to pay until it’s sold on their weekly auction. Have anyone tried this? Thoughts? 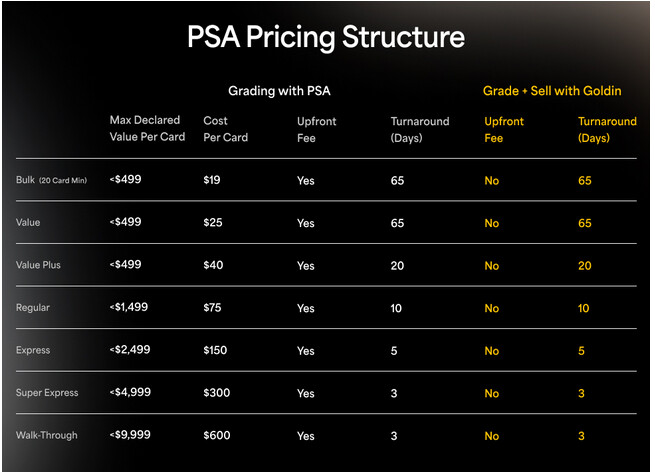 The battle lines have been drawn.

We still haven’t seen anything close to PWCC’s auction format on the eBay platform.

eBay’s platform and exposure > everything else

I don’t know about you guys but it’s hard for me to take a website seriously when they can’t spell “receives” correctly. I would think they would have someone spell check the website, especially when it’s in a giant table comparing their selling points

I felt this deep in my soul.

Looks like that “two week grading” is just PR bullshit as you have to submit at what I can only assume is the Value Plus tier (Economy doesn’t exist anymore at PSA). It doesn’t appear that Goldin offers any faster turnaround times if you submit to sell via their service as opposed to sending direct to PSA.

I guess the only benefit is no upfront cost.

I was wondering that too. How does a 65 day bulk submission turn into a 2 week submission?

Seems like they have yet to update their website to represent the new tiers that PSA launched in January. I would guess value plus gives 2 weeks turnaround time, but who knows. Would be interested to know if anyone plan to use this service, and be willing to share feedback on it, down the line. Thanks for the input guys

Would be really interesting to see how the competition, will be VS Ebay down the line, hopefully all this competition will improve and expand on the choices, we have for our cards.

I was looking at their website again and they have an option to return to your address after grading, which means they act solely as a grading middleman…

Yikes, Goldin will get you about 60% of eBay last sold

I’ve bought two cards off Goldin in the last few months (Yu-Gi-Oh) and definitely got them for about 50% of what they were going for on ebay. The awareness just isn’t there yet, same for comics, that gap will fill soon imo.