I never really thought about this topic and seeing the first video in the thread did get me worried a bit. Now I have seen some videos of Kurt’s card care youtube channel (thx for the link @philzcardz ) and I feel less stressed now lol.

The big difference is that Kurt shows his methods so we can see what is going on and the German’s don’t so people’s mind’s tend to go crazy I think. They might just do the same like Kurt but because of their shady advertising it looks they are doing allot more to the cards that might have consequences later on because we don’t know what they do. Either way, I hope I won’t buy these cleaned cards without knowing it but just like @pfm said, it’s something people probably will get used to down the line. And who knows, people might have been doing it for years already. Still happy to have been made aware of this topic. 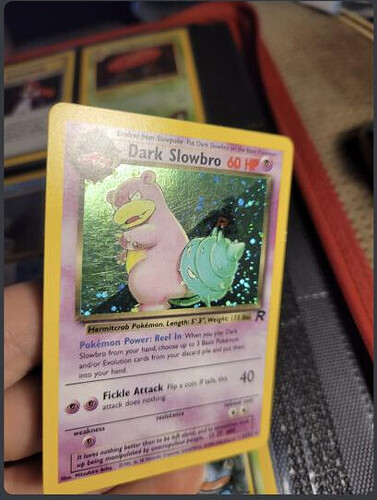 Is that using the scratch remover stuff mentioned above? Does the cleaned part look or feel any different?

I wonder how prevalent this will actually become? Correct me if I’m wrong, but it sounds like this cleaning just removes holo scratches. Whitening and centering are typically the most common condition issues. Sure sets like neo gen have notorious holo lines, but I just don’t know how many cards will bump that much from removing scratches.

Also I doubt most people are even aware of these services or will use them. Where something like pack weighing affects every single pack.

Yeah I think this will eventually become widely accepted and a lot of people/services are definitely going to do this. On one hand, maybe a better method comes out that doesn’t make the holo look off. It also wouldn’t be horrible for someone who wants an expensive card but can only afford a beat up version. Restore it to look fairly good and throw it in a binder and save a good chunk of money. Can’t blame them for trying.

The main problem I see is people doing this to flip cards as LP/NM. Could really mess with things in the future. 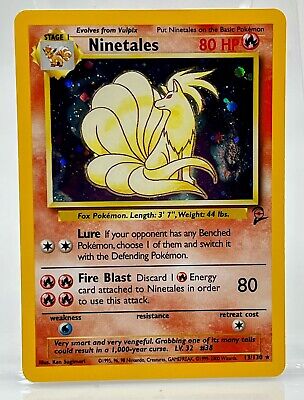 Vintage Ninetales in pretty remarkable condition. Please request additional photos if needed. We are not representing this as a graded card. We may miss something that is important to you. Shipped securely with Top Loader Our goal is to...

and when I think about it, one of my goals is to learn to recognize Belgium printed cards and one key thing for that is gloss. If everyone is adding gloss to all cards I can forget about my goal lol.

Yes. I’d assume it would add a texture similar to how the PlastX adds a harder/squeakier finish to the slabs when you use it.

I think some of us here could tell the difference if it had been done to a card, but for many, yeah… how do you detect it…?

As scott mentioned, it won’t remove scratches in the print on the card. If the holo has scratches, the rest of the card usually does, and that’s not going to save the grade. Might be nice for some binder collections though…

In the art world, restorations are a thing. So, I also wonder, if the shine of the holo is the only thing being “restored”, perhaps it’s not so bad… (?) IDK.

The thing that bothers me is that the altered cards are so shiny and reflective, they don’t feel real anymore. Indeed in the art world paintings get restored but what they do is not restauration, for me it looks like they are trying to make it look better then it originally was. I’m not talking about condition here but I mean how the card looks and feels. I like Pokémon cards because they are made from cardboard, if they look like they where made from plastic then my interest would be allot different. Once they start “cleaning” some cards that are very old and make them look like brand new or better then that feeling of a very old and fragile card is gone and age is actually the thing that is most valuable of all. Anyways that’s what I think right now and we will see what the future brings.

In one of Rattle’s videos he covers that one of these companies is buying PSA 9s, cracking them, applying the “treatment”, then resubbing and getting PSA 10s and selling them for a profit

Also some of the followers include efour moderators. I’m not saying the moderators are aware of it or intentionally following these people, but it’s happening right before our eyes.

If it is detectable, then maybe the solution for altered cards would be no grade - authentication only.

PSA would likely categorize this type of alteration as restoration (N2) and give the dreaded “No Grade” label.

The “No Grade” term is used when an item cannot be graded by PSA for a variety of reasons. For example, PSA will not grade items that bear evidence of trimming (N1), restoration (N2), recoloration (N3), questionable authenticity (N4), altered stock (N5) or cleaning (N7). In the event that PSA rejects an item for any of these reasons, it will be returned not encapsulated, however the full grading price is still charged, as the determination to reject a card requires review by PSA’s authenticators and graders. PSA will also not grade items that do not meet the minimum size requirement (N6), were miscut by the manufacturer (N8), or items we do not grade due to being an obscure issue or not fitting in our holders (N9). Items that receive N6, N8 or N9 results will not be charged grading.

If you think people with a specific skill set have not moved over to the Pokemon hobby and some of the high grade cards in holders have not been altered, you are existing in blissful ignorance. Grading is an imperfect art - it is meant to catch more than not.

I use distilled water and microfiber cloths and have found this does not damage the cards and easily gets dirt and surface junk off. I wouldn’t be surprised if some of the high end cards I’ve sold with minor surfaces scratches, but otherwise perfect edges, corners, and surfaces have been cracked out and had these substances used.

I wonder what would happen if someone specifically sent an order through to a TPG that had these substances used, approached them afterwards with before/afters, and disclosed it to find our their opinion on acceptability… What the end result would be?

If someone is selling these substances publicly, how many people are actually using them? Probably a lot.

Honestly, might be a hot take, but so long as the overall integrity of the foil isn’t compromised and the card can sit in my binder for ages and not get screwed up due to the chemicals, I’m all in for this. Not for grading purposes, but I’d love to spruce up some of binder cards.

I’m just curious if these processes have been tested over time to see what happens to the card. For example I wouldn’t want it to start some kind of slow oxidation process on the foil sheets or something and wake up to my PSA 10 card being green due to it.

Like covering it in packing tape or lamination. I get you now. Yeah…