I don’t remember a time when another grading company changed their standards like cgc did recently. Also I think it’s the combo of a dramatic change plus gaslighting customers by saying nothing changed.

Eh PSA has been back and forth sometimes with more severe and a little more lax, im sure BGS is the same way, but this CGC was so apparent, even for people that don’t collect/search/submit for CGC. It went from never seeing gold in searches to just tons of them. Everyone talked about how they liked the strict grading and now thats clearly gone. Its so obvious they knew they needed to change and did just that to keep market share, but didn’t really announce it as that would be something deadly to admit and not sure how they could without issue.

You could easily argue CGC had a slight change to their grading, but the cards you have shown are pop 1 and pop 2 cards. Still hard to get a CGC 10, especially for vintage stuff.

On the Alakazam, there are only 14 copies submitted that were mint or better (9+). Its also unclear how many were graded before the change in the grading scale. I guarantee at least one because I graded a copy myself.

Hello, I am planning on getting 7 cards graded by Beckett Grading Services (BGS). 2 out of the 7 are autographed, so I would like a combo grade and an autograph authentication (no auto grade). What is the best way of going about this? I already made an order for the 7 cards and I identified that 2 of them are autographed. I might’ve heard from someone that I should have gotten the autographs authenticated by BAS first beforehand? Please let me know what I should do, or whether I should cancel my original order potentially.

Hi all!
I think I read here someone mentioning than when you submit to psa raw cards for regrading and you include the psa old label, they take that certificate out of the system? I cracked some psa cards for signing and was thinking about submitting them again for grading including the label if they remove the certificate from the population. Also, do they look at the grade when re grading? or they just take them out from the pop report

I would not send your labels in with your cards. If you are going to show them the previous grade, you should do a graded card review and let them handle cracking the case in the event the card deserves an upgrade.

If you plan to crack and resub, I would wait until you get the grades you’re after before mailing them the ejected labels (if you intend to correct the pop report, which is good of you).

Hey thank you!
No I am not opening the slabs for regrading and getting a chance of a higher grade, I am cracking them because this weekend I am going to an Arita event and would like the get them signed, and then resubmitted to PSA, so I would like the previous card get removed of the pop report, and get my cards re graded

Ah, sorry for assuming! Yeah I think you’re good to just include those labels. Might even help you ensure card holds the same grade. I’d just stick em to the card saver

I didn’t ship until August for the the July special.

Well now I’m annoyed because mine was entered 8/17 and is still in Research and ID.

Hi!
My two July submissions went into grading today also, one of them is perfectly fine but the other one shows as follows:

image1170×2532 170 KB
What does this mean? These cards are the Spanish neo genesis holo set, there were none graded on PSA before but I saw some German/French/Italian graded, so I just submitted to have them graded by PSA and I detailed them what they were when did the submission…
Typhlosion_Collector September 28, 2022, 9:35pm #5559

My final PSA middleman order is finally coming back.
February 2021. Sad thing was the ones I sent later came back first.

It will be one of these reasons.

If your card is returned as ungradable, that determination was made based on one of the following reasons:

N-1 Evidence of Trimming - When a card’s edge appears to have been altered. A card doctor may use scissors, scalpel, cutter, or any other sharp instrument. A card that appears trimmed: A hooked appearance along the edge, unusually sharp or uncommon edges for the issue, an inconsistent tone to the color of the edge in question or a wavy, unnatural look to the edges.

N-2 Evidence of Restoration - When a card’s paper stock appears to have been built up - for example, when ripped corners are built up to look like new corners.

N-3 Evidence of Recoloration - Where a card’s color appears to have been artificially improved.

N-4 Questionable Authenticity - This is the term used when a card appears to be counterfeit or when the autograph is deemed to be not genuine.

N-5 Altered Stock - This includes, but is not limited to characteristics on the card that appear to show some form of alteration such as paper restoration, crease/wrinkle pressing or enhanced gloss.

N-6 Minimum Size Requirement - When a card is significantly undersized according to factory specifications. You will not be charged the grading fee.

N-7 Evidence of Cleaning - When a whitener is used to whiten borders or a solution is used to remove wax, candy, gum or tobacco stains.

N-8 Miscut - This term is used when the factory cut is abnormal for the issue, causing the card’s edges to deviate from their intended appearance. Grading fees are not charged in this instance.

N-9 Don’t Grade - When we do not grade an issue. The cards may be oversized or an obscure issue. You will not be charged the grading fee.

N-0 Authentic Only - This means that PSA is only certifying that the item is genuine, without a numerical grade. This may be due to the existence of an alteration, one with malice or otherwise, a major defect or the original submitter may have requested that PSA encapsulate the card without a grade. The “Authentic” label means that the item, in our opinion, is real but nothing more.

AA Authentic Altered - This means that while PSA is certifying that the item is genuine, due to the existence of alterations, the item cannot receive a numerical grade. The term altered may mean that the card shows evidence of one or more of the following: trimming, recoloring, restoration, and/or cleaning. Items receiving the “Authentic Altered” designation, in our opinion, are genuine with the presence of some type of alteration. This is done on a case-by-case basis only, and must be notated on the submission form at the time of submission.

They aren’t grading Spanish Neo Genesis just yet. I’ve seen their lists for French, German, and Italian, but not Spanish.

Did you submit them specifically as a Spanish variant, or as the English variant? As far as I know, PSA now supports all of the foreign languages for WOTC sets.

As far as I know, PSA now supports all of the foreign languages for WOTC sets.

I was under this impression too. 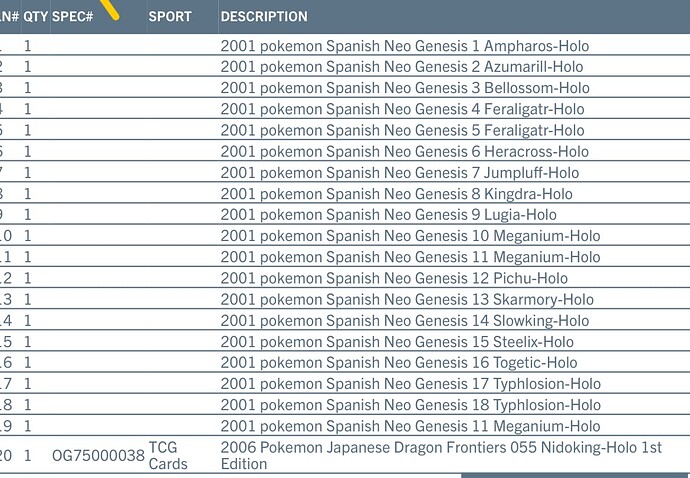 image1170×811 136 KB
That’s why I submitted them, as I understood they were grading any language cards, and out there there are German Italian and French cards graded, so why not grading spanish? I am really disappointed, not sure what to do now, I would try to contact them but I live in Spain and a phone call is impossible for me, and by email it takes forever for them to reply
1 Like
Dyl September 28, 2022, 10:18pm #5564

If you submitted these many cards with a NO GRADE / NO CHARGE note, then they are not grading Spanish Neo Genesis yet. My best guess is that PSA hasn’t compiled the card list on the website, therefore they cannot authenticate, grade, print out the corresponding labels, and track the cards on a population report.

I’m really sorry that this happened. How awful

It seems so yeah…. All them got the same message. Really disappointing, all my collection is on PSA and I wanted the Spanish neo genesis as well, I’ve seen a Spanish Neo genesis lugia graded on BGS so I guess I’ll have to grade them there, but shipping them back to Spain and re submitting them to BGS is a bit annoying

I just tried making a submission with Pokémon Spanish Genesis, and they didn’t have any cards listed. Normally they only grade cards if the card name pops up when you start searching for them in the search box.