It was an invitation-only event will be held on July 2nd 2017, few days before the official release of the Japanese version of Shining Legends. It was called the “100 Royal Mask Contest”

Besides the invited players, they also had a lottery system where anyone had a chance to participate.

Participants will be provided with 10 packs of pre-release enhancement expansion packs “Shining Legends” that are necessary for event participation free of charge (you can take them home after the event). One top prize winner will receive a special card limited to 100 in the world, The Royal Mask.

Edit: @hermit and @jaxlax21 beat me to the info.

@mrbubbles @hermit @jaxlax21 Thanks for the detailed responses! Now I understand its rarity and why it fetches so much

Sorry replied to the wrong thread at first @hermit :
My copy was ungraded so not sure it is really a good comparison, but I got it for $15k USD in December last year, it is a really clean copy though, not sure what it would grade as (I am a binder collector). @quuador might be a better source of pricing since I know his is graded (I think a 10? Might be a 9 though).

No worries! If I remb correctly, Quuador’s copy is a PSA10 (he spent ~5k USD). My cost price is somewhere between yours and Quuador’s. I will research further. Haha

I’ve searched back on the Discord/forum/eBay for sold listings, but not sure when the last The Masked Royal PSA-10 was confirmed sold for, since it doesn’t sell too often.

I did find some price points for how much they were available, although that doesn’t say too much since anyone could for example ask 10 millions, doesn’t mean it will or would sell for that amount…

But again, these are just advertisement prices, not actual sold prices, so it doesn’t say much. 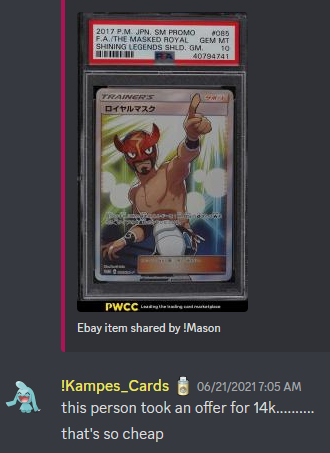 (which was originally posted for 50k USD Buyout with Best Offer enabled, to again state that the prices above doesn’t say too much): 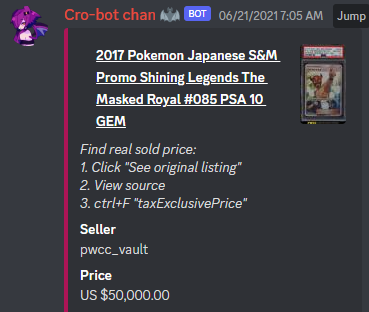 Anyway, 4M Jp. Yen is roughly 30.8k USD in the current exchange rate, so not too bad of an offer to be completely honest. Although it also wouldn’t surprise me if you’re able to get more with some patience, considering the amount of FA Supporter and Rare Card collectors out there, especially for a PSA-10.

PS: cash on delivery sounds dangerous unless you meet in person, so make sure to not get scammed if you do end up selling it…

what discord bot is that?

Not sure if @pfm made the bot or downloaded a plugin for it and modified it, but the bot will post that when an eBay link is put in a Discord chat message. The bot also does a lot of other thing, though.

Thanks for your input!

Just for info: The Mercari copy was relisted. The buyer backed out after long negotiation in the comment section. Haha

Yup, I will find a safe place to deal if I eventually sell the card.