Set of the Fortnight #1

At first I was like: Well my favorite is of course the Pikachu, duhh… But I decided to take a more objective look at the cards in the set than just my collection. I will mainly focus on artwork here.

So let’s start with my three least favorite artworks of the set (it’s always hard to pick one, so I’ll just make top 3s for these new Set posts

Of these I have the Grimer in my possession, and the other two I see for the first time now. The Muk barely looks like a Muk to me, and as you may have note from the general theme of all three, I usually dislike the simplistic artworks (although sometimes they have their charm).

As for my three favorite artworks:

(PS: Why can’t Bulbapedia have one size for all their miniature pictures…

)
Of these I have the Aerodactyl and Omanyte. And now that I see this Magnemite I’m probably going to buy it.

I like the story it tells for the Omanyte, and I really like the pose of both the Aerodactyl and Magnemite.

Btw, this was a pretty tough call. EX Legend Maker consists of A LOT of awesome artworks imo. I also really like the Kabutops pose, the Gorebyss, Kabuto, Delcatty, both Mews, Regirock and Registeel (Regice not so much personally). And there are a lot more to name that I like.

Seems like a great idea for a new series, @milhouse !

Maybe not the most popular ex series set overall but I still like it, lots of solid artwork starting from trainers all way to gold stars. Booster pack/box artwork is point on, especially in japanese products.

Some of favourite cards have to be Arcanine ex, Altaria ex and both Mews. Lanturn, Tentacruel, Sealeo and Voltorb look really decent as well. Only ones I probably dislike are Grimer/Muk.

That magnemite art is too sick! I actually really like the grimer art though @quuador I also think arcanine ex is also a really nice art as well as the gengar!

Ok, I’ve placed an order for a Holo EX Legend Maker Magnemite. Maybe these set posts for favorites and least favorites aren’t such a good idea after all.

I will buy all amazing artworks I’ve never seen before every two weeks and slowly get poorer. Ah well, luckily it was very cheap considering it was holo (4.75 USD including shipping to The Netherlands), and the Magnemite just looks awesome.

The omanyte art is one of my favorites from this set. Also absolutely love the Magnemite and Omanyte artwork. It feels like artwork that detailed and thoughtful just doesn’t show up anymore.

THESE ARRIVED WITH THE LOT EMERGERRD THERE MY FAVZ exs from the set. WHAT A SET EMERGERD

so glad to have these bad boyz baCK

I think this set has some of the best artwork for holos in the ex series. This set doesnt have as many of the bigger name pokemon as many other sets so it doesnt get looked at as much. I think its a under rated set and was easily available compared to the other sets.

I love this set, Arcanine ex and Flygon ex are some of my biggest favorites from the whole ex era. I also really like the way they did the reverse holo pattern on this set as well. Makes even a uncommon / common card look like a rare holo which is really cool

I always felt sorry for the poor lonely Omanyte

I adore this set. Probably in my top 3 favourites ever. Mr first ever gold star pull was a Regice out of 3 loose packs. I’ll never forget that feeling. The Regirock in the box I later opened kind of just topped it off.

But on a SLIGHTLY less biased note, it really is a beautiful set. It feels like an ex series version of fossil/jungle, and the whole theme of a mysterious forest is great. The holo and ex selections were flavourful and deliciously done too. Not to mention THOSE REVERSE HOLOS.

It was hard to narrow down my 3 favourite arts, but here we go. Honourable mention to the ‘tfw no gf’ Omanyte. Gorebyss is my guilty pleasure pokemon.

Skins does and owns all 7 copies of that card >>

There are seven versions.

It is what pokemon should be like. A mysterious creature that is rare and curious.

In the spirit of the thread: Here’s all seven versions that I count anyway XD; plus a bonus custom full art.

This is the set that I’m currently working on completing, hopefully in the near future I can do it. Anyways, to be brutally honest I can’t say I’m blown away by the overall quality of the artworks in this set. (I’m completing this because when I found my old Pokemon cards after all these years it turned out I had the most EX Legend Maker cards so that’s the most attainable goal rn)

That being said, there ARE some really nice cards there

Here are some that stand out to me:

I really like the cosmic foil on Mew, I think it complements this particular mysterious esoteric Pokemon quite well.

Also, what I’m interested in in this set is the “Legend Maker Stamp” sometimes seen on cards (like the one below) 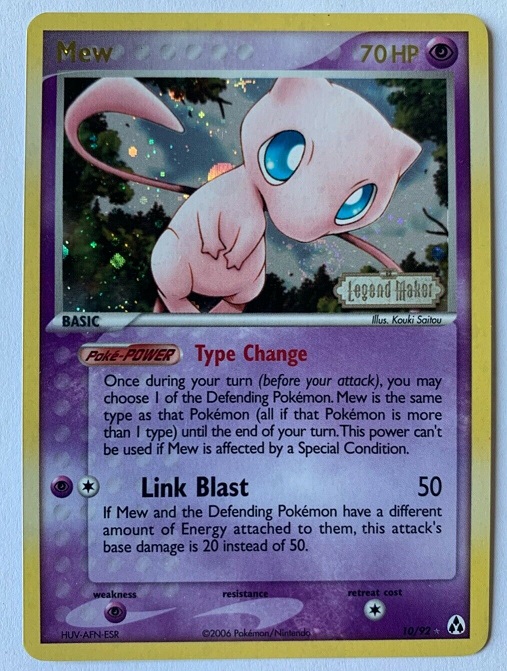 Does anybody know the story with that? I wasn’t able to find any info about that on Bulbapedia. Is every card in the set available with this stamp? I’ve seen quite many of them with it. Is it like a first print or something? I’d appreciate any info from anyone more educated on this set

Does anybody know the story with that? I wasn’t able to find any info about that on Bulbapedia. Is every card in the set available with this stamp? I’ve seen quite many of them with it. Is it like a first print or something? I’d appreciate any info from anyone more educated on this set

Yeah! Something I know about haha. Cards with the set stamped on them were the reverse holos. I think it started with EX Team Rocket Returns and continued through until EX Power Keepers. I dug into it too when I came back and saw some cards with the stamp on them. I really enjoyed the reverse holos like these over what we have now, kinda wish they’d bring it back someday!