Pretty quickly the stories all begin to sound the same.

My parents hated Pokémon. They did not want to support my interest in the cards. They thought it made me an obsessed maniac with no self-control. So without legitimate access to Pokémon I had to get creative and that creativity usually resulted in something immoral.

My parents wouldn’t buy me Pokémon Yellow for my birthday, so I stopped eating school lunch for several weeks and kept my lunch money in secret. When the eternity that was “a few weeks” passed and I still didn’t have enough, I mercilessly popped all the coins out of my father’s coin collection albums. I had my grandmother take me to K Mart and bought Pokémon Yellow with a bulging Ziploc bag of silver dollars, half dollars, quarters, and all the other small change I could muster. I was still short at the register, so my grandmother had to pay the rest. My parents were extremely angry, but I had gamed the system by “buying it with my own money.”

I went to a grown up party with my mother at the house of one of her coworkers. It was all adults drinking wine and talking about work and eating off of cheese plates. The only other kid at the party was younger than me and, to me, he was basically still a baby. I was supposed to go play in his room with him while the adults mingled in the main rooms of the house.

Unable to find anything to talk about or anything we wanted to play together, I just went through the other boy’s toy box while he told me what everything was and what it did. In his toy box was a Mew figurine in a Master Ball. I had never seen this before. I wanted this. Because I had no self control or shame, I immediately asked the boy if I could have it. He said no. I asked if I could just play with it for now and he said okay. I clung to it like treasure and tried to think of a way to steal it. It was too big to fit in my pocket.

When the moms came to check on us I said to his mom the other boy told me I could have the Mew. The boy heard me and said no he didn’t. I accused him of lying (zero shame) and that he was “going back on his promise.” His mother politely diffused the situation and said she herself liked the toy and didn’t want to give it away, but I could come play with it next time I visited. These lines might work on her younger son but they didn’t fool me. I asked if I could keep playing with it until it was time to go and she conceded.

When I got the chance, I stuffed the Master Ball up my pant leg. It was very obvious, but it was secure. Maybe if I just stood a certain way nobody would notice. As we got ready to leave I put my shoes on and tried to hide the hyper-extended pant cuff. I wore a lot of sweat pants at this time because my family was poor and they took longer to outgrow, so it was contained by the elastic cinch at the base of the leg. As long as I didn’t move too quickly, it should stay put.

When we got back to the car and started driving away, I desperately wanted to look at and play with my Mew toy. But I couldn’t do so without my mother seeing it and finding out I had taken in. Trying to “act natural”, and without the patience to just wait until we got home and play with it in secret, I exclaimed “it’s a good thing they didn’t let me have that toy, I forgot I had one in the car!” This was an insipid little kid attempt at deception, birthed from a brain that believed random coincidences such as that actually happened regularly. But I could tell my mother did not believe me, and I understand in retrospect she was way too humiliated to say anything to her coworker about it. Ever avoiding conflict, my mother said nothing of it at all.

All the stories are just like this. Sinister, selfish, and full of pathological deception to get what I wanted by any means necessary.

While I have a lot of stories like this from my boyhood and I try to look back on them with good humor I do feel embarrassed by these things I would do. I am not like that anymore, I have not been like that in an extremely long time, and I attempt to atone for my long first act of selfishness by practicing generosity today. I was not capable of empathy at that age. It is now one of my stronger qualities.

It’s a pity man, you had all the qualities required and are always welcome in the team Rocket if you change your mind 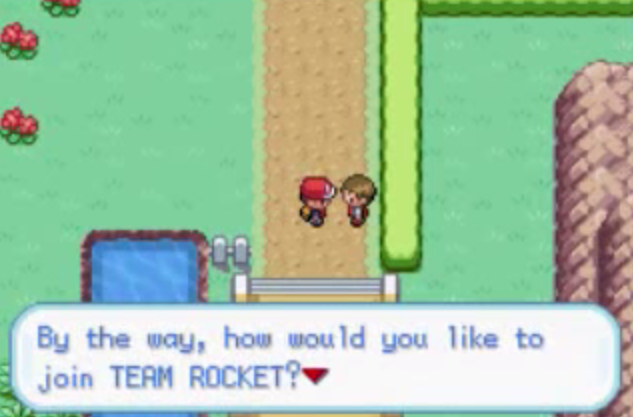 Here’s my Q, did it still follow here in game, after that? Or was the damage permanent? (I can’t remember… if I ever tried that)

IIRC it still followed when traded back, but when you would turn and click on it, the emote was furious. I had red, so it didn’t even follow me, I just wanted a Pikachu…the guilt!

Presented with no ethical option, you took the option available to you with the highest chance for success. You were a determined and clever little guttersnipe. I was like that too, but my parents (well, my mom, anyway) always gave me a practical and achievable way to get the things I wanted. So I got good at making plans, for those middle-tier things.

I do wonder what made you change your ways… You don’t have to tell. In our interactions, I’ve found you to be a thoughtful and considerate person.

This is the first time I’ve heard this expression and it’s already one of my favorite words.

It stems from a pivotal moment in my life where I was deeply, deeply depressed. I’d been on autopilot for months. I had a rival at the time who hated me, and I hated him, and we’d been going out of our way to make each other’s lives worse in the year it had been since we met. We worked together and I was his immediate supervisor and he got to see me at work all the time as a bitter, empty husk. He loved it. He watched his most hated peer have a fall from grace and had a front row seat to the marathon meltdown that ensued.

Then one night I was sobbing in the employee office and one of my staff members was trying to talk to me and help me through it. He comes up and he has this huge fucking grin like he’s just there to watch. I didn’t even have the energy to tell him off, I just rolled back in my chair and told him to leave me alone.

And his smile went away and he looked sad and after waiting a beat he started cautiously, calmly consoling me. At first I was just weirded out, which snapped me out of my spell a little bit. Why was this dude talking to me like this? I basically had him on perpetual dumpster duty the entire summer. He had no reason to be nice to me and a million reasons not to.

But over the next few days we kept talking. It was really strange but really effective to have heart to hearts with someone who had never been my friend. I knew they weren’t bullshitting. He talked a lot about his own mental health and life experiences. He’d had a really hard life, one that I needlessly made worse for him with our petty rivalry. I was so ashamed. But over the rest of the year we became inseparable. He helped me through the problems I was having and I started to turn it around.

Once I was doing better and our new friendship had really solidified, I asked him what made him reach out to me like that in the first place. And he said, I’ll never forget, “it was just hard to see you feeling that night the way I feel every day of my life.”

That was a huge inflection point for me and a major shift in my personality, perspective, and conduct. This was someone who had been through so much horrible shit and I was just one part of his awful life, and he still found the room in his heart to forgive me and try to help me because he knew he was someone who could.

Pretty much everything I believe and everything I do now 10 years later ties back to asking myself if I’m doing everything I can do for others. It’s all thanks to him.

Ah, the two major categories of Pokemon sins. On the one hand, game hacks and exploits…on the other, theft, breaking and entering, and burglary.

I remember a tall guy, wearing a black trench coat, came up to me when Fossil came out, and said “do you want to see a picture of my girlfriend?” And I said “sure”

Ever since then I had a crush on her

This is more of a sin of both my brother and I.

Back when I was really young and first got into Pokémon with Sapphire/Ruby, I managed to find a shiny Bagon and trained that all the way up to Salamence. Loved that thing. My brother did too. Only shiny Pokémon we had ever found between the 2. That file also had my friends legendary that I was holding onto while he restarted his game.

Now back then, I stuck to Ruby, and my brother to Sapphire so we had our own saves, until he decided to restart my file because he wanted to try Ruby. Lost my shiny. In retaliation, I deleted his save file, which we had used to keep track of our Toys R Us event mons and stuck him with a team full of Wrumples with no money for balls.

Petty, but I’d still do it again if he did that to me again. Didn’t find another shiny until post game Pearl years later. I still haven’t forgiven him.

I remember a tall guy, wearing a black trench coat,

Okay, I saw this going down a much darker road

Not so much a confession, but more of an “I told you so” moment. Before covid, I used to scrape through craigslist in the major city that I live in to see if there was anything worth going after. I found a guy selling his childhood pokemon binder. It was an…alrightish…deal, so I bit and reached out to him. He had a binder of mostly neo era, fossil, and jungle cards. He had maybe 25ish holos, but among them were a shining tyranitar, holo neo ho-oh, and a few other goodies. I didn’t promise to buy them from him because the condition was hard to tell from the pictures, so we met in a bar and I went through the cards.
Based on condition (the shining tyranitar was pretty beaten up), I offered 300 USD for the whole binder. He declined politely, and said he would try his luck on ebay.
3 weeks later, he texted me out of the blue and said that he sold it on ebay at auction for 295.
TOLD HIM SO ha.