Piplup has been my favorite Pokémon ever since I saw Dawn’s Piplup debut in the anime when I was a child (move over, Vaporeon, a new water type takes your number 1 spot), and I’ve been collecting Piplup, Prinplup, and Empoleon since their release. Piplup was my starter in Platinum (my very first Pokémon game that was 100% mine and not just borrowed from a friend, shared with my sister, or rented from a Family Video for the weekend), and I fell even more in love with the little blue penguin and its family line.

As a result of my Piplup collection starting young, a lot of my older cards are in less-than-ideal condition, and although admittedly, I did take decently good care of my favorites, I also liked holding and handling them a lot, so most, if not all of the edges have some wear and/or silvering. If I’m being honest, that just makes those that much more special to me though!

Over the years, I’ve fallen in and out of collecting consistently, but my love of Piplup hasn’t waned! I started really organizing my collection back in late 2019 and early 2020, focusing mainly on English releases (pictured down below), but I’ve recently decided to start expanding into other languages as well. Piplup cards have been printed in 13 different languages afaik, and my ultimate goal is to collect all of them. Realistically, I know I’ll never get my hands on some of the more expensive/limited cards (looking at you, SD07 Piplup), but a person can dream!

Included in this collection are Piplup, Prinplup, Empoleon, their cameos, and Dawn/Hikari/Akari and their respective cameos as well. Spreadsheet here (English, Japanese, and most Korean cards are in their language-specific names, with everything else is in English so I can read it!): [Spreadsheet](Piplup Pokémon Card Collection - Google Sheets]

Really cool collection, and the 3D card is absolutely lovely.
Good luck if you aim to collect in all languages!

Really cool collection, and the 3D card is absolutely lovely.
Good luck if you aim to collect in all languages!

Thank you so much, I appreciate it! Finding languages outside of English/Japanese is going to be a bit of a pain I feel like, but hunting cards is all part of the fun imo.

The Empoleon and Prinplup are both from the 2008 World’s deck and have the promotional back. The Majestic Dawn Piplup reverse holo (the one with the berry) I was starting to doubt even existed, and I probably paid too much for it considering the condition, but I’m happy to finally have it in my possession, so I don’t care too terribly much.

The other Piplup is officially my first Japanese Piplup! Although it wasn’t the first I ordered, it was the first to come in, and by pure coincidence goes with the rest of the CGI artwork today.

Last but not least, in reality, I’m actually most excited for the Roseanne’s Research. This one is the 2010 World’s deck signed version, and has been strangely difficult to get ahold of compared to the other deck variants! 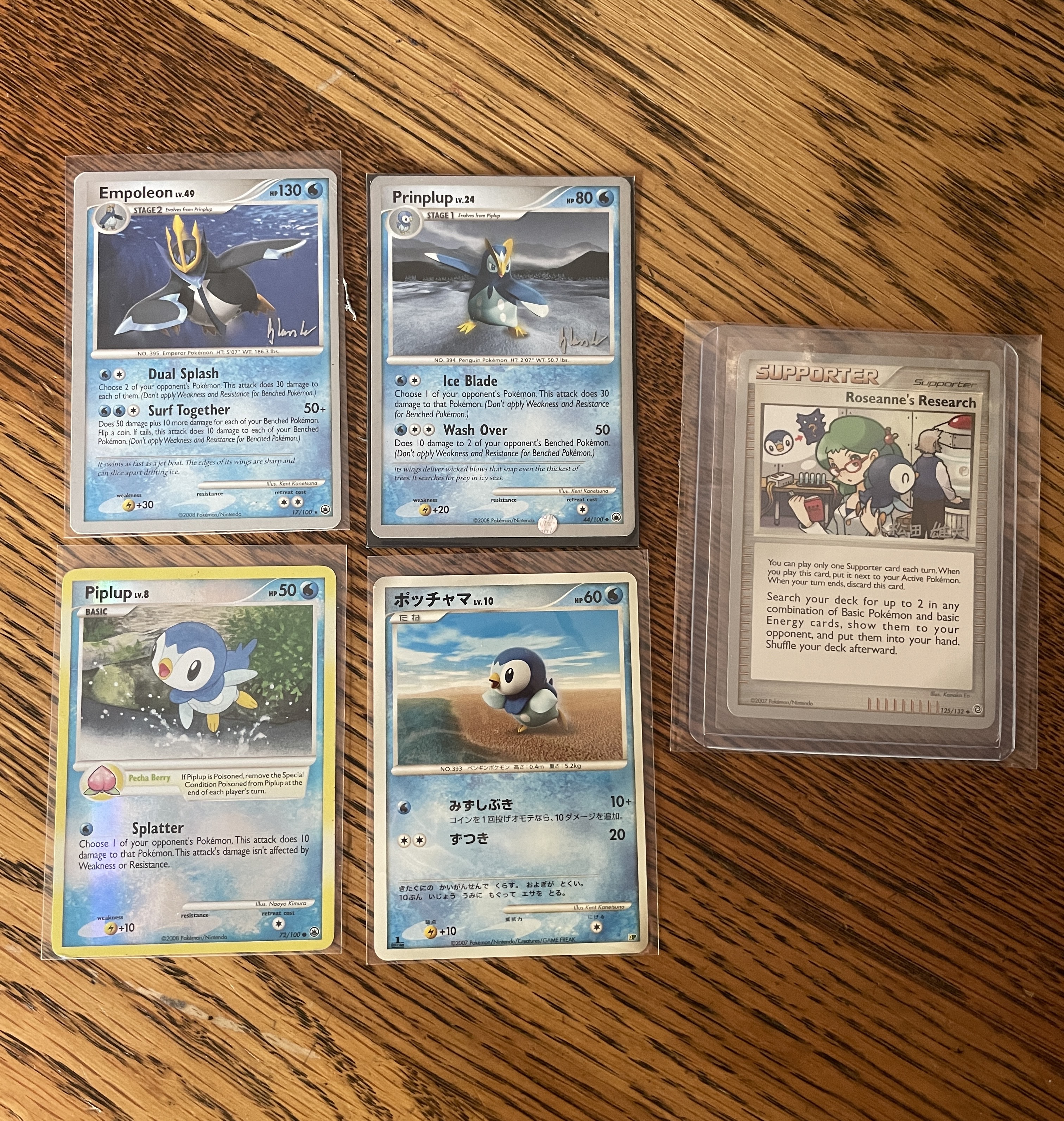 Today’s update is (mostly) Japanese this time around!

I found some good deals recently, so I decided to go ahead and pick up a few of my favorites. My absolute favorite Piplup is the CHR (a bit obvious), so getting it in Japanese is particularly exciting.

The English card of this batch is a trainer kit Piplup I’ve been hunting for quite some time- it was listed as coming from the other promo kit that contains Piplup, so it was pure luck I happened to come across it searching for cards I still need. 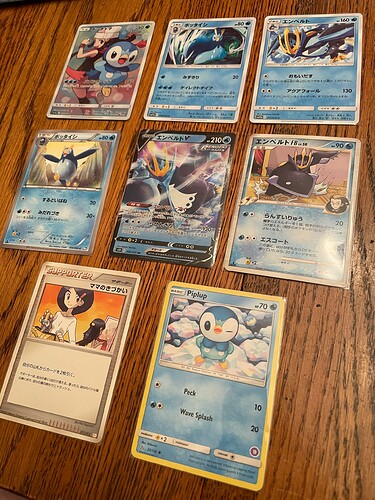 In other news, I got a new binder! This one is a 9-pocket and holds quite a few more cards than the 4-pocket, so I’ll be updating the main post here with the new layout when I can.

love this, I’m also collecting piplups right now and just picked up a couple of those roseanne’s researches

love this, I’m also collecting piplups right now and just picked up a couple of those roseanne’s researches

The Roseanne’s Research (and more recently, Roseanne’s Backup) are some of my favorites- they’re just so cute!

Today’s mail day is a compilation of the past few days here, so let’s get into it!

First up, we have another World’s promo as the one English card of this set! I only have a few more English cards left (that are going to be even a little possible to get ahold of), so I’m happy to have this one crossed off finally!

The other notable card in this set is the DP Entry pack Empoleon right next to the English Piplup- the foil on it is a pattern I haven’t seen too often and looks really pretty in person. Other than those two, the other cards are just Japanese bulk, but still nice to have nonetheless. 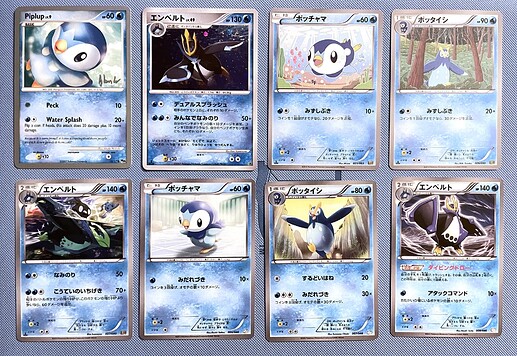 This set has the PPP Piplup promo (Japanese), another (damaged) World’s promo (English) - you can barely see it, but there are a lot of surface scratches on it, and the back is in rough shape. Since it’s going to be a binder copy, I don’t particularly mind that much at the moment, but I may replace it in the future if I can find one.

The Empoleon LV. X in Japanese was a great find that I’m also really happy about! The English version was my first Empoleon card, and having the Japanese is really exciting as well. 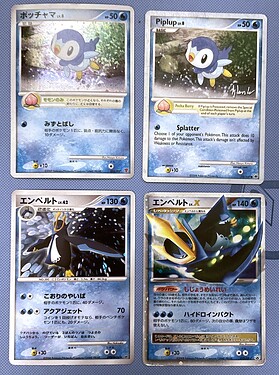 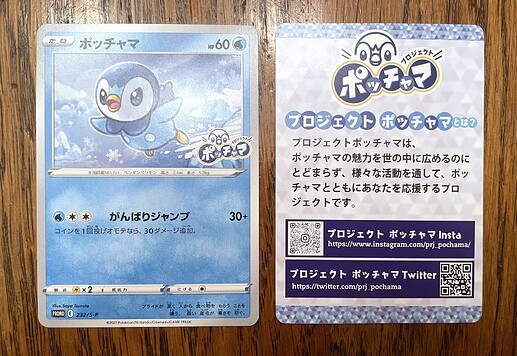 The last two cards feature Dawn/Akari! The left is one of the Advent of Arceus movie promo, and the right is from Dark Phantasma. I follow the artist of the Dark Phantasma card over on Twitter, and instantly fell in love with it. Though it doesn’t directly feature Piplup, is does have an Akari cameo, so into the collection it goes! It’s also just a gorgeous card in the end. 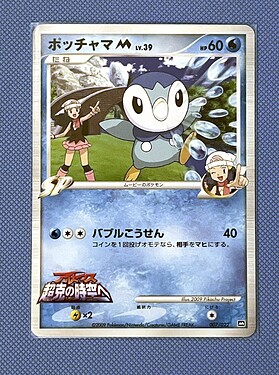 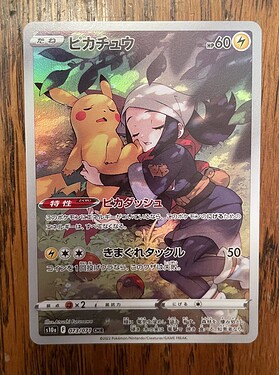 Your Piplup-line collection is comprehensive af! Im in the process of building a Turtwig-line collection and I feel the same exact way about the New York 08 stamp turtwig lol. Best of luck!

Your Piplup-line collection is comprehensive af! Im in the process of building a Turtwig-line collection and I feel the same exact way about the New York 08 stamp turtwig lol. Best of luck

I’ve pretty much given up on ever acquiring the San Diego stamp Piplup- even if it did pop up for sale, there’s no way I could justify the price for one card at the moment. The elusive stamped ones really throw a wrench into comprehensive collections, lol.

Full-line collections are always so cool to me- best of luck with your Turtwigs (and Grotles and Torterras)!

Awesome collection! Not sure if you collect non-tcg items, but I saw the Pokemon Center dropped Dawn and Piplup canvas art today that looks really good and fits your collection well

Awesome collection! Not sure if you collect non-tcg items, but I saw the Pokemon Center dropped Dawn and Piplup canvas art today that looks really good and fits your collection well

Thank you, I hadn’t seen that! I absolutely love that artwork, it’s so cute- definitely will have to pick it up for the collection as well!

The main post has been updated with the new binder and new additions (finally!) Also added in a section in the spreadsheet for phone/transport/tosho/etc cards since I got my first transport card in the other day.

Missing from the binder is this lovely Pokémon Day Piplup, courtesy of @TorterraSimp - thank you again for letting me purchase it from you! He’ll be going in the binder soon, but I had already taken photos of the binder before the mail came today… next time though! 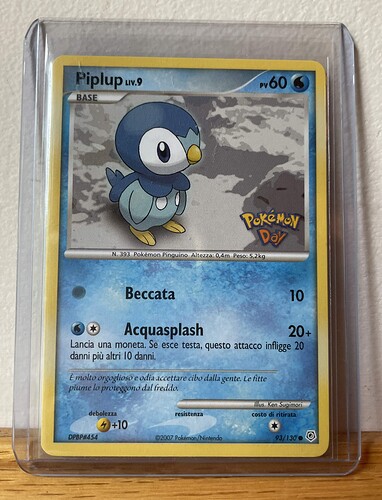 It was a pleasure doing business! Good luck filling out the rest of your binder! 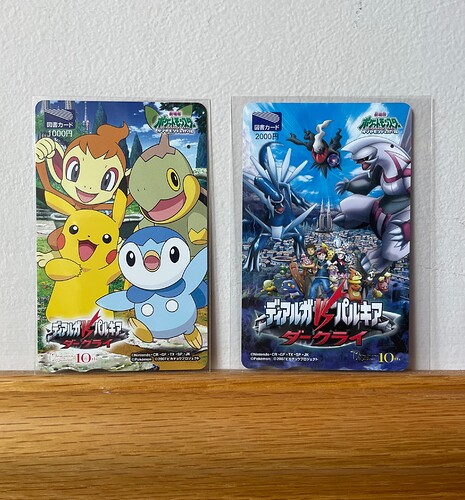 Two Tosho cards are here!! As I’ve mentioned before, while card-shaped, non-TCG items aren’t a main focus of my collection, I do like to pick them up when I can.

I didn’t even know there were perfect-fit sleeves for this style of card (they’re a little smaller than traditional PTCG cards), but they came together in one, so I’ll have to try to find more sleeves for the other cards I have of this size.

While I initially was going to wait until after Baltimore regionals to do an update here, the Chinese promo Piplup from @eeveeteam just came in today, and I am absolutely ecstatic! (Thank you again for the heads-up for this one!)

Also in this batch are the unlimited Empoleon 070/092 and the cosmos foil variant of Empoleon 037/172 found in the new Infernape V boxes! 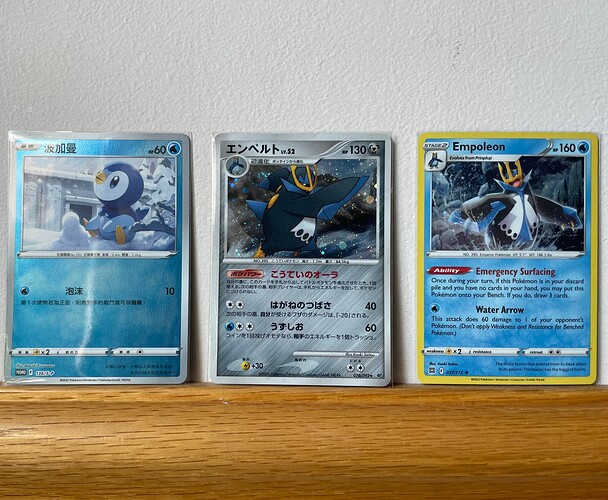 My first French card is here! I didn’t actually know that the Countdown Calendar promos were released in French until I stumbled across an eBay auction for this one looking for the English variant. I ended up snagging this one for a steal!

Alongside the snowflake stamp Piplup for this update, we also have a Japanese promo that is absolutely adorable. 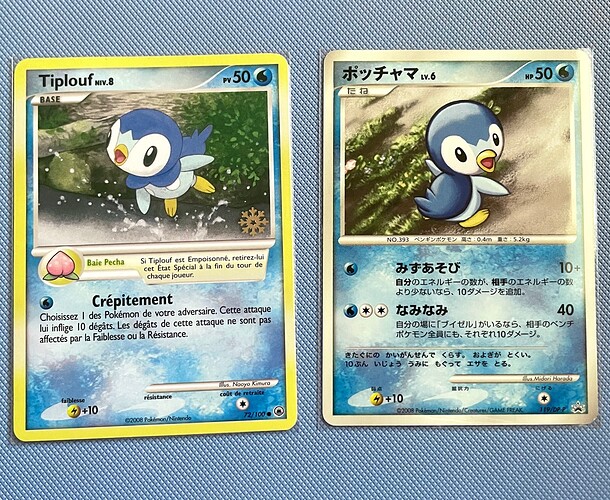 I am so, so excited for today’s update!

One of the most hard-to-find cards I’ve been on the hunt for over the past few years is this 2008 World Championship Promo Piplup! I got lucky stumbling across a mislabeled listing, but he’s finally here. The condition is exceptional as well, which I’m particularly happy about considering a lot of the deck cards I’ve come across have been less than ideal.

With this one in hand and another English card on the way, I’ll only need 5 more to complete my English goal of every (reasonably obtainable) line card, cameo, and variation! (SDCC Stamp and Tropical Winds are a pipe dream for now, but who knows.) 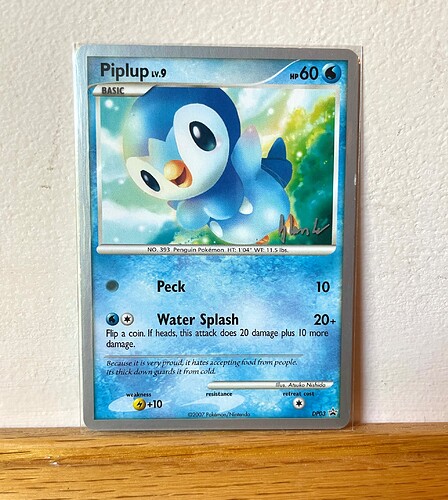 For the rest of the update, I have a little family photo! Included are my first Korean and Thai cards for the collection. I’ve said it before, but the CHR is by far my favorite art, and the Thai script is lovely as well.

The Korean non-holos are flimsier than other language prints, but the reverse holo feels thicker than it’s other language variants, which I think was interesting to note. 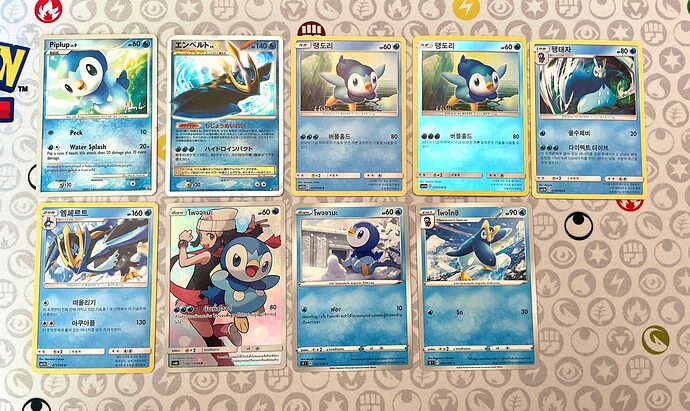 Really great to see again another species collector! What are the 5 realistic to get ones you are missing? Too bad starters usually always have a ton of stuff made so the probability that they end up in super expensive stuff always exists :E