In the 90’s the man Alfred R. Kahn got the license to pokemon and brought it over to the U.S. under his company 4kids entertainment. (Many of you will recognize this name.) A gew years after he did this, Al, who lives in New York, started a charity called First Responders Childrens Foundation. For the kids who lost parents on 9/11. Soon after he expanded it nation wide with the help of his wife, Jillian, whobis now CEO of the company. We’ve been talking about signatures on Pokemon cards, and since he, the man who is responsible for all of our childhoods, has only signed a couple in his life, we thought it’d give the the cards an additional boost in value. We’ve decided to donate two cards. A base set unlimited Charizard which i think would get a psa 8. And an aquapolis Gyarados. Something i also think would get minimum a psa 8.
The details on how to get these cards are on the flyer. And ALL of the proceeds will go to his charity. Let me know if you have any questions! 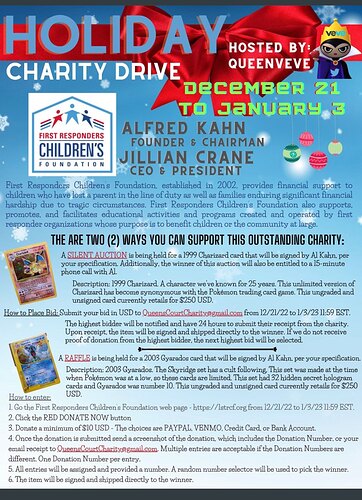 Interesting! Didn’t know the backstory to how we got the anime brought over here. You apparently get a 15 minute with Al Kahn if you win the Charizard.

What would you ask him?

Apparently Skyridge has a “cult following” according to this flyer. Who is part of the Skyridge cult?